[Solved] The right FET for the purpose

I wanted to protect my Lithium Ion battery from discharging too low overnight, so ordered the two FET's showin in this drawing, lifted from this page.

But they have turned out to be "surface mount" and too small for me to handle/solder, closely resembling these. 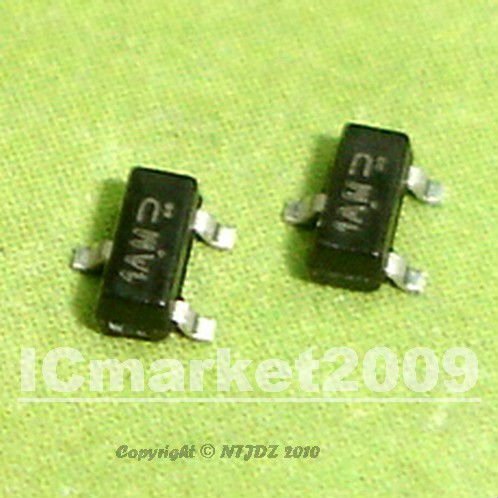 What I want is the same thing in a T0-92 package resembling this:

I've looked through FET datasheets and one's like I need are clearly out there; but I fail to understand what I'm reading, and need your help to know which are the right ones for my purpose, having the right characteristcs for total shut off, very low voltage loss, etc.

I'm sure some of you guys know EXACTLY what will do the trick! ;)

Time to learn how to solder these ants.
If you want a low Vth (needed for a ~3volt supply), then you end up in the smd world.
I’m over 60, and have no problems soldering these on a circuit board.
Paste and hot air is the best, especially with ESD sensitive fets.
Once you know how to handle smd, you enter a whole new world of possibilities.
Leo…

I may have just answered my own question.

After submitting the above, I found a description for one of those tiny guys,

(far less technical than their datasheets) and then added "T0-92" to the phrase and searched again, this time for:

That took me to this page, and this page, which might be exactly what I need. You think?

Wawa: Time to learn how to solder these ants. ... Once you know how to handle smd, you enter a whole new world of possibilities. Leo..

I'll look into that, Leo. It WILL be a "whole new world" for me.

Vth (threshold voltage) is the main enemy in that circuit.

The VP2106 datasheet states a worst case "just starting to turn on" voltage of 3.5volt. Not ok for a 3volt (dead) battery.

You need a worst case Vth of 1-1.5volt for 3volt switching.

Those look like a SOT23 package, which if you get into smd components are not ants. They are more like cats and are easy enough to deal with. Myself, I try to stick to 0603 and bigger for passives but am not against using 0402. You just end up using more, not in the actual circuit, but because of the "Where did it go???"

Anyhow, in regards to your question, like wawa said, the gate threshold is too high for what you want to do. The P-ch mosfet is the problem. The P-ch is normally on, and you have to turn them off with a voltage on the gate (n-ch mosfet does this). That voltage has to be high enough to fully turn it off, otherwise it will act as a variable resistor according to how low the voltage is. If the battery falls to 2.6V, and the gate needs 3...it will never shut down. It will just act as a resistor and keep sending a lower voltage to the Arduino.

Ideally, the VgsTH should be below the brownout voltage. When the Arduino goes into brownout and resets, voltage is dropped at the n-ch gate, causing it to turn off. That allows the voltage from the battery to charge the base of the p-ch and turn it off, as long as the voltage is high enough to overcome the VgsTH.

I looked on digikey real quick and found this but like I said, the ON values need to match up to the reset voltages

Wawa: Vth (threshold voltage) is the main enemy in that circuit.

The VP2106 datasheet states a worst case "just starting to turn on" voltage of 3.5volt. Not ok for a 3volt (dead) battery.

You need a worst case Vth of 1-1.5volt for 3volt switching.

I had just ordered a few each of the above TO-92's, a few minutes before you answered.

With the knowledge of what you just explained, I feel more confident about making future choices.

In my case (hopefully) these T0-92's will still do the job, for I'm using a 9-volt battery to power a 5-volt Pro Minu Arduino. And the software in the Arduino decides when to cut power from the battery. The cut-off level I need is about 4.5-volts (I think), in a range where Arduino has not yet lost it's senses.

tinman13kup: Ideally, the VgsTH should be below the brownout voltage. When the Arduino goes into brownout and resets

And thank you too, Tin Man. You've provided more really good info. I'm not familiar with the "brownout" feature of Arduino, but it sounds like I can let Arduino decide when it's time to pull the plug, without adjusting software to do it. Now that I know about it, I'll experiment with how "brownout" works.

The only really good very-low Vgs fet I was aware of in TO-92 was discontinued earlier this year, the 5LN01SP. I snagged 100 each of them and the P-channel variant when they went LTB on digikey. Beautiful little things too - the difference between the gate voltage and drain-source voltage--- 1.5vgs to be legit on, and hold off 50 volts on the drain. Crying shame they dropped them.

If you don't want to try to solder down the ants (and - SOT-23 isn't that bad IMO - SOT-23-6 on the other hand is one of my least favorites to hand solder), I sell high performance low Vgs SOT-23 FETs soldered down onto breakout boards

For safety, I added a 10k resistor between the gate of the upper FET, and the three connections to it. (Not shown in schematic at top of page.) Without this resistor, if the upper FET's gate becomes internally shorted -- and the lower FET is either turned on or shorted -- this will make a direct connection across the battery with nothing to limit the current!

(The need for this occurred to me when I misplaced a wire on my breadboard model of the above, and smoked one FET. Amazingly, after cooling down, the FET still worked!)

CosmickGold: In my case (hopefully) these T0-92's will still do the job, for I'm using a 9-volt battery to power a 5-volt Pro Minu Arduino. And the software in the Arduino decides when to cut power from the battery. The cut-off level I need is about 4.5-volts (I think), in a range where Arduino has not yet lost it's senses.

9V batteries (assuming you're talking about a PP3) suck for anything that doesn't sip power, especially if you don't need the high voltage for something. Have you done a power budget for your project to calculate your expected battery life?

Wow! You certainly have some knowledge and smart ideas. What's stopping me at this point is that I'm too far along in the project to go back and make major changes now; though if I'd tried the 8 MHz version in the beginning, it might have made a number of things easier, like you said.

I need the higher voltage to cover the voltage drop in:

(1) the protection diode I'm using in case the customer tries to plug the battery in backwards. (I made that mistake myself, which destroyed the whole board. It took three days for me to solder up a replacement.)

(2) the 5v regulator needed by the analog chips on the board (helping to isolate them from digital noise).

(3) the slow fall of battery voltage as it gets drained by use.

With my present setup, the battery lasts about 10 hours of continual use, before requiring a recharge.

They probably wouldn't work in a 3.3 volt project, because of the higher Vth (threshold voltage) requirement (as pointed out above). I chose them largely for the simplicity of soldering the T0-92 case. (I couldn't even SEE the leads on those "ants"!)

Also since my posts above, I've discovered controlling the FET's by the Arduino's "brownout" function is not a good idea. The "brownout" function in the Atmega chip is turned off by default, and turning it on is a complicated advanced-programming process that cannot be reached by a simple "sketch". So instead, I'm including the line: analogReference(INTERNAL); in setup(), which makes the range of the analog inputs reach from 0V to exactly 1.1V independent of supply voltages. Then measuring the center point of a resistance bridge between B+ and Ground (consisting of a 10M Ohm resistor and a 100M Ohm resistor) tells the sketch when to shut off the power to the whole board, via the FETs.

I guess I'm still a bit confused. Your schematic in the first post clearly shows a 3V battery, and you say you are using Li-Ion. But in replay #6 you say you are using a 9V battery. Are you using 2 different batteries for this, or are you stacking 3 Li-Ions in series to get higher voltage?

Since I don't know any details of your project I don't know if 10 hrs of battery life is any good or not, but it's possible that you're doing wasteful things. Do you use sleep modes anywhere in your sketch?

Jiggy-Ninja: Your schematic in the first post clearly shows a 3V battery.... But in replay #6 you say you are using a 9V battery.

I see how I've been very unclear. The schematic in the first post was copied from the internet, simply to show the circuit for me to use. They used 3-volts. I am only using their circuit with 9-volts.

It only needs to run through one night's sleep, so running 10 hours on a single charge is perfect. Then, the battery goes into the charger to prepare for the next night's use. I use no sleep modes since I don't want to miss anything during the night.

10 hours run time is pretty close to the margin for "all night" - it doesn't take too long before rechargeable batteries start losing capacity (especially if you are using the full capacity of the battery each time).