Hi,
on my self made board with a 328P-AU (TQFP) there is an ISP interface and a socket to connect a FOCA USB to serial converter. The intention is first to burn the bootloader via ISP and then to use FOCA interface to upload sketches via the bootloader and test them with the Serial Monitor.

Then I tested the FOCA interface with a very simple sketch loaded via ISP:

The FOCA interface works fine. Every time when I typed a character into the Serial Monitor it was echoed on the display. So serial input and serial output are ok.
A 100nF capacitor is connected between DTR pin of FOCA (pin 5) and the reset pin of the controller, see the attached image. 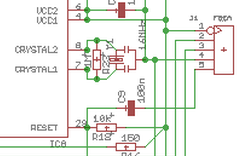 What is wrong? What can I try further?

I don’t understand “uploading a program via the bootloader “- doesn’t make sense.

So , to do this , on the Arduino IDE you should be uploading using the “arrow” at the top

After several trials now it works. I don't understand why it took several trials but in the end I got what I wanted: simple editing sketches, testing with Serial Monitor, within the IDE.