Hi all… I think I might be getting an Arduino kit for Christmas, and I’m thinking of all the possibilities. I’m a complete and utter noob with electronics, but I’ve programmed for many years and love seeing a blend of form and function. Anyways, that’s me…

The concept: For one of my first non-tutorial projects, I’d like to set up a sound-activated Neopixel 24-LED ring inside my baritone ukulele (baritones are large ukes, almost the size of a small guitar). I’d install the ring inside, velcroed to the rear wall (I’m trying to be as non-destructive as possible). I want it so that the harder I play, the brighter the LEDs glow.

From the soundhole, I’ll run the wires outside and behind the saddle, which is where I intend to velcro the CPU and the 3xAAA power supply, a potentiometer to adjust sensitivity, and tape down the piezo element. I’ll then cover those elements with a velcroed scavenged bridge cover from a guitar or bass, or even attach them to the cover itself.

So… Here are my noob questions:

So, those are my noob questions. How would YOU go about this?

Thank you for the help!

Hi!
Just stumbled across your questions.
Maybe my last project gives some answers. 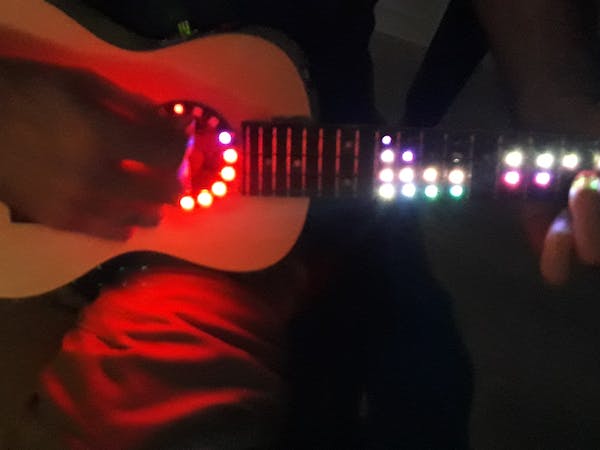 Ukulele illuminated by LED elements w/ illumination depending on result of FFT analysis of ukulele's sound. By torstengeppert.

You do realize this is a 6.5yr old post?