have any tried to use this printer and if so how is it done?

looking at them as an alternative to the well know printer from sparkfun/adafruit....

I work with similar printers, and have written a library for the parallel versions. Which interface does yours have?

I think the Star micro TSP printers have one of parallel, serial, usb, or ethernet.

If you can tell me what interface you have, I may be able to help.

the one i have my eyes on are a parallel one, but yes they also come in serial and usb and lan and wifi....

boelle:
the one i have my eyes on are a parallel one, but yes they also come in serial and usb and lan and wifi....

If your trying to control this printer from an arduino then RS232 would probably be an easier option than parallel. If you configure the printer for XON/XOFF handshaking then it's just 3 wires you need (RX, TX & GND). Parallel will require >9 wires. You may also need a RS232 controller something like this to ensure you don't damage the arduino.

The library I have written is for the parallel version. You can interface to the printer with either a PFC8574 IO expander OR a 74595 type shift register.

You can get the library code here: 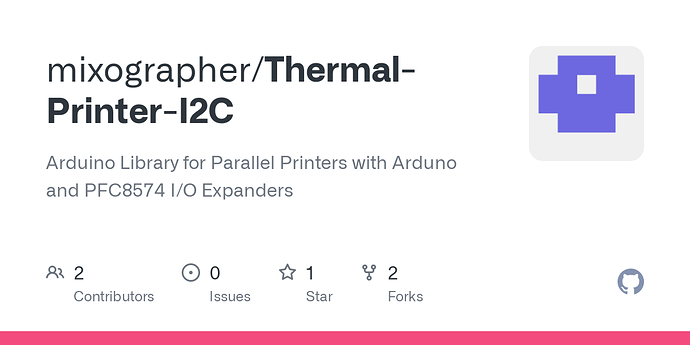 If you find a Serial version, you can build an interface with a max232 to give you the correct serial connections. I find it easier to use the parallel ones, but to me it's six of one, half-dozen of the other. I started with the parallel version because that was the kind I was able to get at the surplus shop for just a few US dollars. Now if I find a serial one cheap, I order the parallel card from ebay and convert it.

The usb interfaces are neat if you want to connect it to a raspberry pi of beagle bone. Those are also readily available on ebay.

thanks a bunch.... can always pick an arduino with enough lines.... and well shoot me but could pick a clone so the loss it not that big

should they be more easy to deal with? have anyone tried one?

Those are nice printers too. The paper is a bit wider in the star. Other than that, they will be mostly the same. The Epsons are also available as USB, serial, parallel or Ethernet. Find the one that you get for a good price, that looks in clean shape. The software you write will be the same for Epson or Star (or CBM for that matter).

always good to have options

got one of the epsons.... now i just have to make a level shifter and connect it to the uno...

stupid Q.... but should i still use your lib for the serial version of the EPSON TM-T88II ?

pulled the interface board and there are 2 max 202 chips in there... http://www.maximintegrated.com/datasheet/index.mvp/id/1369

could i tap in to those or will i need to build some external circuit?

Hi. my library is only for parallel printers. You should be able to find libraries for serialprinters,
or just find an ESC/POS command manual online and send serial data to the printef
without a library.

have set it for XON/XOFF, 8 bits, no parity check,

but what is the best choice for parity selection? even or odd?

I don't know much about the serial printers. you should leave it as is with
xon/xoff, 8 bits and no parity, unless the library you use says something different.

got printer working etc.... sketch almost there... have an compile issue i can figure...

code is in github here: https://github.com/laird/OSCommerceClient/blob/master/OSCommerce/OSCommerce.ino

would be very happy for some pointers.... lib for the printer is taken from here: problem solved... it was the define statement that screwed up