I have been working on a Steampunk FM Radio receiver for a while now. It works and looks pretty good, but there are a few things I would like to improve.

It uses an ATTiny45 (programmed with Arduino IDE) talking I2C to a TEA5767 FM radio module that I found on eBay. 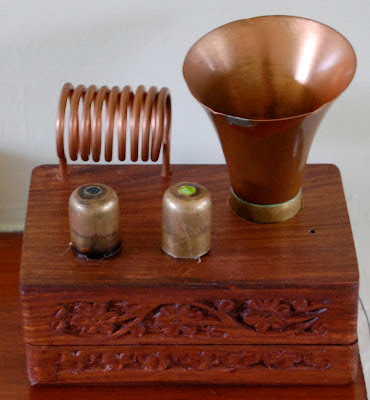 Is there actual steam through that coil? It looks like there could be. :)

Is there actual steam through that coil? It looks like there could be.

no, but I was tempted, I also wanted to make the aerial fold and unfold with a 9g servo in the box and half way along it, but it all just got too complicated.

How does it sound?

If you go to this http://futureeverything.org/handmade-2/ I am planning to show how steampunk would cope with 3D glasses.

I am planning to show how steampunk would cope with 3D glasses.

Would that happen to be brass and leather goggles with one red and one blue glass?

I'll have to go now.

No it involves rotating motors driving shutters, not exactly head mounting but a bit of fun.

Grumpy_Mike: I am planning to show how steampunk would cope with 3D glasses.

I'm not sure I understand...

During the Victorian era, there were more than a few methods in common production and use to allow for 3D viewing (albeit mainly still images; Edison patented a stereoscopic kinetoscope, for instance); the stereoscope being, of course, the most commonly known.

This is the thing I find fascinating about the 19th century: In many cases, ideas that are floated in the "steampunk" crowd either were actually done during the period or were experimented with in some fashion. In many case, what is left over was successfully implemented during the Edwardian period (though technically that was in the 20th century).