What really makes Arduino Dum/Uno boards appealing for me is the fact they come in a socket and you can simply lift them out....

And It has loads of advantages as far as i'm concerned...

Yeah you could argue you can replace them (30 minute job) but I find myself lifting it out quite often these days and swapping just the microprocessors without having remove the entire board.

So for the people like the ability to easily lift a chip in and out for all of it's advantages...

What's your thought on forced surface mounted chips? maybe some kind of ziff socket similar to PC just drop it in.... will be the future? I bloody hope so!

Using the DIP package makes a lot of sense on a prototyping board (read Arduino) for the reasons you list. Once I have a project fairly well settled, I'll often make a custom PC board. At that point, if space is a consideration, then a surface mount part may be the way to go.

Seems like its time to come up with surface mount to pin adapter, and a board with pin sockets, so that if one blows the uC another could be plugged in its place.
Of course, the USB/Serial chip is often damaged also, so a more modular aprroach makes more sense.
This card is in the middle - still a DIP processor package, USB/Serial can be on board or off board, the regulators can be easily replaced if damaged, and no autopower switching for 2 less parts to be damaged by stray 12V signals.
'1284 is a nice chip - 32 IO, dual hardware serial ports, twice the SRAM of a '2560. 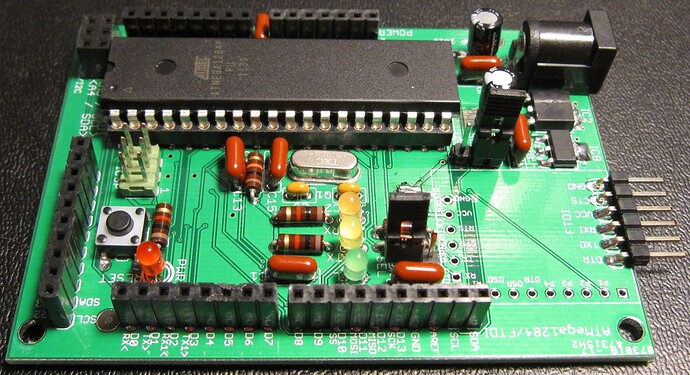 you can get zif sockets for many of the square packages, problem is, they are still surface mount.

I like dip, but if I need to use a SMD part, its not that hard to make a breakout board

Agreed, breakout boards are not hard.
These 328mini and 1284mini are basically breakout boards with a few parts added to make an arduino-equivalent less regulator & USB interface.
Straight breakout with no parts added are likely to be found on e-bay or at schmartboard.com 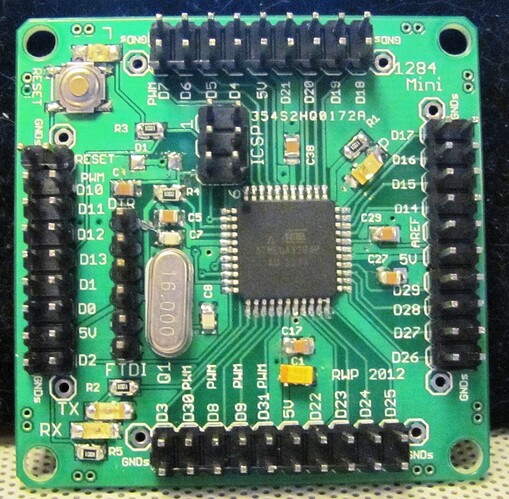 So, if start with something like this, and do the same for the 16U2, and then redo the mega board to accept pinned-out parts ... 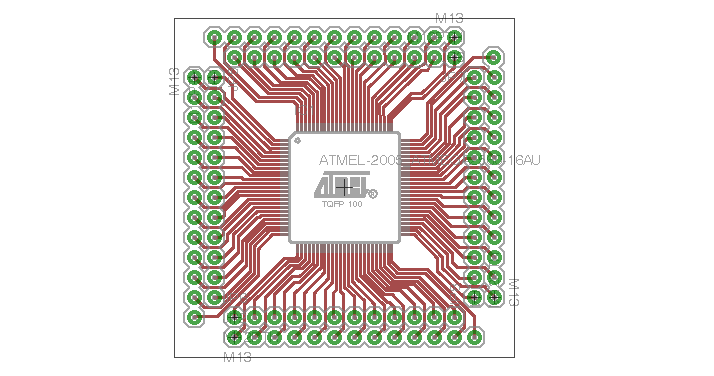 - it would be good to be able to pop the device off your keyring and stick in the back of someone's computer and then have the program do "spooky" things..

like move your mouse around and type messages from "beyond the grave" you'd need to be quick though, next time April Fool... move the mouse around say you have $1Million Owing, all you do is stick it in someone's pc at work or a laptop and walk off and wait

- since you're able to control the mouse click the keyboard, you could have a lot of fun, you could include discrete components, eg a listening device a pizeo speaker on an analog pin.... or some trickery for system commands, think the Leonardo but on a keyring, you're essentially putting as minimal components with a bit of the board that sticks out and acts as the male USB plug, a little push clip to release it from your keyring, when nobodys looking, place it in.... since it acts as a HID, there's (not that i know of....?!?! and where if so? lol) no way of reading from other USB devices, eg, you can't keylog a user, i'd like to be able to press 2 keys on the keyboard and have the device perform an action?... i really hope i'm wrong because i got a great copy and paste tool using a virtual keyboard, but if i can't activate it via some key press to use the function there's little point really is there...

cheap as possible in mass design, with chip, without chip etc, how about some kind of Vote to idea's put forward to actually prototype and sell, i'm not here to make money and if this suggestion turned out popular and you make a little fortune from it , all that i ask is one thing.... Send Me one or 2

lol... and if not you, whoever can or is willing?

I'm going to sort of cross thread to avoid highjacking this further.

Teensy with pins isn't so far off. I'm looking at the new 3.0, capable of USB hosting.

Seriously, I can't solder any of this tiny $#!+. I shake too much. I either get cold joints or burnt chips.

GoForSmoke:
Seriously, I can't solder any of this tiny $#!+. I shake too much. I either get cold joints or burnt chips.

Do what I did: get yourself a skillet.

GoForSmoke:
Teensy with pins isn't so far off. I'm looking at the new 3.0, capable of USB hosting.

Seriously, I can't solder any of this tiny $#!+. I shake too much. I either get cold joints or burnt chips.

Shaking huh wow... I Can't remember which it is now, I read that to stop shaking you can try something illegal if it were to ever cross paths with you lol, if it ever got that severe.. but.

This guy claims, you take a small few (look it up for precise details) cuttings of magic mushrooms, this is used to treat cluster headaches, stops them dead, and I have a feeling the same part of the nervous system also is the part (unless i read wrongly) that deals with neuron related diseases, anyway long story short...

cut the mushroom out to the size you'd see on a eraser/rubber at the end of an old school pencil, and a shot glass with a shot of your fav tittle in shot form ..

The magic mushroom in small dose, will stop the shakes, but you will feel floaty even from such a small dose, so the euphoria is dulled by the shot of alcohol

If it works, get the teensy and the pins to solder out

Skillet? Are you suggesting I fry my parts? I've done that already! That poor little SD adapter from PJRC (the Teensy folks) never stood a chance, sniff.

The tremor that I had since an injury in 1962 got bad after 'complications' from a whole series of long OR-table rides in 2000. Some days it's less but on the .1 inch scale it takes me a while to get the tip to touch just the spot I want.

After that I tend to hold it there too long. A neighbor suggested using heat sinks to protect parts.

In time with practice... who knows? I did improve a bot after watching an Aussie soldering tutorial, there seems to be a lot of electronics do-it's and wizards Down-Under.

GoForSmoke:
Skillet? Are you suggesting I fry my parts?

Then you had too much heat applied. Slow and steady. Follow the reflow chart for any component and be patient. I've used a regular frying pan before I bought a skillet. I'd set the stove to medium heat and let the PCB soak up the heat for a while. This causes it to smoke a bit as the solder paste starts to dry out. Then crank it up to medium-high and watch the solder paste flow. Done.

I will say this, the very first PCB I did, I scorched it, completely destroying it. Then I started playing with the heat till I got it right. Now I can have plastic parts (like SMT connectors, or a USB header) and nothing gets melted or destroyed.

I want to solder the regular through hole stuff without damaging the tiny bits so close.
Yes, my solder 'skillz' are that lame.

I was just trying to solder header pins into the holes on the SD adapter. Lookit how small!
http://www.pjrc.com/store/sd_adaptor.html

I have other adapters with pins coming from elsewhere... sorry PJRC I do want to support your work and ferociously want to get a Teensy 3.0 with pins when available, ohhhh yes -- USB hosting!

Here's the top side of the 2560 standalone board I working on. The 22pf caps and crystal will be mounted on the underside. Looking at making a replaceable processor to go on various different peripheral boards depending on the package/case size and interfaces needed. This will have male headers mounted from the underside and the peripheral boards will have the female compliment. 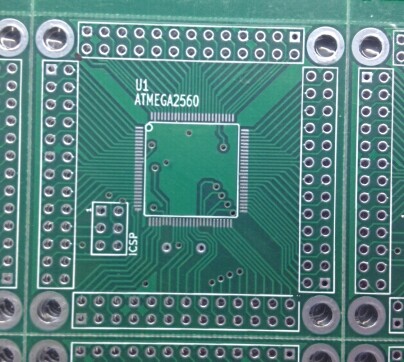 eh dont worry smoke theres 2 ways to the road ahead

you will get better

you wont, and it doesnt really matter, your not doing it for a living

2 cents though, if you haven't already, get a good soldering station, the xytronic I have costs like 45 bucks, hakko rip-offs cost about the same, and being able to get a good temp, decent tip and a much more comfortable handle will instantly improve anyone's solder skills

also dont be afraid to plant that tip on the board, if its in solid contact its not going to move ... which goes back to above, some 1/8th inch nail on a firestarter doesn't help

I will keep at it and try to do things that solder safe components and use sockets for the rest.

But I will save surface mount for after and then remember about the skillet. I worked at a plastics injection molding company, most we used melted around 400F-450F though it doesn't happen instantly.

OTOH maybe I can pass a wire through a plated hole at the edge of a Teensy, twist tight then slide some heat-shink up to insulate that. Those holes are awfully small, I just use lower-gauge wire?