so it had been sitting in my drawer for a while till i had a thought "i wonder if i can control it with my arduino", so i have come here to ask for advice before proceeding.

i have 2 arduinos, a mega 2560 and a UNO, im guessing either one of these will be fine, im not quite sure how to proceed with getting the arduino to pump data/commands into the board to display something like, scrolling text, or a clock ect, nor am i sure of which pin's from the display board to plug into what on the arduino as i am not familiar with the HT1632C's, any help or guidance, or even some more light shed on this would be great and will be many 1000's of thank you's.

Well, you happen to be in luck! 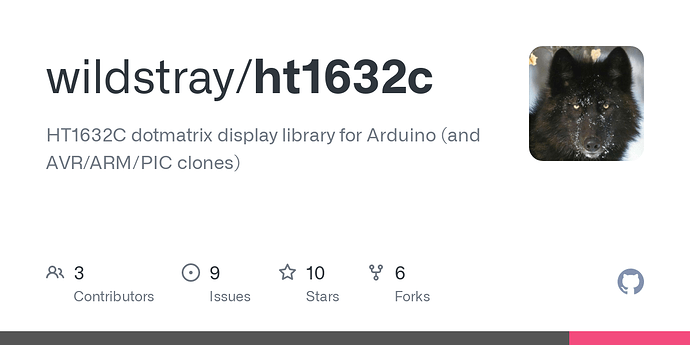 These are sold by dangerous prototypes and adafruit. So plenty of information on controlling them from the Arduino.

Retroplayer:
Well, you happen to be in luck!

These are sold by dangerous prototypes and adafruit. So plenty of information on controlling them from the Arduino.

thanks for the link, very helpful, do you have any idea how they might have hooked the pins up from the display board to the arduino? thats the only thing i cannot seem to find at the moment.

Looking at the library, this is the constructor:

So looking at the example, they are declaring it like this (line 10 in demo.pde):

5V and GND would go to your power supply, but you should also connect the GND to the GND on your Arduino.