Take a look on what these guys are doing... 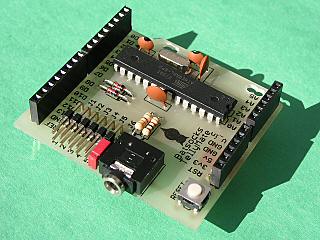 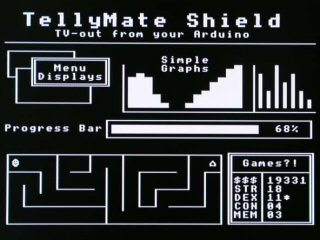 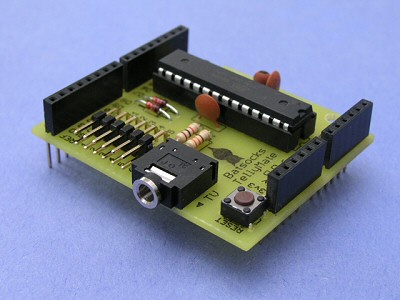 For a next batch, maybe some kind of drawing capability outside of chars alone?

Very cool product and their web site said they are now shipping wordwide so I had to go ahead and send for one.

Thanks for the tip.

Lot's of modern LCD TV's also have a compositive video input. I've ordered one to have a play with it.

What are you considering the video's full screen resolution?

Your website says the characters are 38x25 characters.
What are you considering the video's full screen resolution?

Display resolution is irrelevant. The limiting factor is that the AVR CPU used can only output so many dots per scan line...

That's what I'm asking - what is the display resolution of the overlayed graphic.

The TellyMate (and it's schematically identical sister, the TellyMate Shield) can only output characters.
Each character is 8 pixels wide by 9 pixels tall.

Technically, you could claim that means a resolution of 304 x 225 pixels, but that's really misleading, as they're not directly addressable, and are only driven via the ROM-based font (so aren't even user definable).

I have written an article about the design of the TellyMate which details how it all works.

The following diagram shows a small example of what's output:

Your article is very good; lots of technical meat to it!

i take it there is no sketch i can upload to the 168 so i can breadboard a simple tryout..

i plan on buying a telemate kit or shield at some point tho :3

but til then i want to output something to a tv

There's a bunch of code on his downloads page:

All the Batsocks download files in one place. Schemas, Code Samples and PDF versions of our articles and tutorials.

If you want to breadboard a TellyMate, there's circuit schematics (sch_tm_13.pdf) and source code (code_tm_19.zip) available from the Batsocks site.
If you just want to build one to talk to an Arduino, its actually rather simple, as TTL level serial signals are used (e.g. there is no need for the optional input conversion circuitry). You'll be able to do it with just a few components.

I've not previously had the firmware compiled for a Mega168 (M8 and M88 only), but I've just had a go, and it seems to be possible with a very simple source-code change: Anywhere that references AVR_IOM88_H should be changed to use AVR_IOMX8_H instead.

I'm afraid that I've not been able to verify that the (modified as above) firmware actually works on a M168 (I only own lowly M8 and M88s), but I can't see why it wouldn't.

I'm actually itching to try putting the TellyMate onto a 328 so that I can play with it's 2kb SRAM, but unfortunately all supplies of the 328 seem to have dried-up, and I don't think Atmel are interested in talking to the little-people about samples.

Thanks for your article, I really enjoyed reading it. As westfw said, lots of good technical info

Atmel seem to be having major problems with there samples system lately. I tried for 3 months to get samples for a work project of their 644 and a Xmegas ATXMEGA256A3 by using their web site but with no luck. Finally after complaining to their UK office I finally got samples of the 644, but still waiting for the Xmega

yea but i dont see an actuall sketch (pde) i can use..

i'm no programmer so i am lost easily when it comes to complex programming in C.

if i can take the code from one of the H files or something and paste that in the arduino IDE and upload that then what one and what needs to be done in order for it to work fine on a 168.

sometimes i need simple instructions XD. making the hardware isnt a problem cos the schematic looks simple enough and the parts are labeled clearly.

If I'm not mistaken, the source code for the tellymate targets the chip directly, meaning the HEX file needs to be uploaded to the chip with an external burner and avr-dude. I don't think there's a way to put the tellymate code directly onto an arduino using the IDE. You'd need to be comfortable working directly with the AVR chips and avr-gcc / avr-dude before attempting this I think.

To get stuff to appear on your TV screen using the TellyMate is easy. You just send the appropriate serial command to the device and voila!! Read the instruction manual.

To get stuff to appear on your TV screen using the TellyMate is easy. You just send the appropriate serial command to the device and voila!! Read the instruction manual.

Right, but The_Bongmaster doesn't have the TellyMate yet, he was looking to see if he could build his own on a breadboard and test it out if I read it correctly.