I've got a temperature probe from adafruit here: 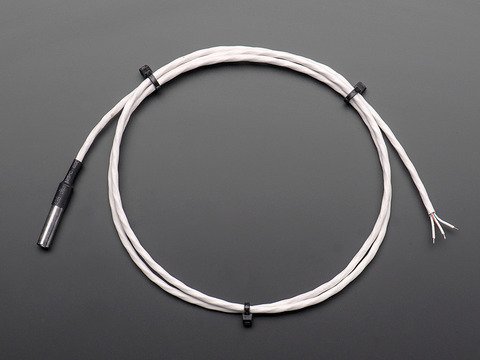 This is a pre-wired and waterproofed version of the DS18B20 sensor made with a PTFE wire cable. Handy for when you need to measure something far away, or in wet conditions. This sensor is a ...

Soldered the included resistor between the signal and hot wire, and supplied power via the Arduino Uno's 5v. Using analog pin 1. After using a sample code the probe reads 1.13 volts which translates into about 145 (63C) which is clearly not correct at room temperature.

I am something of a novice, can anyone lend me any assistance in figuring out where I went wrong?

This is a digital probe, you have it connected to an analog input.

Adafruit = good
DS18B20 = good
So far you have done well, you only have to read the description at the Adafruit page. It tells you that a library (two libraries in this case) are needed.

The DS18B20 is a digital sensor. The Arduino request the the temperature from it with a communication protocol using just 1 wire.
This is a tutorial: http://bildr.org/2011/07/ds18b20-arduino/

This is the page for the OneWire library: Arduino Playground - OneWire
It points to the library by Paul Stoffregen, just as Adafruit is pointing there.

Both Adafruit and Paul Stoffregen point to milesburton.com for the specific DS18B20 library.

Libraries can be installed as *.zip files and examples are included in the library.

Learn how to install additional libraries in the Arduino IDE 1.

Ahh I see, that fixed everyone. Thank you so much!!