I would like to make a test probe using LED,
This test probe is use only to test the power supply.
the power supply could an unknown voltage.
What i do have now is LED bicolour 2 pin.
what im think about rite now is that i would like to use the led to light up to show which polarity is the probe touching now,
if the correct direction green
if wrong direction red
if ac the both light up and well becoming yellowing

what i want to know is that can i limit the current that flow thru the circuit at the same level every voltage, i mean , if at 12V it will take only lets say 50ma but even at 240V it only take 50ma too...
but if i cant do that is there a way that i could make it at least to a point where at 240 it would be bright but at 12V although it is dim, it is kinda detectable under direct light?

The short answer is NO, designing a constant current generator with accurate compliance (the ability to be 'constant') with a range of 3V3 DC to 240VAC (240/3.3 = 72/1) would be a difficult task, a very difficult task. consider that there is a minimum current of 50 mA (Your Specification and somewhat above the "Normal" current for a common LED [20 mA max typ]) and that current must remain constant over a 72 to 1 range of supply voltage. If Not either the LED will be invisible at the lower end or destroyed at the upper end. You also neglected to state whether or not polarity or type (AC/DC) needed to be indicated. There are several different types of "Non Contact" voltage "Indicators" that can be purchased from various vendors that rely on a mosfet and electrostatic "Induction" for operation. There is no actual "Contact" with the circuit being tested.
The simple answer and the least expensive would be an inexpensive DMM. There are many that can be purchased for less than $10.00.

I agree, buy a DMM for measuring any voltages over 30-50V or so, but useful of course
for lower voltages too. I wouldn't want to be plugging strange devices onto 240VAC lines.

OTOH, for voltages less than 50V, all you need are your 2 Leds, wired back to back, and
in series with a 2.4K resistor. For Vin=50V, Led current = 20 mA. For Vin=12V, Led
current = 4 mA, which should still dimly light the Leds. Get some medium to high
brightness Leds.

I Still say to buy a DMM... (us old pharts are allowed...)
Measuring a voltage with an LED (and there are some very nice 2 color 2 lead devices) implies that there is enough current available to light the LED and not disturb the circuit being measured.
@ Oric... Remember the Simpson 630 (I have one for sale) and the Heathkit WMA?11 (CRS syndrome again) VTVM? (Jeez just LOOK at how that technology has changed).
There is one thing to be said though about drawing current to make voltage measurements though, It's a good way to find flaky power connections.
In the 90's I did a LOT of breadboarding and I quickly found a simple trick, While trying to find bad connections on Vcc and/or ground I used a 100 ohm resistor load at the load end of the breadboard across Vcc and Gnd and connected an audio signal tracer across it and started wiggling things... When I made the noise go away I had a fair idea that my problems weren't Vcc, Ground or anything that used those connections. Still works well today.
On that topic an Audio signal tracer with an old skool D'Arsonval meter makes a good poor mans oscilloscope for signals to perhaps a 100 KHz or so. When I find one tubes or not I buy it and restore it... Lately I haven't been very lucky but an LM386N makes an 'ok' substitute for less that 10 dollars ($25 if you have to buy a meter) DMM's and DPMs will also work but you loose the prime advantage which is integration of pulses by the meter pointer inertia. 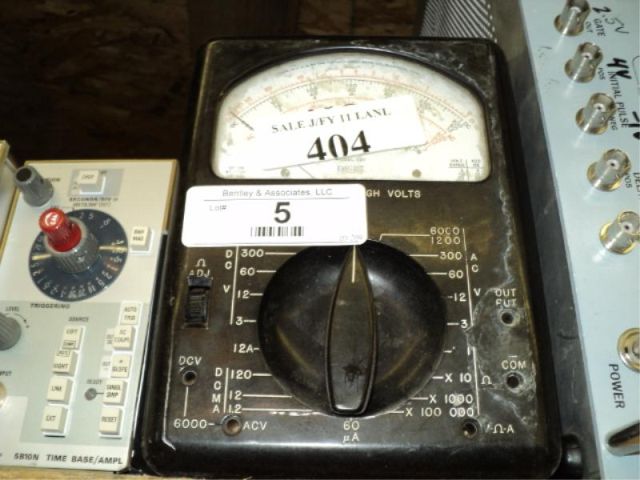 Audio signal tracer - not quite the same, but my BI DM27XT has a diode test mode, where
a short is signaled by a beep, and that I use to check out traces on all of my new pcbs.

Also, for simple probing, I have a piezo mounted on wires with 2 female header pins - if
only DC-voltage, it still signals with a click.

Also, a number of probes like I mentioned to OP, with females header pins and only 1 led.
They are always hanging off of my embedded controller boards during s.w. development.
[99% of my bds use male headers rather than female headers like Arduino].

The simple answer and the least expensive would be an inexpensive DMM. There are many that can be purchased for less than $10.00.

I agree with that. In my youth test gear was pretty expensive and even a voltmeter was something I had to wait awhile before I could afford one. Did finally get a Simpson 260 as a young adult and presently have several Fluke DVMs. Today there is no excuse to not own a digital multimeter, thus making a led as a voltmeter just a bad idea.

i have my own multimeter and all, but the thing is i just wondering if i could use this probe just as a polarity check. im thinkin that if i use a test pen that could handle 240 v and connected the bulb with and LED that should do it? and the negative to a long wire and a crocodile clip. just want to know if it is possible.

It's certainly possible to build a constant current regulator that will run from 240V, all it takes is a high voltage mosfet, a BJT and a couple of resistors. But I don't think it's a good idea. Even if you run the LEDs at just 5mA, the probe would have to dissipate more than 1W when monitoring 240V.

If you are prepared to power your probe from a battery instead of from the voltage you are probing, then it's a lot easier.

im thinkin that if i use a test pen that could handle 240 v and connected the bulb with and LED that should do it? and the negative to a long wire and a crocodile clip. just want to know if it is possible.

It's possible, but as several people have said, a kluge like this connected to 240V is bound to
be dangerous. How many negative answers do you want? Use the kluge for non-lethal voltages,
at least.

Better make that a 2W resistor then, it would dissipate over 1 watt at 50V.

ash901226:
and the negative to a long wire and a crocodile clip. just want to know if it is possible.

Making something that automatically works at 240V AC and 12V DC is difficult, and possibly dangerous.

i guess , i should abandon the idea for testing 240VAC, How about if i only limit it to between 3.3 to 24? is it reasonable enough?

Yes, that's reasonable, all you need is a series resistor of around 1.2K (assuming the LED is rated at 20mA).

The Electronics Club has instructions for building a polarity and component tester here.