TMP36 Sensor outputs change when ATtiny is plugged in

Hi all, I hopefully have a very simple problem, but I have been hunting for weeks for a solution and don't seem to be making much headway.

It does not seem to make a difference which power supply I use. I used my bench supply, a 5V wall wart, and the 5V rail from the Arduino and all give the same result. It also doesn't seem to matter which code is running on the ATtiny. To that end, it ALSO doesn't matter if the output from the sensor is even hooked up to the analog input on the ATtiny. I have tried two different microcontrollers and three different temperature sensors as well.

I know I'm new to all of this so any help would be awesome!

You can also try connecting the 5v pin of the Arduino top the Aref pin.

I can program the ATtiny, remove the Arduino from the circuit, and power the ATtiny and temperature sensor from my bench supply, but I still have the same problem as before. The ATtiny doesn't have an Aref pin, does it?

The ATtiny doesn't have an Aref pin, does it?

My ATtiny84 has one, which one are you using?

ATtiny45. If there are different ones, this one is an 8-pin DIP that I can use on a breadboard. I still feel like this should be a simple solution though, I see tutorials everywhere with this same hardware and it seems like no one else has had this problem.

Does the supply voltage change when you you plug the ATtiny45 in?

I measure the +5V rail at 5.116 using a Fluke 115 multimeter. Again, as soon as I hook up the ATtiny the output of the TMP36 drops to about 0.1 V. I hooked my oscilloscope up to the output just for kicks and it looks pretty normal too. There's a slight bit of noise when I plug in the ATtiny but it's just an extremely small ripple, the TMP36 should have no trouble with this setup.

Also FYI the ATtiny is just running the "blink" program just so I know it's not doing anything weird. 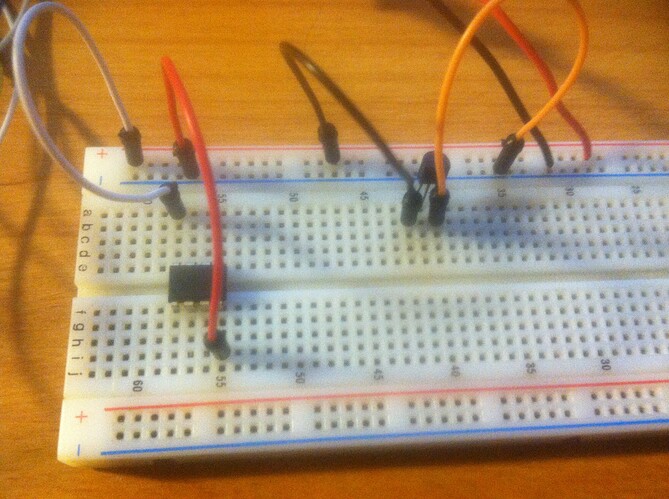 You don't have a decoupling capacitors, neither on the tiny nor on the TMP36. Try a 100nF directly at the chips and one 47µF on the power rails.

This seems to have fixed the problem! For something so simple it seems to be absent from a lot of the simpler tutorials (I'm no electronics expert). Perhaps it is because they are geared towards using a full-blown Arduino instead of the smaller ATtinies, and the Arduino does a better job of power regulation. Either way, I appreciate the help! If the problem crops back up I'll let everyone know.

Perhaps it is because they are geared towards using a full-blown Arduino instead of the smaller ATtinies, and the Arduino does a better job of power regulation.