To what extent do you judge suppliers based on layout?

When you get a board, assuming you have no complaints about it's functionality, to what degree to you judge them/the design based on their care with layout? I definitely judge VERY harshly on this (I made a new board rather than trying to hunt down the manufacturer of a board and try to buy 100 of their design because I didnt like how they laid it out. Sure enough, I later discovered several dreadful design decisions that demonstrated that yes indeed, this was his first rodeo, and his design was unfit for purpose. Not that the other design I am using in place while I wait on my boards IS fit for purpose; it sucks in other equally serious ways... but it's cheaper and readily available)

Basically, as a designer, the kind of things I did in my early designs when I didn;t know how to use Eagle. If I did that when I was inexperienced, what ELSE doesn't the designer know how to do? If their design is halfassed like I describbed above, I suddenly no longer trust him to do decoupling right, or do... a lot of other important stuff... right.

Also, as an aside, looking back at my old designs is cringey, like reading the term papers I turned in in highschool ("Good god, what kind of moron wrote that?! He has no clue how the world works, and his grammar is vile to boot! And another thing...(snip)... just awful, who the heck wrote something like this, make sure he never has any responsibility! And maybe remove some of his body parts so he can't repro... What, you say it's mine? Oh dear, I thought it looked familiar")

I've never hired a PCB designer and I doubt many other hobbyists have either... This is mostly a hobbyist forum... A good PCB designer is going to charge at least as much as a plumber and most of us don't have the budget to pay for several hours, or many hours, of design work.

Almost every company I've worked for has had an in-house PCB designer although they may have occasionally used a contractor.

In either case, the electronics engineer (and the rest of the design team) works closely with the PCB designer so there are no "surprises". And of course, they might hire the same contractor again if they have good experience with them.

I think maybe ONCE I've seen a "perfect" board on the 1st try. It usually takes "Rev 2" before a board goes into production, and there still may be some "cuts & jumps" so it's not unusual to make one more revision even if the 1st batch go into production requiring some rework.

Most contractors work by the hour* on a "best effort" contract so they get paid for any corrections or changes. They MAY fix something free if it was their fault, but they are not obligated and YOU will eat the cost of any scrapped boards. (In that way, it's not much different from having your own employee.... You can fire them but you still have to pay them for their hours worked.)

Oh, absolutely - I'm not talking about contract board designers (and I've done contract board design for careful people and ones who didn't know what I did and didn't care as long as it worked). I'm talking off-the-shelf parts that you buy, like those little modules that we all get (from $parkfun, Adafruit or the ebay/aliexpress clones of them), or commercial products that you crack open and examine the guts of - which is a great exercise for an embedded hardware designer by the way.

I dunno. I’m harsh, I guess (I look at some of the official arduino boards and sigh deeply), but some of the things on your list don’t bother me (45 degree angles? I like curves!), and I’m more bothered by some things you didn’t mention (traces and vias that are smaller or closer together than they need to be, for example.)

The eagle auto router is bad enough that you can tell when someone has just used it and not cleaned up, and that usually bothers me quite a bit.

I guess one of my pet hates is layouts where the components appear to have been placed in some inexplicable random pattern and then it's left to the auto-router to solve the problem.

I find it a lot easier to debug a board if, for example, there's a bunch of discrete components (Rs, Cs etc) grouped together on the board that share a common ground (or supply) and the designer has taken the time to orientate the components so that the same side is the common.

But my real pet hate is silkscreen component IDs (R1, R2 etc) which are left at the default orientation instead of all being orientated the same way.

westfw:
I dunno. I’m harsh, I guess (I look at some of the official arduino boards and sigh deeply), but some of the things on your list don’t bother me (45 degree angles? I like curves!), and I’m more bothered by some things you didn’t mention (traces and vias that are smaller or closer together than they need to be, for example.)

The eagle auto router is bad enough that you can tell when someone has just used it and not cleaned up, and that usually bothers me quite a bit.

I would count traces and vias oddly close together in the weird routing category.

And yeah, certainly you can tell when someone just threw it at an autorouter. Only thing worse than that is a hand routed board by someone who clearly can't route for crap.

And - my criteria above exclude the official boards, I specified that the boards are functionally satisfactory. The Uno has a problem (which AFAIK has never been fully understood, but is clearly linked to the power switching circuit) that blows out the 16u2 under some circumstances, and despite having acres of board space on the official boards, they make no attempt to give the voltage regulator a copper pour to sink heat into, they have a resonator instead of a crystal, despite charging a kings ransom for the boards....

I have been designing boards for years and fortunately I use Altium. Its autorouter is pretty good but I still spend ages fixing things up. Most of the things you listed are my pet hates too. Its not hard to have tracks coming out of vias at a multiple of 45 degrees. Small tracks that turn at 45 and then another 45 almost on top of it. It looks cheap.

One thing I do spend alot of time on is moving components so I can avoid vias. I have spent way too many hours repairing dead boards because of failed vias, the less the better.

I used to repair multilayer PCBs. Sooooooo much fun engraving down to internal layers to repair a burnt track. Might sound stupid but when the board is worth $25K its a small price to pay to get it working. 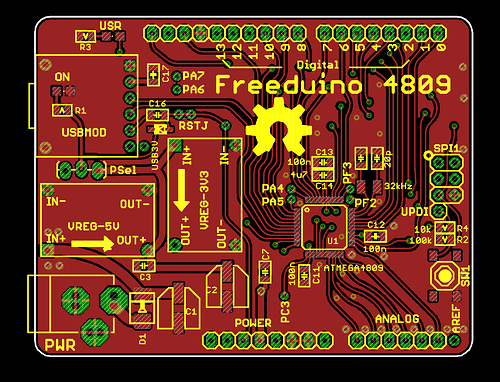 windoze_killa:
Small tracks that turn at 45 and then another 45 almost on top of it. It looks cheap.

But radiates less microwaves than a 90 degree bend - the high frequency design rules may be
the reason for this feature.

I tend to think Maxwell while laying out and obsess on lowering inductance and ensuring ground-return
paths (for 2-layer). I'll put decouplers on the underside if necessary even though is annoying to have
to build with components both sides

I see a lot of DFA fails (design for assembly). The techniques for hand assembly are different than machine, even for through hole, where the CAD often fails to make thermal breaks and pads large enough to make hand soldering easy. The default rules assume wave solder. For SMD it's even worse. I had a designer lay out a board for me, I asked for thermal breaks and got a nod, but in the end there were several places where it took a 30 watt iron to place something like an 0402 part because there was extensive copper to the ground plane. It's not an issue in a reflow oven because everything gets hot at once. But even then, for a hobby board there is rework to consider. The default CAD rules are really for machine production.

Oh, here's another one. Hey thanks for the nice mounting holes. Too bad there is absolutely no clearance for a real world standoff or screw.

aarg:
Oh, here's another one. Hey thanks for the nice mounting holes. Too bad there is absolutely no clearance for a real world standoff or screw.

Don't you just love that. It is one of the first things I place on a board. I make sure the pad is large enough to take a nut and washer AND to get a tool in to tighten it.