I am grapling with a design of the common emitter biased transistor amplifier. Just want to go beyound Arduino and learn a proper, analog stuff.

Anyway, the circit I made suffers from clipping, no matter what I do. And I want to get a nice sinusoid from top to bottom. So I thought of getting one of these devices that can graph transistors' curves. Unfortunately, although device was brilliant at what it did, it was only designed for very low currents, maybe 50mA max. And my circuit works all the way up to 500mA, so it is out of the range of this device. 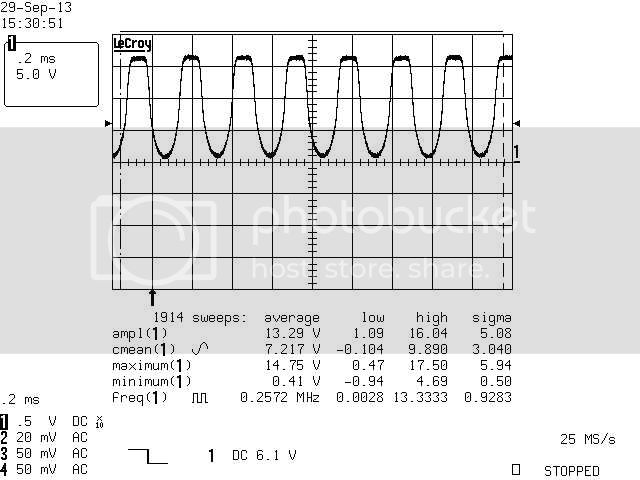 Now, as far as I can get it, for transistor graphing device I need some form of resistance that I can vary digitally, for example via commands sent from Arduino. Unfortunatelly, all the digital pots I can find can only handle less than 10mA, if that. Practically there is no digitally controlled component that can stand currents in full range from 10-1,000mA.

As a last resort I thought connecting servo mottor to the pot, but definitelly that would be an overkill.

This circuit is a programmable current source in which op amp LT1102 (Linear Technology Corp.) is used in conjunction with LT1006 op amp. A1, biased by Vin, drives current through R (10Ω) and the load. A2 senses this current and controls A1. The...

;-))) programmable resitor. I am such a rookie. Thanks.

By the way, does anybody know any comercial transistor curve tracer that can work in 10-1,000mA and is bellow $200?

By the way, does anybody know any comercial transistor curve tracer that can work in 10-1,000mA and is bellow $200?

Yeah, the one you are going to build.

You don't really need that. Can you show us the schematic? There are a lot of things to take into account. It is not really possible to get true symmetrical clipping with a single transistor Class A amplfier. You might consider a Class AB push-pull amplifier.

Heathkit used to have one about 30 years ago...

Both low current, but it gives you a place to start.

I have this one:

but it is puny little thing, only goes to 10mA. For an ordinary BC548 transistor, that is about 1/10th of its capacity. It has brilliant software, though.

In any case, this will be of limited utility for the purpose. I'd very much like to see a schematic.

Here is the circuit. Pure marvel of technology 8)

Values on the picture are wrong. Real values are these:

Why are there values expressed as fractions?

Could you just get out a pencil and paper, and draw a schematic with the correct values written by the components?

I think you are chasing a unicorn, trying to get symmetrical clipping in a single transistor Class A amplfier.

polymorph:
Why are there values expressed as fractions?

I think you are chasing a unicorn, trying to get symmetrical clipping in a single transistor Class A amplfier.

Sorry about fractions. I removed them. That was just error. Please have a look again.

Are you saying that single transistor Class A amplifier will always clip on one side? That means essentially my design work "normaly" for what it is.

Strange thing is that I had these same values on a breadboard and it worked without clipping. Only when I transfered the design onto perfboard it started clipping.

So, roughly 100mA bias point (about 2V on the base, about 1.4V at RE). Across a 167 ohm collector resistor is 16.7V. However, that is 2V fed through a thevenin resistance of about 1k, and so the additional drop due to base current depends on the transistor beta. A rule of thumb is that the base bias network should have about 1/10th of the collector current flowing through it.

Or am I getting the right values? If you want help, it is better to not make things difficult for those trying to help you. Could you repost a schematic with the correct values on the schematic?

If you want better linearity, use a Class AB Push Pull amplifier with negative feedback.

I would also like to say that I hope you do not find anything I say to be discouraging. I applaud you for learning more about electronics. So many stop with plugging in shields.

Hi, I uploaded a new image with clear values.

Yeah, learning the analogue side was like jumping on hyper-drive. My ability to create new applications jumped into hyperspace. It is much more scalable than digital and although you can 'fake' things digitally, they'll always flimsy, depending just on a single byte before they crash. With analogue you have a feature built into the core of the system and than you just polish it with digital. Not the other way around.

Only problem with analogue is that one can forget about doing it intuitively. One really needs to learn maths behind it.

I don't understand strange symbol in top right of the picture. It shows +-10V Gnd, but there are no +/-10V rails in the rest of the circuit. Does this circuit require positive and negative voltage power supply?

It depends on the op-amps, I am sure that these, like most, require a split supply*. I don't know what you mean by "top right" but the input at the top left is stated to be +/- 10 V meaning that the circuit can sink and source current.

A positive rail only supply would only be able to source current.

MarkT:
Here's a circuit than sources current (a bit harder than a programmable sink)
http://www.seekic.com/circuit_diagram/Power_Supply_Circuit/VOLTAGE_PROGRAMMABLE_CURRENT_SOURCE.html

I don't understand strange symbol in top right of the picture. It shows +-10V Gnd, but there are no +/-10V rails in the rest of the circuit. Does this circuit require positive and negative voltage power supply?

There's a voltage source representing the input at the top left, perhaps that what you mean? The load
is represented by a programmed (dependent) current source symbol bottom right. No supplies are shown
in the circuit, they are implicit (normally the case for signal processing schematics, supplies are boring
detail).
(for instance look at the datasheets for the amplifiers referred to)

thanks, you are right, it was "top left".

Yeah, nice and simple circuit, but I do not have power supply with -10V.

Additionally, even if I had supply with -10V, can I damage oscilloscope? Where is my ground?

If you only want to source current with it, then you would only be supplying a 0 to +10V signal to it, and could then use just a +15V power supply. But it will limit how linear it is down at very low voltages at the output, and at low currents.

When only sourcing current, as you'd need for a transistor curve tracer that only does NPN or N-Channel MOSFET, you could use a lower voltage, low current supply for the - supply. It could be generated with a charge pump, or a small switching regulator like the MC34063 can be wired up to generate a regulated - voltage.

If you are getting into analog, you should have a variable power supply with tracking or separately adjustable + and - outputs. 15V is about the max you'll probably need.