So I want to control the opening and closing of my dust collection blast gates in my woodshop (about 12 total) using current sensing switches to talk to an arduino which would use a program I am beginning to think through to open and close the gates as needed. I am new to this whole platform so initially I am looking for advice about the hardware side of things and getting this started.

I am picturing a current sensor switch which is activated by the local machine being turned on and would send a signal to the arduino which would then send a signal to one leg of a multiple channel relay which would supply power to a solenoid switch would would activate a dual acting pneumatic cylinder which open and close the correct blast gate. I gain some advantage by having the arduino in the system in that in can constantly look to make sure that at least one blast gate is always open and that a time delay after a machine is turned off can be added to keep that gate open and then open the one "default open" gate prior to closing the one that got activated. I am as interested in having the gates open at the correct time as I am in having them close when not needed. The activity of opening and closing blast gates on my system manually is not effective because most of time I do not take the time to walk around and open or close gates as I should when working throughout the shop. The new setup would automate all opening and closing so I would not have to think about it and would always provide me with the maximum vacuum/ air flow on the dust collection system.

Hopefully that explains my goal...

So, first, do I have the correct understanding of all of the components or am I missing something in that chain?

Then, can anyone help direct me to any resources that might make this process a little more efficient and still allow me to work through the process of learning how it all works?

A bit expensive though.

Yeah I saw those when looking to into solving this problem but they are not available in larger then 4" (that I could find and most of my gates are 5" and a couple 6" so they won't work. Thanks for the reply.

I don't want to trigger the DC on and off with this system. Only the blast gates. If anyone can even direct me to some tutorials of things that are like this that would be appreciated.

I am sure you seen this: 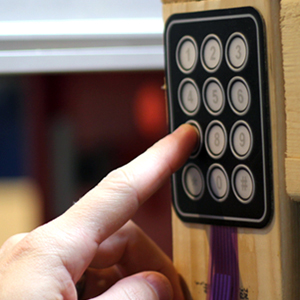 Yep. I am kind of shooting for a system more like this person though I don't think he is using a micro-controller.

I know you bought an off the shelf system.

Did you progress your home made design at all?

I ask because I have working on the same idea for some time and the problem I can't solve with code id the sine wave produced by AC sampling via a current transformer as when the power is on.
It swings from the top + reading through zero on the way to the lowest - reading.
This means I can't just say zero is off and anything other than zero is on.

Studio 18, what readings are you getting from CT?