Hi. I am having an issue with a TIP142-based H-bridge circuit which I need to switch 48V@5A through.

The TIP142s have their base connected to the Arduino via 2k2 resistors and the collectors and emmitters connected directly to the 48V, Load, and GND as one would expect. The switching itself works fine with the voltage swinging between positive, zero and negative as the arduino drives the H-bridge between forward-off-backward-off in a loop.

The issue is that only 4.79 volts (positive or negative) are being passed (measured no-load) irrespective of the rail voltage (tested at 10VDC and 19VDC)).

I am no doubt missing some important step, possibly some sort of biasing on the transistors? Or should I use a different spec darlington pair? (142s are way over the voltage requrements but were just what I had at hand, would using a 140 actually make any difference?).

The two top transistors are used as emitter followers.
That means that the emitters are always ~1.5volt lower than the base (Arduino pin).
The motor will never see anything more than 5volt-1.5volt= 3.5volt.

I doubt you can ever make a 48volt/5Amp (250watt) H-bridge with these darlingtons.
Even if you do it right (with level shifters), the losses will be too high (lots of heat, big heatsinks).

Can't find a suitable module but found an integrated circuit that is (barely) within range.

A new post? Why not tell us which chip and we'll tell you if its feasible first.

The problem is that the top transistors are NPN and should be PNP.

Let's just say the motor is at 50 volts for the illustration.
T2 is happy because Vce is 50 volts and Vbe is 5 volts from the arduino.

T1 is unhappy. Vce is still 50 volts but Vbe is .... -45 volts. That is always off. Actually could damage the TIP transistor. :o
You need Vce to be about 5 volts to turn on the transistor. For the top transistors this is like 55 volts but motors are noisy and again you could damage a TIP this way. The TIP142 is NPN, so get a couple of TIP147 PNPs to match. Also learn how PNP transistors work in an H-Bridge. Wired kind of the same but logic is different. 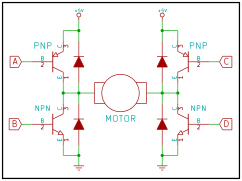 And the best doc on electronics for the nerd I've ever seen, but a bit dense. Take your time with this one:
http://lcamtuf.coredump.cx/electronics/
Good luck, and don't forget your fuses when working with such voltages.

Yes, another good point, transistors typically have a ~5V max reverse voltage on the BE junction, exceed that
and they just die.