Trying to find out what a part from a video is

I'm not sure if this is the best place to post this question, but would anyone have any idea what the blue device above the paper being dispensed is on the left side of this video at 28/29 seconds? It's only visible for about a second. And from what I can tell, the paper is moved by something other than gravity based on its speed.

Here's another view of it. 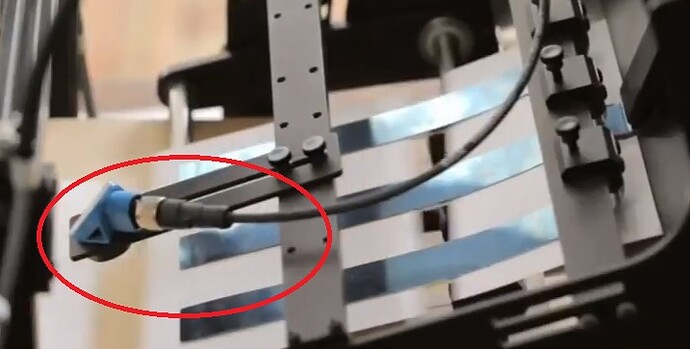 I'll bet you are right Tom. I recognized the oval cap as a LED holder from another product (a small item 3D scanner.) The substantial connector (might it be a fiberoptic cable) means there is data being transferred. The position relative to the paper in the second photo strongly implies that it is looking at the paper.

It seems to be operating at a very long range compared to the usual sort of optical detector.

If (and I have no idea) that is a fibreoptic cable maybe an image is being transmitted to another sensor (camera?) somewhere else? What sort of processing might take place inside that sensor housing that would produce the sort of data that would require an optical cable to carry it?