i'm on an IOT project, and would like to connect one digital pin from Arduino DUE to another 3.3v microcontroller digital pin. I know if both were correctly configured as Digital Output and Digital Input nothing wrong can happen, but i want to make a hardware system to allow both digital output configured, and one of them at LOW lvl and the another one on HIGH and protect them to malfunction, causing damage in one of them.

Yes, i know it looks weird but i want to make sure if someone comes to the project externally and doesnt know how it works, nothing wrong can happens if it occurs. Between both microcontrollers exists a 8:1 MUX that allows select the digital pin to be connected (Scheme below). Don't know if a Schottky Diode will work or something like that, but i readed that they can't support continuous reverse voltage.

It would be awesome if someone can give me some clues to do that ^^-. 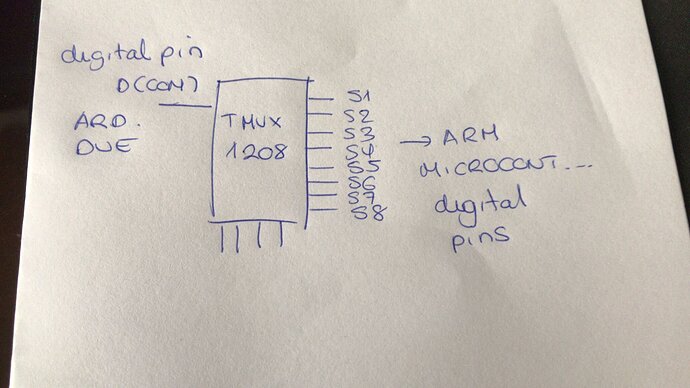 Hi,
If I understand you correctly, place a 1K resistor between the input and the output, so if both were configured as outputs and one was HIGH and the other LOW then a limited current would flow.

With one as input and the other output, the input being high impedance would need little to no current and the volt drop across the 1K would be negligible.

Rugged Circuits designed the Ruggeduino some time ago, and detailed the rational behind all the protection circuits they put in it. You can use that article as a guide to figure out which kind of protections you want to use.