I am looking to design something similar to Garmin's HUD for cars and am having a hard time finding suitable displays. 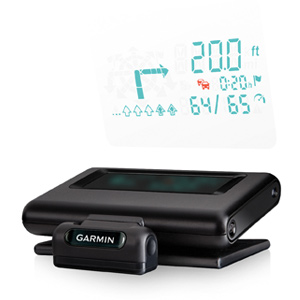 The display must be bright even in full daylight operation, which is why Garmin used a VFD display in their product that produces about 7,500 nits.

I cannot seem to find anything on the market either LCD, LED, or VFD that would produce such a bright image.

About the closest thing I could find to what I am looking for is Adafruit's 128x64 graphic VFD display. It's an ideal size, but unfortunately is still not bright enough.

Another option I considered was dismantling an LCD display and adding my own powerful backlight, exactly as is done in the following tutorial: Projection Clock

It seems that most LCD displays compatible with Arduino are sold on shields which would prevent me from doing something similar.

The last option I considered was buying a pico projector, but it is more costly and would require HDMI/VGA interfacing with an Arduino.

Would anyone have other suggestions for a powerful display?

From pictures of the Garmin device it appears to be reflecting the image off a plastic plate. I expect that plate is partially reflective and may even be tuned to the particular wavelength of the display. The same can probably be done with a green LED backlight.

Here is a video of a $50 HUD from China: https://www.youtube.com/watch?v=EQmd-3dBRXo I think it uses LEDs.

Excellent! I had been looking at some Nirtake VFD products but couldn't find anything to show its true brightness.

Military HUDs have a phosphorescent coating on the beam splitter but for my application something just like in that video would work great.