I have designed a PCB based on Arduino MEGA 2560 and RAMPS, with some differents:

Recently I had a problem in my machine where the USB heats up and is burnt and the computer crashes, when it has been connected to the PCB and the 24V power supply turns on.

After this problem, I made the next analysis:

I have reviewed the machine design, but at first it not seems something is causing this problem.

I keep waiting some help of you, I really appreciate it.

Without the real schematics it's hard to say.

You can start by testing is the current flow is over the 5V of the USB or the GND. If it's GND then you might have a ground loop. Or a disconnected GND loop is for example the 24V power supply is also earth referenced and the GND wire between the board and the 24V power supply is missing. Then it tries to sink all the current of the 24V supply through the USB to mains earth to the GND of the 24V supply...

It's not clear if you are using the standard ramps setup or not.

Here is the reference: wiki/RAMPS_1.4

When using a 24V supply, there are some gotchas... one being that you need to remove the diode on the Ramps board that feeds the (normally) 12V supply from the power brick to the mega board from the Ramps board. Sending 24Volts to the mega that way is problematic.

Here is how mine is wired. 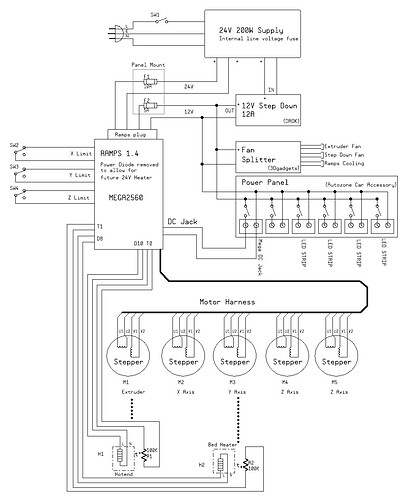 I added a 12V stepdown regulator ($8 from amazon) so the Mega and my motors gets 12V still but my heated bed gets 24V.

Please explain better how you have yours setup.

a lot of thanks for your very quick reply. To clarify, my PCB is as an all-in-one Arduino Mega 2560 and RAMPS, but with the components carefully selected for working at 24V. I think my problem is not at component level, but at design level.

I continue searching the answer 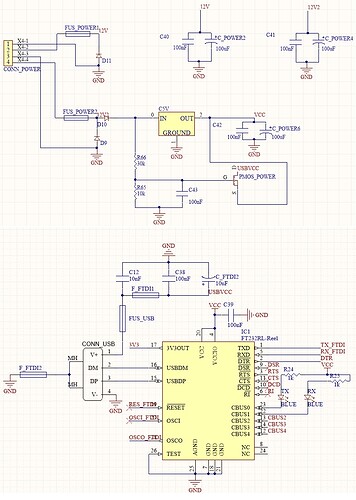 Quick look at the schematic:

I always get the shivers when people don't draw ground down / pointed down. Makes it harder to read.

It's plain annoying the symbol for a ferrite bead is the same as a fuse :S

You talk about a PNP, all I see is a MOSFET. And it almost looks like a N-channel...

And then the resistors to switch it. I don't think that's strict enough. And even if it is (and we don't know because my crystal ball does not reveal which transistor you used) it still leaves 3V at the gate when 12V is applied....

I always get the shivers when people don't draw ground down / pointed down. Makes it harder to read.

You are not alone.

Sorry, but your drawing did not serve well to enlighten me. I only saw 12V... and I did not see the full system integration...

Also... why am I seeing an FTDI device?

There is nothing that needs to be carefully selected for 24 volts on the RAMPS board. There are no Mega's that I know of that enjoy having 24 volts fed to them unless you found a way to add a heatsink to the 5V regulator.

I asked if you removed D1 from the ramps board.

From the ramps documentation:

D1 should only be installed if the 5A rail is powered by 12V. It can be omitted and the Arduino will be powered from USB. You will want D1 installed if you add components to print without a PC. To reiterate, D1 MUST be omitted if you are powering the 5A rail by more than 12V, or the power is not absolutely clean, otherwise you may damage your ramps.

So by carefully selected, I assume you mean that you removed D1 on the Ramps board if you are supplying BOTH rails with 24V.

I have to ask apologies about the notation error of the schematic:

Considering 24V, the voltage in the gate is 6V, therefore:

Regarding to the FTDI device, it is used for the communication between the computer and the microcontroller.

Thank you very much for your answers. I think we are near from the correct answer.

Maybe the problem is with the PSU and computer grounds? I think maybe there is a voltage potential between both grounds and it generates a high current through the USB cable. However, I have measured the voltage potential and it seems zero. I have to say, this problem is not happening in Spain, but in other prototypes sent to Portugal and Scotland, where just connect the USB and power source, the cable has been burnt and the computer crashes.

Mm, yeay, the MOSFET thing is the same in the Uno only that drives it via a comperator. Bit weird but should work I'll say. But not in the way you said. The voltage on the drain controls nothing... It the Vgs that controls the mosfet. But it still needs to be a logic mosfet so which did you use?

Biggest thing is, the fuse in the USB line is still fine. So that kind of clears the USB 5V line. So that leaves the GND line and that brings me to grounding loops again. And like I said, if the V- of the power supply is connected to mains earth but has no good connection to the board all the current is going through the USB GND.

So how do you test it? Do you use a desktop or a laptop? And are the desktop en power supplies grounded?

And I think we need the whole schematic with part numbers and correct voltages etc. And the kind of power supply you use. Btw, why do you have two 24V power supplies?

However, I did a test where I connect the USB and only the 24V terminals from power source (not the neutral), and the current does not flow from power source, and nothing strange happens. And viceversa. That suggests to me that if there is a bad connection of the power source, at first it should not create high currents which destroy components.

For testing it, I have used a laptop, both with and without AC connection. The power supply is a chinese PSU 24v 360W 20€. The two terminals are in a system similar to 3D printers, where one of them works with the motor and the other with heaters.

Hi,
Have you tried running with the computer and your machine from the same outlet, that is the same earth.
Have you checked your earth and power outlets?

ajmoreno:
For testing it, I have used a laptop,

Yes, I think that make sense. So summerizing, probably my problem resides that grounds from computer and from power source are different. This is a very good result, because it explains mostly my problem. Thank you guys.

However, in order to solve this issue, I need to understand where it comes from, and then modify my design to avoid that the problem will be repeated again.

Analyzing my circuit from this perspective, I had:

My questions are then:

Again thank you very much.

Let's start with saying I don't see a fault as long as everything is connected correct. There is a hard connection between GND of the circuit and the V- of the supply so the route via the USB cable should be higher impedance for the 24V. And one thing we didn't consider, PCB layout. If the PCB track from motor out to power supply terminal is crap you have problems as well.

ajmoreno:
However, in order to solve this issue, I need to understand where it comes from, and then modify my design to avoid that the problem will be repeated again.

Agreed. But without all the info we still can't really help you. So full schematic, PCB layout, part number (also from the PSU) etc.

ajmoreno:
I have opened the power source and I have seen that the ground is connected, through capacitors, to the 0VDC outputs

You mean mains earth (confusing to call that ground in this case) is only connected via capacitors to the V- terminals?

ajmoreno:
and to the two outputs of a transformer which inputs are line and neutral (I think this is used to reduce voltage from 230V in the input).

Is it a real "old school" transforer or a switch mode? (Aka, type number...)

ajmoreno:
Also ground is connected to the chasis of the power source.

I may hope it is

That's the least they can do with PE, shield the device. But sure the V- terminals aren't also connected to the chassis? Have seen that before...

The PC ground is also hard connected to the 0V wire. And in desktops (and some but not all laptops) GND as a hard connection to PE.

I have arrived to this conclusion too (although I have no proofs because here the system works correctly). My theory is that the connection with the ferrite between my 0V and USB (computer) earth is creating a difference of voltage between both earths (power supply and computer), which should be at same potential. Therefore, 0V in the computer is different from PCB and that causes a high load of current through the computer, USB cable burns and computer crashes.

Are it indeed 3 separate outputs of are all V- and V+ terminals grouped together?

You mean mains earth (confusing to call that ground in this case) is only connected via capacitors to the V- terminals?

Yes, concretely I think ceramics capacitors of nF. What do you suggest is the best way to communicate signals line (in my case, V-) and earth?

I have found an interesting discussion in this thread about how earthing the USB shield, with a lot of possibilities but none of them the best: http://forum.allaboutcircuits.com/threads/usb-device-cable-shield-connection-grounding-it-or-not.58811/

Is it a real "old school" transforer or a switch mode? (Aka, type number...)

Yes, in the output of an "old school transformer".

I may hope it is

That's the least they can do with PE, shield the device. But sure the V- terminals aren't also connected to the chassis? Have seen that before...

I really appreciate your help, specially to septillion.