Why in the next arduino hardware, you dont change the USB type B conector for the mini one?: http://www.sparkfun.com/commerce/product_info.php?products_id=587 To save space, and the wires use to be more slim (easy to manipulate), and we can use any USB recharger, like blackberry, to plug in, etc. Please!!!! ;)

The connector in your link is the B end, however the Arduino uses the A end. But if you are suggesting using the USB micro A connector, I would disagree. I think the standard A connector chosen by the Arduino designers is a good choice because cables for connecting into computers are widely available and robust (I don't know about the cost, but would guess that its less then the micro A connector).

If you want to power your Arduino from a power source with a USB micro connector, perhaps you can make up an adapter using a sparkfun connector wired to a spare USB lead that can plug into your board.

I think jordi's suggestion is a good one, mem I think you are misinterpereting jordi - he is suggesting replacing the standard B receptacle which is on the Arduino board with a miniB type. The end that plugs into the computer would still be an A type. The linked connector is a miniB. 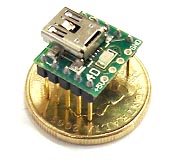 Unfortunately, mini USB connectors are not standard. I must have at least four different types lying around and it's a real PITA to find the right one each time. And most/all of these don't carry power, only the serial comms, so you 'd have to power the Arduino from batteries or another power source, not from USB power.

So, to me at least, it seems like a bad idea. If you really want a smaller connector, why not use the FTDI serial to USB cable?

Mini USB is in fact a standard and every device I have, can use the same cable and power is provided over this cable just like a full size USB. Maybe you are getting confused by the new micro USB that is starting to show up?

Unfortunately, in addition to the standards (remember, "the nice thing about standards is there are so many of them!") there are many proprietary connectors as well. I think the iPod shuffle as well as some other devices use a 1/8" stereo connector for USB.

The B connector on the Arduino is easy to work with, cables are cheap, and seems to be a bit more likely to stay plugged in than the smaller varieties.

The mini connector would save little in terms of board real-estate - it would save mostly height, and that's not really a bonus as the sockets are pretty tall.

As for a power source, there are cheap (less than US$5) "travel adapter" devices that work both on AC and on 12V auto power that have a USB A port. Yeah, I know, it doesn't help you if you already have a cell phone cable with a mini-B.

I would be more likely to remove the B connector and hard-wire a USB cable on; one of the things I hate about USB is the friction-fit connector. I want a connector that locks!

The newer through-hole "freedino" kits have a "dual-layout" that includes a mini-B USB connector option for the SAMTEC mini-B SMT connector. (http://www.nkcelectronics.com/freeduino-arduino-diecimila-compatible-board-complete-kit.html) This is the "rounded corner" version of the board that added about 6mm on the left edge (the board now extends to pretty much the ends of the connectors) to accommadate that connector and some other stuff. While in theory the connector-side of the mini-b connector is standardized (though there are TWO mini-B standard connectors!), there seems to be much less standardization of the PCB layout for the mini-b connectors. I'm not sure that it's all that worthwhile (even though I put it on there!); like others have said, the large B connector is more common and more compatible with commodity cables.

Mini USB is in fact a standard and every device I have, can use the same cable and power is provided over this cable just like a full size USB. Maybe you are getting confused by the new micro USB that is starting to show up?

Nope, the ones I have all pretend to be mini USB. One's from a recent Chinese MP3 player, one from an Epson camera from a number of years ago, one from a recent no-brand GPS and the last one from a no-brand portable harddisk. None of those carry power and they are not interchangeable. They simply don't fit. It's a hassle cause they look exactly the same.

So, mini USB might be a standard, it seems not to many manufacturers are following the standard...

And I'm sure replacement cables will be very hard to find if I ever lose one of these. The same story seems to apply to mini firewire (IEEE1394) cables, BTW.

Here is the mechanical drawing if one what to measure it out:

Here is the mechanical drawing if one what to measure it out:

So all of the USB has +5V power coming out.

Yes i talking about mini-b (no micro-b), and almost all the digital cameras use it, my Sony PSP use it, My blackberry use it, the mobile of my girlfriend, mom, dad use it, mi USB hub use it, my portable hard drive use it. The mini b is for small devices like arduino, the normal B is only for big devices, like external hard drives and thats all i have with normal B in my house. For me is 200% better. Almost everything is mini-b. :P

This is what im talking about: http://www.chip45.com/index.pl?page=Crumb168-USB⟨=en

Now imaging it with dip version of atmega168 and the power supply... :)

Not that I think most people need the size constraints for the prototyping phase, but still, awesome.

This would definitely be a bonus, if only because I always have 1000 mini-USB cables lying around but never any standard ones!

Atmel, the manufacturer of the AVR microcontrollers, is still using the full sized USB B connectors in their new development boards (STK600, Dragon, etc). Other MCU manufacturers are starting to use the mini-USB connectors, but the most important factor is the size or height of the board. If you are targeting mini boards (power from USB, no DC jack, no headers, no ISP/EXT-USB headers), then use the mini-USB. If you use one component which height is as high as the full sized USB-B, then you can use any of them without any advantages/disadvantages.

Ditto me; I'd prefer mini-USB. The current Arduino USB-B cable is what I think of as a "printer" connector. My printer uses it, and that's it.

I've found mini-USB to be nicely standard. Works for my camera (Nikon D70), several off-brand MP3 players, Symbol barcode scanner, Canon flat scanner, bluetooth headset (including power for charging), etc. It's so standard that I have two cables hanging off my desk at all times waiting to be connected. Also seems more "appropriate" for the Arduino somehow.

(Nikon used to use a similar but not the same cable that you had to buy for $30 from them.)

I also don't see the point in micro-usb. mini-usb is plenty small enough.

Then again, I'm about to the point where I'm getting over needing the USB to be on-board, and am going to move to FTDI the next time I buy a board.