Using a camera to guide an RC car from a computer.

I am working on a project to build an RC car. We plan to build the car with a camera attached to it. We want to have the camera send a live video feed to a computer (either wireless or wired). The video feed would be uploaded to the internet onto a website. We would then log onto the site and control/steer the car via the website and the live feed. The arduino would take the commands from the website and control the steering/acceleration of the car. I would like to know if this project is feasible, and if so, what would be the smartest way of going about this.

Divide the project in small steps and try to conquer them one by one. biggest concern is the batteries imho, how to provide enough energy for all parts.

robtillaart: Divide the project in small steps and try to conquer them one by one. biggest concern is the batteries imho, how to provide enough energy for all parts.

Thanks a lot. Yes we plan to divide this into parts. There is a group of 4 working on this, so we plan to divide each area up and tackle it in parts rather than as a whole. I think my biggest concern is the camera. Do you know of a good wifi webcam that would work for this?

Machenator: Thanks a lot. Yes we plan to divide this into parts. There is a group of 4 working on this, so we plan to divide each area up and tackle it in parts rather than as a whole. I think my biggest concern is the camera. Do you know of a good wifi webcam that would work for this?

Remember that everything you add to the car will likely need power of some kind; the more batteries and weight you add, the less your run-time for a given amount of battery (you can easily get into a vicious cycle here). So you need to know what you absolutely need on the car, and what can be external to the car.

If the goal is -only- remote driving of the car, then you don't need an Arduino or wifi camera on the car at all: Instead, all you need is the R/C receiver (an off-the-shelf hobby-grade R/C system is easiest to work with), and some kind of wireless camera (900 MHz or 2.4 GHz being common). Adding such to the car will result in minimal weight addition, and the camera can likely be powered from the car's battery system. Your Arduino would be connected to the computer (which would also likely serve up the web page), and would control the transmitter of the car. The RF receiver for the camera would be connected to a video capture system of some sort, the output of which would be integrated by the PC using software with the web page output.

If, however, you intend to collect data from the car as it is run, then the complexity would increase. I would still stick with hobby R/C parts for the car (ie, servos for steering, ESC for the drive motor), and I would probably also stick with the use of a wireless camera (and not a wifi ethernet IP camera); however, you would use an on-board Arduino to control the servos/ESC, and to gather data from your sensors. Then, using XBee or some other RF wireless connection, you could then communicate with the PC (or another Arduino connected to the PC) to send and receive the data and commands, etc. The camera would work the same as the simpler system above.

The reason to avoid wifi on-board the vehicle is mainly to avoid the power requirements - unless it is absolutely needed (for instance if you need the range or other reasons); if so, there do exist wifi modules for the Arduino, and there are many possibilities for the camera and wifi. Do whatever you can to remove/pare-down any excess weight from the devices (remove any extra casing components, etc that won't effect the operation of the camera and such). You may need a larger vehicle platform to compensate for the extra power needed (it all depends on what you expect for run-time as well). The more you can off-load from the car, the better your run-time will be in general.

The biggest problem is that most R/C cars drive MUCH too fast for general robotics or this form of control, so it helps to find a somewhat slow car.

Do you know of a good wifi webcam that would work for this?

recently I bought a dericam wifi webcam with zoom and IR leds - http://arduino.cc/forum/index.php?topic=90432.0 - not cheap but not expensive either given its features (imho)

Do you know of a good wifi webcam that would work for this?

One thing to consider is how long the transmission range needs to be. Might be best to maybe get a camera and see what range you can get before getting too far into the rest of the system.

We want to have the camera send a live video feed to a computer (either wireless or wired).

If it is a wired setup with a computer, then the setup is fairly simple like the below web cam (cam has a bad wire sometimes). Bottom is a possible simple routerbot idea that could support having an IP cam on it.

Hi, Just to add my few cents worth -

If you can stretch to lipo batteries and a charger for them, you will get all the power you need, they are also much lighter than older nimh or nicad batteries.

For lower speeds, its common to fit lathe or crawler motors to cars, these provide low speeds, very smooth control, longer run times and sufficient torque to move around whatever equipment you load the car up with - my crawler can push my four year faster than I can walk in his go kart. 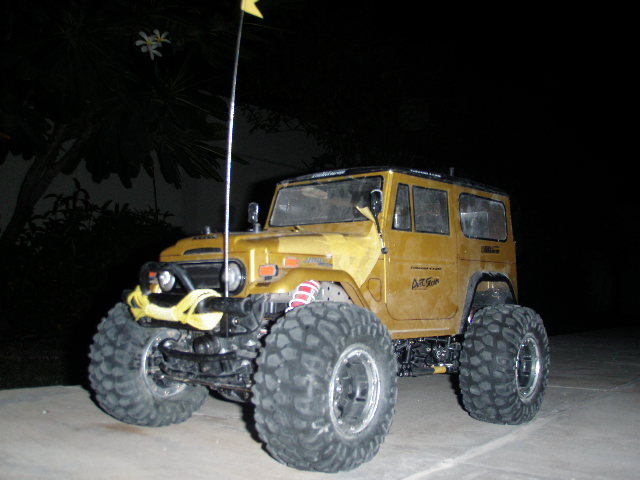 As previously mentioned you should get a hobby grade radio, this will give you proportional control for smooth and accurate movement, my low end system has a range of over 100 meters, thats as far as I can still see and usefully control the car, more expensive systems will give much greater range, my eyes won't !

Well, the range doesn't need to be more than 10-15 meters, because this is a class project it will only be run in the classroom. Also, the run time doesn't need to be much longer than 10 minutes, if even. We already bought a wifi webcam. Do you think there will be a latency problem over the internet that will make controlling the car via the webcam impossible to drive?

Do you think there will be a latency problem over the internet that will make controlling the car via the webcam impossible to drive?

If you have the cam, you should be able to figure that out. Have somebody walk around with the cam or tape it to a standard rc toy and observe the video.

Do you think there will be a latency problem over the internet that will make controlling the car via the webcam impossible to drive?

Latency probably will be a problem in terms of how responsive the car is to "driver-control" messages sent over the wifi link. I forget his last name right now, but George somebodyorother [Japanese last name, ???] wrote an article in Robot magazine 4 or 5 years ago about building a robot tank with a webcam. As I recall, he mentioned the wifi link was not responsive enough to actually drive the tank. It will be worse if the signals actually have to go through the internet itself.

For a local link, one possibility might be to use XBee to do the driving and the webcam to see where you're going.

Another possibility would have been to use a 2.4GHZ or 1.2GHZ RF camera that transmits to its own receiver, with display on an AV monitor, for doing the seeing, but you already have the webcam.