Using a car battery to run Arduino for about six thousand years, need to design

Replacing flooded cell lead acid batteries has become an annoyance at my house so I've been looking into a float charger that doesn't let the battery discharge or boil the water out over time. These things get expensive when you have a number of batteries that need it. So, I grabbed a (few) float chargers from Harbor Freight, took them apart, and reverse engineered them. Here's the schematic I came up with: 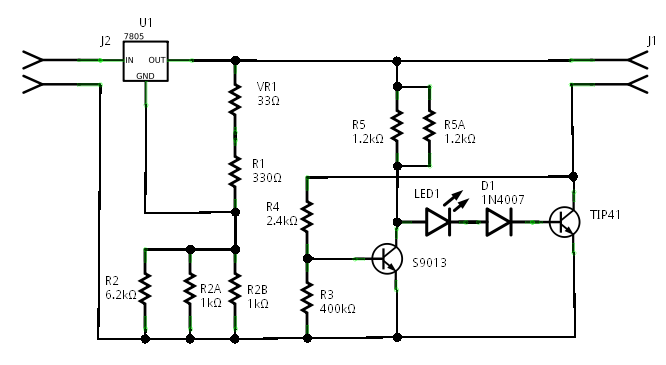 I found that they ship out set to around 14.1 volts and I thought that was too much so I modified them to look like this:

But in testing I found that I had to set the voltage to 14.1 (hooked to a 1K load resistor) so when it was actually attached to a battery to get 13.8 volts on the battery. Just setting the 7805 to 13.8 and then hooking it to the battery didn't do it. Plus, I really don't understand what all the affects are of the TIP41, diodes and such. They are biased to cut the device off at around 9V, but what the heck else are they doing?

Yes, I know that the battery will change over time, I take measurements over days, not a few minutes. And yes, this project is slow because I have to wait so long for things to change and stabilize. I'm also working with known good batteries as well as some not-so-good ones.

Oh, I posted it in the bar sport because it was so far off subject.

Oh, I posted it in the bar sport because it was so far off subject.

On the left is a DC wall wart that supplies 20V open circuit or around 15 when the device is attached to a battery. On the right is a flooded cell 12VDC car battery. Well, actually some wire, a couple of clamps, and then the car battery. This is shown on the second picture.

No Arduino connected to the battery? This is just about charging a 12 V lead acid battery?

No arduino, this is the entire circuit. That's why I said it was off topic.

Now, how about it? How the heck does this thing work? I understand the voltage control and I added a diode to keep it from running a battery down if the wall plug gets kicked out of the socket. I can set the voltage to darn near anything (within reason) I want with a little 25 turn pot. I just can't figure out why they use a transistor in series with the ground return and have an LED and diode in the base circuit. It also misses the target voltage by a half volt or so when in circuit on a battery.

You've contributed significantly to the forum. I think we can cut you some slack.

I'm moving this topic to General Electronics to give it more attention...

The objective here is to have a number of cheap float chargers for several vehicles that may set around a while without being started. Things like tractors, generators, quads; that kind of thing. Also, there are often reasons to set a battery aside for months before using it like some people do with boat batteries. I have this problem with some of my vehicles and I'm getting tired of the batteries being dead, or worse, bad when I want to use them. So, I've seen these little harbor freight chargers on sale for as little as 3.99 (US) and I can't possibly buy a wall wart, circuitry, components, etc for that little amount of money.

However, I also want to know how they work and what improvements need to be made for different batteries. For example, the float voltage recommended for AGM batteries is lower than flooded cells, which is different from gel cells; and I have all three kinds in various vehicles. Good float chargers can run as much as $50 and not so good ones are $20. I want to repurpose these little things to be a good one for less than that.

And, yes, I've considered just cutting the circuitry I don't understand out and relying on the 7805 wired up as a variable supply to do the job. But I keep wondering what they intended with the other components in the circuit. There must be some purpose that I don't understand completely. It's not like engineers to add stuff they don't need (well, not usually).

Assuming you traced the circuit correctly, the only purpose I can see of the 2-transistor circuit on the right hand side is to cut off the current (and turn off the LED) if the battery takes too much current or is shorted. However, I don't think it is particularly good at doing that, because the level of current at which it will cut off depends on the gain of the TIP41.

Thank you. That's exactly what a little testing indicated. If I just short the output leads, the device shuts down; it also shuts down if I connect it to a battery that is in bad shape and has discharged below 9V or so.

It also misses the target voltage by a half volt or so when in circuit on a battery.

Could it possibly have something to do with the voltage drop across the diode that you have added to the original circuit?

A bunch more testing in circuit led me to look at the regulator. I'm not totally sure about this, but it appears that the 'good' regulation of a 7805 isn't as good as I thought it was. With a supply a couple of volts higher than the regulator I get about a half volt deviation between no load and an amp of load. That's not a bad thing necessarily, but it does make fractional voltages a bit of a problem. This problem is increased a bit by using the 7805 as a variable supply. The variable version (317) does the same thing, so no help there. Yes, I could stabilize it with an op amp and temperature compensation, but that would be defeating the purpose (remember, cheap).

So, my plan is to get a good battery that is fully charged (have a couple of those) and set the thing to crank out 13.9 volts on float. If the battery water drops because I'm putting too much in, I'll drop it a tenth until the water loss is minimal. Then, at least, I won't have to constantly worry about the water level in the darn batteries dropping below the plates and destroying it. It should avoid most of the sulfation due to loss of charge also. I'll just ignore the open circuit voltage like I never noticed it.

Thanks floresta for the diode suggestion, that got me to measuring things under load at the circuit level. There was one other thing that I noticed, the wall wart voltage drops down to around 12V when a load is put on. That made things complicated until I used my bench supply and cranked it up to 20V to be sure the supply was strong enough.

draythomp: A bunch more testing in circuit led me to look at the regulator. I'm not totally sure about this, but it appears that the 'good' regulation of a 7805 isn't as good as I thought it was. With a supply a couple of volts higher than the regulator I get about a half volt deviation between no load and an amp of load.

The dropout voltage of a 7805 is quoted as 2.0v typical. The worst case may be more. So you should test with a higher input voltage, or else use a low-dropout regulator in place of the 7805. Also, if you don't have an adequate heatsink on the 7805, it may be going into thermal limiting.

I wouldn't use a 7805 in that application, I'd use either a regulator intended for variable voltage (such as the LM317), or a 7812 so that the adjustment needed to the output voltage is smaller and the effect of the ground terminal current is less.

I tried it with as high as 20V and plenty of current availability. I think you're right about the current to ground being a possible problem; I'll have to check that....as soon as I replace the 7805. I lost it by having the output voltage higher than the input voltage and no diode to protect it. Knew better, still made the stupid mistake. But, that's what experimenting is all about.

The set-up works like a charm and has for the past 7 years. I can float charge 5 batteries all winter. They range from a 4AH dirt bike battery to a 40AH garden tractor battery. The present batteries range between 5 and 8 years old, so it seems to be working well.

I just give each battery a good, full charge with a good automatic unit, which brings them to 14.5V, keeps them there for about 3 hours then switches to a 13.4v float. Once they reach that, I move them over to one of the LM317s. The LM317s will limit current to about an amp and will actually charge the batteries quite effectively (if slowly for the bigger ones), but once the batteries settle in at 13.4, all five together only draw about 220ma.

That’s the kind of information I’ve been searching all over the web for. Information overload keeps getting in the way. I was going to start at 13.9 and work down because I’ve lost many more batteries to undercharging than over charging. The idea was to make sure the water didn’t go away too fast. 13.4 sounds like a good number to start with since it should be a full charge; if I haven’t misunderstood something along the way. I only had one 317 to test with and it seemed to have the same problem with open circuit vs load regulation the 7805 had. I only tested this a little though.

I’m trying to keep this as cheap as possible and the 317 has a different pinout than the 7805…right? That would mean some creative mounting inside the case.

So, if I read your note correctly, you have one big DC supply and you charge all the batteries from it by putting a 317 in the middle for each battery. Right?

draythomp: ..... I only had one 317 to test with and it seemed to have the same problem with open circuit vs load regulation the 7805 had. I only tested this a little though.

I've not seen this problem with the LM317. Using the ground pin for adjusting the voltage on an LM78XX the way you have done it would make it more vulnerable to load regulation problems as that ground input is quite low impedance. You would normally employ a op-amp as a buffer, but neither method is ideal.

I'm trying to keep this as cheap as possible and the 317 has a different pinout than the 7805...right? That would mean some creative mounting inside the case.

Yes, it's about as different as you can get.

So, if I read your note correctly, you have one big DC supply and you charge all the batteries from it by putting a 317 in the middle for each battery. Right?

so I've been looking into a float charger that doesn't let the battery discharge or boil the water out over time.

If this is important you should reconsider the price issue.

I have good experience with chargers from ctec. I know they are expencive but they will keep your battery in good condition.