Want to do a small project mostly for fun and don't want to spend a lot of money. I want to install a wideband sensor on my dirtbike and use a arduino to read and monitor the values. Eventually, I might even experiment and have the arduino add extra fuel when lean, it's a carb system so the fuel system is mechanically controlled.

Based on what I have already looked up, this doesn't look very feasible unless you spend $100+ and buy a controller.

Has this been done before, either on the cheap or with just a arduino and a wideband sensor?

As with every sensor: find a sensor that comes with a data sheet, Arduino library and sample code.

Or search the forum or web for similar projects.

You can't do it with a carburettor. You need at least a single point injection system to do that.

How do you aim to adjust the mixture to keep the correct O2 reading with a carburetor.

I don't want to really focus on the fuel mixture with a arduino as I would probably never actually do it unless I got another bike and turned this into a project bike. But best I could come up with is set the carb on the lean side if at all and stick a injector between the carb and engine in the intake pipe and control it via arduino, a cheap fuel pump would be needed to of course.

The main point of this project is to get the carb dialed in perfectly for the most power, and monitor it afterwards in case something changes.

If you are going to do that, then get a scrap carburettor and drill that for the injector. It will only be used as a throttle body so you don't feed it with fuel at all. Have a look at Speeduiono etc for control thereof.

AJLElectronics:
If you are going to do that, then get a scrap carburettor and drill that for the injector. It will only be used as a throttle body so you don't feed it with fuel at all. Have a look at Speeduiono etc for control thereof.

Well, like I said before, I'm probably never going to get too far into it. The arduino and wideband project interests me at the moment cause it allows me to dial in my carb 100% perfect. I can dial in a carb really well and make it butter smooth, however some fuel mixtures clearly make more power than others and the only thing I have to gauge that power is my butt dyno, not very accurate. Finding an ideal fuel ratio with a wideband would be much more effective.

As for the scrap carb idea. It's not bad but I would never want to rely completely on a makeshift system, plus my bike doesn't have a battery mounted and doesn't supply power until the bike is started, keeping the idle jet would be needed at the minimum. Also, I used to run e85 at one point but I had trouble dialing it in perfect. Heard from someone else who did something similar said the first 10 min. the bike needed less fuel and then later it needs more as temperatures rise in order to run smoothly. I don't plan on running e85 again anytime soon but, a fuel system that's slightly controlled by a arduino would prove reliable enough not to leave me stranded worst case scenario thanks to the lean carb, but effective enough to keep a bike running smoothly with changing demands at best.

I have looked into this myself and while it's not cheap it looks to be a far better solution to anything I could hack together myself.
Lambda Shield for Arduino (Wideband Oxygen Sensor)

For the Oxygen sensor you will also need a power source for the heater side .
Bear in mind the output from the sensor is not linear ( exponential with Oxygen) and as it measures oxygen it probably won’t work on your bike - on any IC engine combustion is not complete and the catalytic converters takes care of that ( with the help of accurate metering fuel injection ) using the excess oxygen to convert the CO etc) , so even if it’s running rich you are likely to see Oxygen left over from combustion, some of this might get converted on the sensor , but the result could still be inaccurate or even meaningless .

Hutkikz:
I have looked into this myself and while it's not cheap it looks to be a far better solution to anything I could hack together myself.
Lambda Shield for Arduino (Wideband Oxygen Sensor)

Yeah, I came across that also, it's a little more than what I'm willing to spend at the moment. 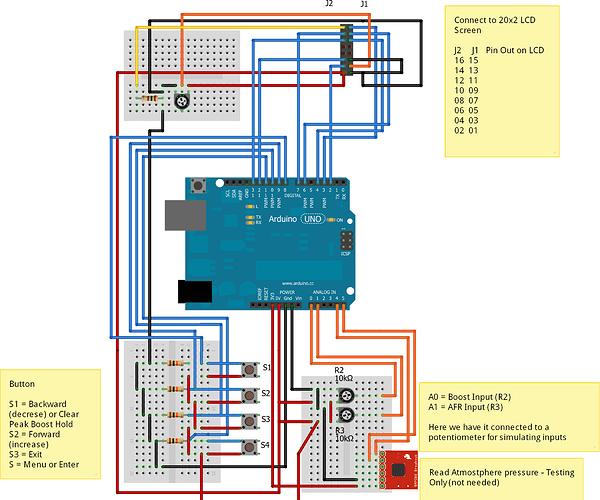 I came across this which looks a little complex, but he won't give you the *free code unless you enter all your personal information on another page including payment info looks like.
Looks like a scam.

Wish there was another way to measure A/f for this purpose.