What insulating material is currently between the thermocouple junction and the thing being measured?

I would be trying to measure air temperature. However it would be mounted in metal.

Thermocouples should not be electrically grounded. The MAX31855 actually has an error code to report this as a fault.

How do you mean "changing too slow"? The very tip of the thermocouple should have the best thermal conductivity to the thing being measured. If measuring air, it should be exposed to the air. If you need it to be sealed (eg. corrosive gases being measured) then it's usually best to buy a thermocouple already encapsulated for this purpose. This often means you are buying industrial devices that cost much more than your Arduino.

This one would be measuring the temperature inside a smoker. With all the moving around I feel like the junction should be covered.

I'm worried about the non-grounded thermocouples "changing to slow" because I used another to monitor the temperature of a wood stove but it took so long for the heat to penetrate all the way through to the junction. For example if the heat was rising and I got a reading of 500 degrees the actual temperature was already way above that. The temperature readings were right but just changed too slow

To detect rapid temperature changes you need a small mass with a high surface area which means using thin non-insulated wires with a small junction.

Attaching any kind of metal (grounded or ungrounded) will not help unless the metal has a high surface area to mass ratio and a high thermal conductivity. Perhaps 0.1mm copper foil would work?

Small sensors don't last long in an oxidising environment. Pyrometry may be a better solution.

As I understand it if you use a grounded thermocouple then the thermocouple amp must be
floating (powered from a floating supply and isolated from the rest of the system, such as
a battery-powered unit).

In general you probably want to avoid that complication. How fast a response do you want?
What temperatures are involved? Thin-film thermistors are probably faster if you are talking
moderate temperatures.

Hi,
You need a "naked bead" thermocouple,
google it 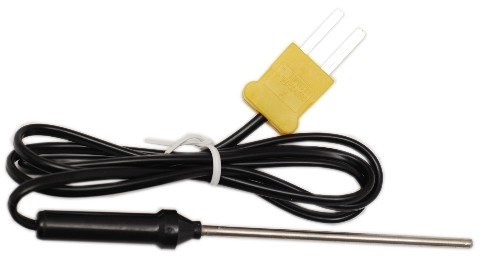