I received my Nano IOT a couple weeks ago and haven't been able to use WIFI. I started debugging by looking at the firmware version using the example sketch in the WIFI Nina library. This was the output:

Thank you very much! 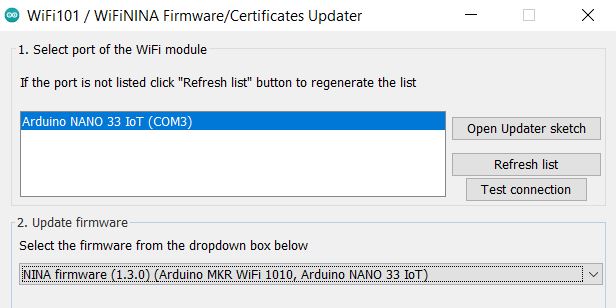 I had a look around and here is what I found.

while the library gets installed into your project folder. So, I guess the firmware is part of the IDE install.

I also found the following file on GitHub

This was changed 5 days ago while IDE was released before that. Maybe the firmware will be included in the next IDE update. You could build it yourself from the source if you feel like it. There is a description on GitHub (looks like a bit of work).

Here are the changes from the file above.

Thank you very much! I think I will wait for the IDE update and work on other parts of my project. Do you have any idea when the update will be released?

dkshark:
Do you have any idea when the update will be released?

No, but have a look at the following document. There are releases on a regular basis from less than a month to a few months.
If you go up one level on GitHub you can see they have started working on the new version 1.8.14.
Also, in the document you can find a hint about the NINA firmware being included in the IDE install. See release 1.8.10. If you go on to Arduino downloads and download the nightly builds, you will find the 1.4.0 firmware in the /arduino/tools/Wifi101/tool/firmware/NINA folder.
Copy this to your current version of Arduino.
Remember the library for Nina has to be 1.6.0 to support the firmware version of 1.4.0

I pulled 1.4 from the nightly build and put it into the arduino folder on my PC beside the other firmware versions. But the IDE does not show it as an option in the firmware updater - it only present 1.3 and 1.2.4 as options.

How do I get 1.4 to become a selectable option.

Oh my WIFInina library is at 1.7 if that helps.

I closed the IDE, downloaded the last build of the IDE here, extracted the directory (with its contents) arduino-nightly/tools/WiFi101 from the zip file, and copied that over the existing C:\Program Files\Arduino\tools\WiFi101. Things worked after restarting the IDE.

Thanks - that worked. I did the wifi101 folder and not just the nested firmwares folder.

Maybe that *.jar file had to be updated as well?

You don't have to update the entire IDE, as long as it's at least ver.1.6.10 (all in the instructions at the link) 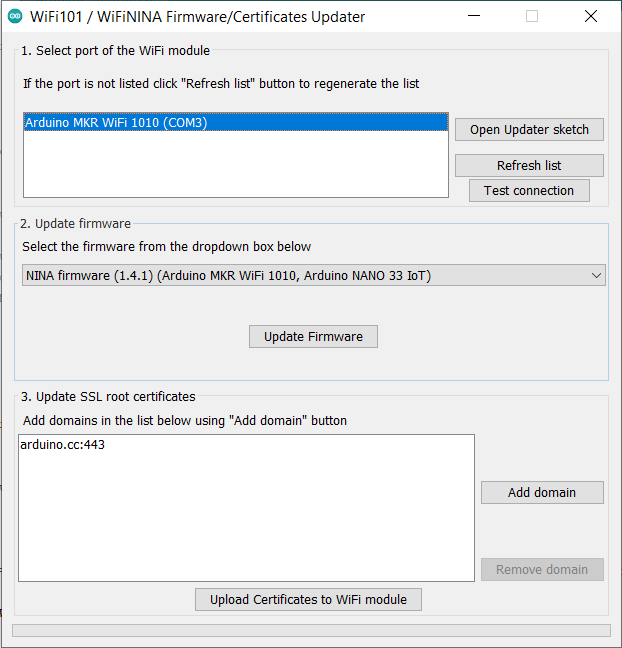 I tried it as well like the user "ocrdu" has done and it worked!

And everything startet with the message:

Would anyone assume, that the firmware is wrong?

and received in the serial window:

Then I knew, I had the wrong firmware!