This is actually something made by a pair of artists, where my contribution was the Arduino code and a relay-switch-module to drive the 220V flourescent tubes. The original post is here http://www.arduino.cc/cgi-bin/yabb2/YaBB.pl?num=1273837957

Originally estimated at a few tens of Euros/Dollars, and a brief moment to write the code and a few hours for the electronics it ended up costing about three times as much and more like 100 hours of work. There were unexpected ... problems.

Firstly the very simple&cheap interface circuit of one optoisolated triac driven directly by the Arduino and going directy to the tubes had to be changed for a Arduino to BCD-7Seg chip to transistors to relays. One circuit board became 5, and then the design was unstable and was replaced by a makeshift workaround using two Arduinos (one master, one slave) controlling two 7seg digits each (pincount limit). Why? Don't ask, it's too much typing for me :-/ 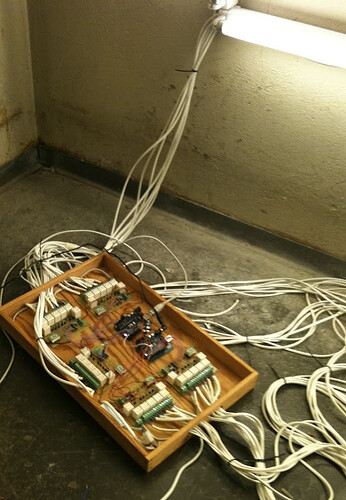 555×800 105 KB
Still, it works, and only needs to last a month or two (depending on how often the exhibit is shown). The code was enhanced from a simple i++; delay(13minutes); to something that did its own integer->7Seg conversion, the same code runs in both master&slave and determines where it runs, and communication uses one single TX/RX line. Two push switches enable setting the counter to an arbitrary value.

Here is the display with a person in front, for showing the size (the display is very bright, but the iPhone camera adjusted this down a lot) 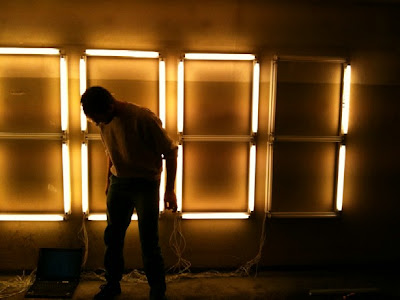 The exhibition venue has a link http://www.etikettmalmo.se/, but it ends soon (late November 2010)

When the exhibition is finished, I'll fix the problem so one Arduino can drive all 5 boards (each board latching it's digit's value).

Cool project, would like to have helped, but too far away from me

Why didn't you just use a mega instead? It should have plenty of digital pins to control all the relays

Yes, indeed, but the available Arduinos were two Extreeme models.

Some shift registers(like the 595) would solve that and work easilly with the shiftOut() arduino function, so, is it a clock?

there are lots of abandoned factories in maastricht... would be fun building something like that in one of them...

Some shift registers(like the 595) would solve that and work easilly with the shiftOut() arduino function, so, is it a clock?

I used a latched BCD-7Seg chip on each board so one Extreeme could drive more than the required 5 digits, but the chip/board failed to work reliably without a major rework (effectivly start from scratch) even though on paper it was a good and correct solution. I've thought of shift regs or ather latch logic, too, but choose the BCD-7seg to keep it "simple and obvious" in design. It's not really a clock, even though it counts regulary

Originally estimated at a few tens of Euros/Dollars, and a brief moment to write the code and a few hours for the electronics it ended up costing about three times as much and more like 100 hours of work. There were unexpected ... problems.

Ain't that always the way

Well done though, and good on you for perservering to help these guys out.

Some years back I was involved in a flashing wall using florescent tubes. (they had 11 columns and 3 rows...but thats another story)
We tried all sorts of methods to get a resonable rate of flash.

In the end we used Phillips?? Dimmable ballasts, and simply shorted out the 10v DC control, which made the lamp drop to about 3%.

There are fast start ballasts that provide 1500v to the lamp to create a fast arc, and thus enabling a faster rate of on-off.