I'm powering my speedometer standalone board using the automotive power, which sometimes measures 13 volts. In less than a minute my voltage regulator gets hot to the touch.

The 7805 voltage regulator I'm using is supposed to be able to handle that kind of output, but the difference between 13V and 5V is pretty hefty. I have read here that it's not recommended to use this kind of set-up for exactly this reason. But I calculate the dissipation should be less than 2 watts. I am pushing the 328, sometimes lighting 13 segments of the LEDs at 14 mA each. Sometimes that pushes total power used to over 200mA. Two watts doesn't seem like too much to me, but it is getting hot. So what are the alternatives?

Should I just get a big heat sink and forget about it? The "thermal shutdown" apparently hasn't been activated, so it isn't getting TOO hot, but I'm pretty sure it would blister my finger if I touched it for a second or longer.

Would that just move the heat from the voltage regulator to the resistor?

Yes and it would have very poor regulation.

but it wouldn't be any less heat, would it?

Should I just get a big heat sink

and forget about it?

No.
A heat sink will help but if you want to remove the need to burn off the power then use a switching regulator.

It would only be poor regulation if the voltage drop across the R dropped Vin to the 7805 to less than 7V.

Rather than putting in a couple resistors, it would be better to put in several diodes to drop the auto voltage.
I believe that your max voltage from an automobile system (running) can get closer to 14.5 volts on occasion.

The best way to get rid of the heat, is a switching regulator as previously suggested, such as:
http://dx.com/p/kim-055l-dc-12v-to-dc-5v-5a-buck-converter-step-down-module-green-227205

Using diodes is a good idea, Jack. I think I'm going to try that first and see how it works.

Also I forgot to ask about the capacitors on the regulator, what values are you using?

.33uF on the input, .1uF on the output. That's what the datasheet recommended. Should I try something different?

I tried it without the .33uF just to see what would happen. Boy did that ever not work! It was fine until the Hall effect sensor went low. Then I got noise like crazy.

The best way to get rid of the heat, is a switching regulator as previously suggested, such as:
http://dx.com/p/kim-055l-dc-12v-to-dc-5v-5a-buck-converter-step-down-module-green-227205

And indeed, that would be a suitable approach. That's a really cute picture!

Short of that, put a heat sink on it. Why do you suppose it has that big metal tag with a hole in it? Decoration?

Yes it is for a static case, but in practice there is is a dynamic case to consider.

2 - Why are you using an external regulator? Granted there is this "heat" problem, but the Arduino has an on board regualtor.

I was working on a project recently and had a similar problem to what you are saying.

I had a 12v supply and 12v circuit. Alas the Arduino outputs are 5v.

I was driving CMOS chips (at 12v) from the Arduino. There was a problem with the two different voltages.

While building it I was noticing the regulator was getting HOT and didn't understand why.

Seems that if you put 12v into the Arduino's outputs, it gets upset.

It still works, and I have since changed the circuit to fix the problem.

Some things I would suggest you do:
Get ONLY the circuit - no inputs, no outputs.
See what happens with the regulator heat wise.
If it is cool/ok, connect the outputs and repeat.

Then, all being good, try the inputs.

Get the 12V to 5V switching converter. If you use voltage regulators, you are wasting a huge amount of power, that's
what makes all the heat.

So I hooked up my standalone board to my ammeter and watched the current usage. It's pretty consistent that each LED segment that is on uses 14 mA of current. I can watch the current change as I change speed and it's quite linear. 11 MPH uses the least, and 08 uses the most I'm likely to see. So Grumpy Mike, you are correct that the load currents will be changing. Several times a second if I'm accelerating or braking. Also, the I blank the LEDs out if I don't get a signal for two seconds, and the regulator cools off quickly when I'm waiting at a stop light. In fact, if I travel at 11 MPH for a little while, it cools off as well. So I'm pretty confident it's the high current that's causing the heat.

My breadboard works really well, but it's big and ugly and those bare resistor wires are not acceptable. I have designed a nice small PCB that I plan to have manufactured, and then I'll put it in a little black case so it can be stuck just above the steering wheel. I would also like to include an "upside down and backwards" mode so I can put it on top of the dash at night and have it reflect the speed reading off the windshield. I don't want to include a big switching power supply in my box. That would increase the size and cost too much. I could maybe use a buck converter chip and put it on my PCB, but I'm running out of room in my little box. I'm not too concerned about wasting the power--cars waste an awful lot of energy as it is and the extra two watts is no biggie.

I tried adding some diodes. I have some 1N4007 ones that should work. The datasheet says they drop 1.1 volts at 1 amp. I put 4 of them in series and they only dropped 3.2 volts total when I maxed out the display at 08 MPH. The voltage drop wasn't consistent--it was less when I was drawing less current. Which is OK, because my voltage regulator would be dissipating less power then as well. The diodes didn't even get warm, and the voltage regulator didn't get as hot. Maybe I'll try just stringing 8 of them in some heat shrink tubing and insert them in the Vin line under the dash. Even with the diodes in line, my voltmeter read 4.99 volts consistently out of the voltage regulator, regardless of how many LED segments were lighted.

Probably the best idea is what you guys made me realize--that I don't necessarily need to have the power regulation on-board. Maybe I'll get one of those buck converters and put it under the dash and just run straight 5V power to my little black box. I can free up some of the real estate on my board for another mode switch or dimming control or something. Also, I can install a 5V charging jack (or 10) so my wife and kids can charge their phones and MP3 players and such directly. That should give me some extra points. 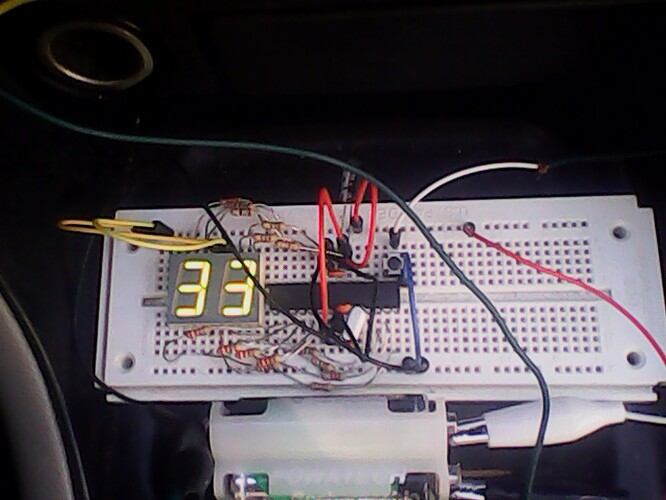 Great TanHadron. Sounds like you have a good handle on it now. Good Luck, Jack

oric_dan:
No matter what you do, Vin and the load currents will always be changing. Motorcycle battery voltage is going all over the place, etc. The only way to get a stable Vin to the 7805 is to use a regulator to feed the regulator. Series diodes won't be any better than series-R. The 7809 scheme might be the best.

The goal here is to distribute heat across several components. With series R's you introduce a voltage drop that will fluctuate with load variations. With series diodes however, the voltage drop is fixed and so is preferred in this context.

I would stick with the 7805 but use a heatsink. The 7805 can easily dissipate 2W with even a small heatsink, but without a heatsink it would exceed the maximum junction temperature rating of 125degC. Choose a heatsink with a thermal resistance of 20degC/W or less, for example http://uk.farnell.com/fischer-elektronik/fk-224-sa-220-1/heat-sink-to-220/dp/4621116.

All you guys are right I am sure. There are so many ways to get from A to B. One way may not be better than another. How about a combination. I think the goal here was to reduce the heat on the regulator.

We should expect the 7805 to get hot anyway, but not enough to blister your fingers.

BenF:
The goal here is to distribute heat across several components.

Just a little hint - it doesn't have to have lots of fins. Mount it on a piece of aluminium strap - preferably coloured. Mount it on the aluminium box you use for a case.

It really is dead simple. Not rocket science.

If I stick it to the ground plane, would that be sufficient?

BenF:
The goal here is to distribute heat across several components.

Don't quote me with crap like that. My comment is in reference heat sharing with diode vs resistors where another joker seems to think a resistor is the way to go. What the better solution is for the original poster is another story.

TanHadron:
If I stick it to the ground plane, would that be sufficient?

Possibly, if it is a large enough ground plane. But then it will heat up all the other components too. Better to use a small finned heatsink.

There are many roads to Jerusalem!

But reading the OP surely using a zener diode will be the cheapest, easiest and arguably the most reliable method?

Is there an argument against using a Zener here in this application?

Resinator:
Is there an argument against using a Zener here in this application?

There are at least two arguments against using Zener diodes for regulation in any application: