Hi, I am trying to build a soil conductivity meter with my arduino nano. I need to set up a Wenner Array like the one shown in the picture below. I have found this linkbut in here they use a battery. Now the current needed between the electrodes A and B can be really small, so it should be enough sending power with the Arduino. Any idea for schematics? My problem is that I am not being able to set any fixed resistance as to read a current with my multimeter between A and B. Thanks beforehand!

Hi, I am trying to build a soil conductivity meter with my arduino nano. I need to set up a Wenner Array like the one shown in the picture below. I have found this linkbut in here they use a battery. Now the current needed between the electrodes A and B can be really small, so it should be enough sending power with the Arduino. Any idea for schematics? My problem is that I am not being able to set any fixed resistance as to read a current with my multimeter between A and B. Thanks beforehand! 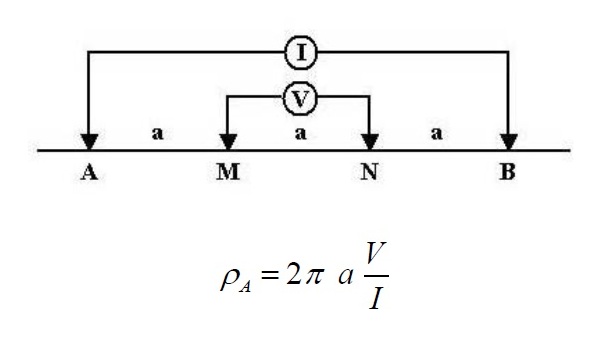 Are you wanting a constant-current source perhaps?

If it is in a plastic box then OK.

If it is real world testing you MUST use a battery supply.

And pick an AC frequency away from your local mains.

EDIT
Although a battery is shown the actual voltage applied can be far higher and with commercial test gear 50mA current is typical which can be fatal.

I guess DC it's allright folks. In the attached picture there's (in red) the current applied for a popular instrument from Swedish ABEM for doing Electrical Resistivity Tomography. But I only need a single current! That's why I want to just use the Arduino as a power supply. Because anyway I'll read the data with it.

So my question should be ask, just as MarkT put it: How can I get a constant power supply of 50mA with my 0-5V Arduino? 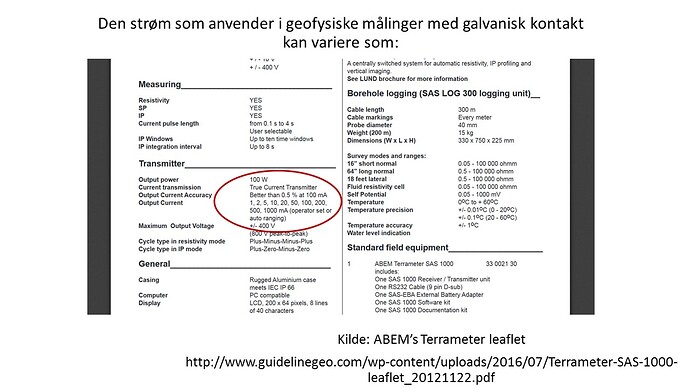 If you look at your first attatchment you will see the output voltage is +- 400V.
And 100 Watts power.
That is fairly serious electronics.

ivino:
. Because anyway I'll read the data with it.
Arduino?

No , the arduino has to be totally isolated from the current generator circuitry.

I am not building the same instrument.

Can I have a constant current source on electrodes A and B of 50mA from my Arduino?

I used to rent these years ago. As I recall they were pretty involved pieces of equipment and we abandoned the idea of building our own. But wow, we got pretty damn good at finding water. It is more of an art than a science and you will need some software to plot your results.
Good luck with it.

No Arduino is a constant current source, and there is an even bigger problem if you need more than 5 volts to achieve 50 mA.

I suppose that you could use an Arduino along with some other circuitry to measure the current and regulate it to some constant value, but I gather that this is not what you are attempting to do.

Not tested, just an idea... 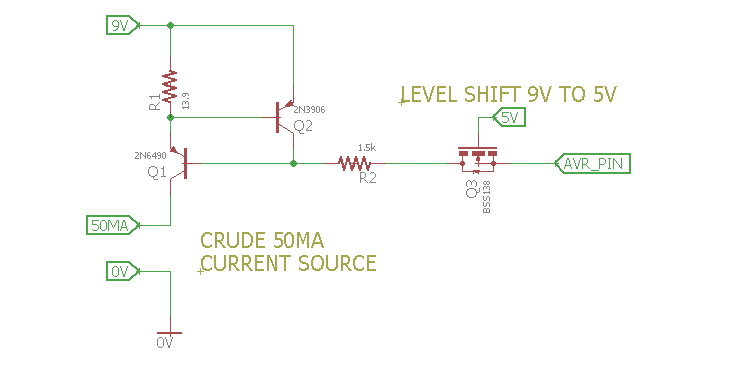 Can you say exactly what you are trying to do.?

How far apart are the electrodes and how deep ?

Hi,
I have had to calibrate these sort of devices, used to check earth conductivity around electrically grounded equipment.
They were not 400V devices, but used a few batteries, no CAUTION HIGH VOLTAGE warnings, might do a quick reverse engineer when the next one comes in.
However I googled and found this.. its fairly old, cos it uses "oak" rotary switches. but seems to do the job. 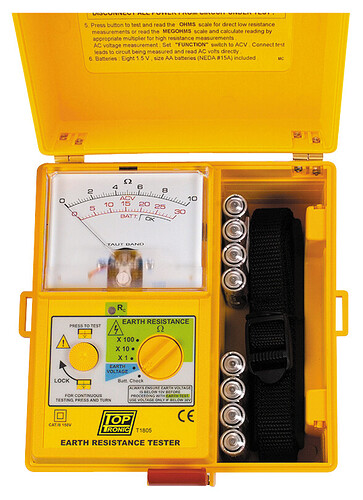 I explain a little bit more in detail what I have in mind.
I want to push a metal probe in the underground using a rig. The probe is going to have the four electrodes of a Wenner configuration, wherefrom A to B I want to send a really small amount of current in order to read the voltage difference between M and N, so that I can determine the subsurface resistivity. I only need to get a subsurface resistance value for the really immediate surrounding of the probe, that's why I do not need such a great power as the instruments used from the surface apply. The reason why I want to have a constant current source from my arduino is because I only want to be out there with my computer and the rig, so that I do not have to check whether the battery has enough power, change it....
Please find attached a sketch of the prototype.
I still think is possible to send a small amount of current from A to B with the 0-5V of my arduino, someone that can explain why I can't? Otherwise I'll change my strategy and go with only two electrodes, which will act as the unknown resistance of a voltage divider. 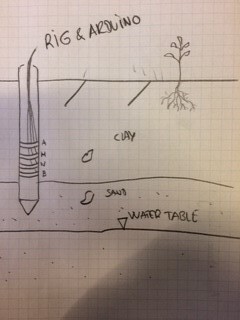 I do not know what you mean by

Why not just use a battery pack to output approximately 6 volts? (Of course, DC is going to mean frequent electrode replacement.)
Why not just use a voltmeter to measure the voltage difference between M and N?

As explained previously, an Arduino is a poor choice for a constant current source. I really like Arduinos but they are a poor fit for this application unless there is something (like logging) that has been left unsaid.

By 0-5V I mean that when I with a multimeter measure the voltage difference between the 5V pin and the GND pin of my Arduino, it gives me approximately 5V, so I thought, why not transforming it into current. But when I set a resistance between the two pins, no current is observed. Then if I grab a AA battery and connect the + and - poles through a resistance, I get the same: no current! I am just so dumb in electronics!
Then there ara some people claiming to build constant current sources from batteries. Can't I do that with my Arduino?
Cheers?

What resistance did you use? Too high a resistance will look exactly like that. Using the wrong type of meter or using a meter connected incorrectly will also look like that.

You can build a constant current source from the 5V pin and GND pin of your Arduino, but you will just be using the 5V regulator of the Arduino and whatever power source (probably USB from your PC) you have and not the microprocessor itself. It seems wasteful.

You could use the Arduino to measure the current and control the current so that the current is constant, but by the time that you add all of the circuitry that you are going to need, you may as well not bother with the microprocessor of the Arduino.

I think that the bit you are missing is that the current scource has to be electrically isolated from the measurement device.
Could be wrong though