what did i damage ?

hi, i am coming to you with a problem
i did the following setup
what did i damage ? 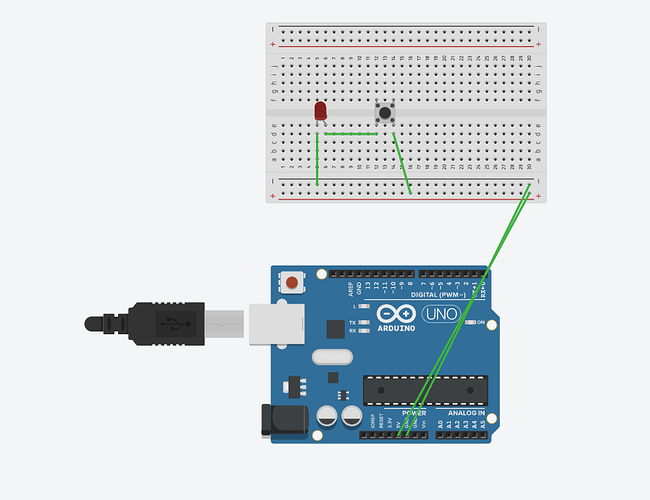 It appears you applied power to an LED with no current limiting.
You probably just damaged the LED.
Next time use a resistor in series, in the 270 ohm, 330, ohm, up to 1K ohm, to limit current thru the LED.

Thanks for the quick response, but i've got a couple more questions
Is it possible i damaged the 5v pin or the gnd pin from the arduino or any part of the breadboard ?

I would doubt it. LEDs are usually rated for about 20mA. 5V pin, Gnd, button, and the breadboard are all rated for much higher current than that.

ok i did the following setup again but all the leds ive tested only give out a very dim light, almost invisible
why might that be ? 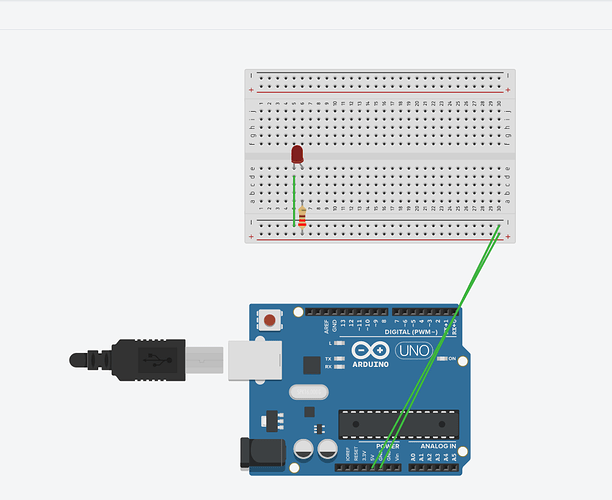 Altho if the LED failure results in a short circuit within the LED, that could possibly damage components on the Arduino board. Do you have a multimeter? With the LED removed and the board powered up, do you see 5V and 3.3V on the power header pins?

The resistor is 220 ohms
I do not have a multimeter

I tried using the 5v pin in combination with every gnd pin, same result and also the 3.3V pin with every gnd pin but this way the led didn't light up.
I have also tried setting a pin as output and setting it to high but the result is the same, a very dim lit led.

What other way could I find out what is at fault ?

Are you powering the board from a PC & the USB connector?

Are any of the LEDs on the Arduino board lit up?

When you connect to a PC, does the PC make the happy boop-beep noise that it recognizes the board?

Yes, the 5 minute delay can seem slow. We cannot keep up with all the spam the forum receives without it tho. The delay goes away after 50 or 100 posts.

Did you try flipping the LED around? Perhaps you have the anode & cathode pins backwards. You wouldn't be the first to do that.

Well the power comes from a laptop through an usb extender. I have tested it without the extender and the result was the same.

Yes, the pc does that sound whenever I plug the board in.

I don't think there's need of flipping the LED as it's in the correct position (the longer leg on the + and the other on the -).

I have spotted something else, the resistor's 5 band code is red red black gold brown which equals to 22ohms. I previously tought that it was a 220 ohm resistor.. The kit the arduino came with was supposed to come with three sets of resistors(220, 1k and 10k) and by elemination I picked the 22ohm resistor thinking it was 220.. my bad on that part for not double-checking. Might that have anything to do with this ?

As I recall I firstly tested the setup with a resistor(the 22 ohm one) and the LED lit up very poorly, as in all the other cases we've talked about, only then I removed the resistor and started smelling burnt stuff.
Since my last reply I've done several tests with 1k and 10k and it went fine.
My question is why is it that with a 22ohm resistor the LED lits up poorly and with larger resistors it lits up brighter ?

If you had a meter, you could confirm it's 22 ohm. Otherwise, I can't offer a guess.