What exactly does the term "shield" mean?

I'm sorry to ask such a naive question. It seems obvious that most things labeled as shields or shield kits are simply add-on type hardware, but I don't understand the use of the word and would like a little clarification.

P.S. This is my first post and there will likely be many, many to follow. I am planning on building an automatic ball launcher for my dog. Something to keep him busy during the day (and just to see if I can do it). I've a lot of experience with programming, but limited circuitry knowledge. Wish me luck.

The official definition is: 'Shields are boards that can be plugged on top of the Arduino PCB extending its capabilities.'
See: http://www.arduino.cc/en/Main/ArduinoShields

As to why call it a shield and not something in keeping, like 'scudo' , I don't know

Think daughterboard. It's a board usually the same size and shape of the arduino with peripherals, extra connection points for soldering, etc.

For instance, I've got a little stack I'm testing right now (prototyping half a dozen things at once, which I don't recommend as good practice) that has the Arduino, a homebrew video display driver (MAX7456), a commercial protoshield (think custom form factor protoboard) with temperature, pressure, and ADC components, and a homebrew datalogger prototype with a real-time clock and flash storage. That's the arduino plus 3 shields stacked on top.

If the shields are designed well, you can mix-and-match several of them to build your system. Sometimes the shield can't have another stacked on top (maybe the peripheral or connectors are too tall, maybe the designer didn't plan well, maybe you just ran out of the stackable headers when you were soldering it up).

Thank you for the quick, precise reply and for the link to the definition. I was having trouble finding that by searching Google or the forums.

I look forward to reading about your projects.

Thanks for the detailed explanation! That definitely will come into play eventually. I think to begin with, I'll only need a motor control shield (like the Motor Control v1.1), but eventually if I get good with this stuff, I'd like to add an Ethernet shield and see if I can get info on the launcher remotely. Now I know to plan ahead if I want to do something like that.

I always thought it was because unlike daughterboards, or add-on boards, the Arduino "shields" usually cover 100% of the original board space, thus "Shielding" it from view.

I always thought it was because unlike daughterboards, or add-on boards, the Arduino "shields" usually cover 100% of the original board space, thus "Shielding" it from view.

And also shielding us from seeing the pin13 LED and blocking the reset pin and ISP connector, unless the shield duplicates those features..

And also shielding us from seeing the pin13 LED and blocking the reset pin and ICSP connector, unless the shield duplicates those features..

I think the most annoying thing is the shielding of the ICSP connector because it can be used for so much... The reset pins aren't blocked normally but often the reset switch is not duplicated...

I would normally think that pin13 LED isn't that important but I use it a lot as I suppose a lot of other people do when testing things, it is just so handy to not have to plug in an LED

An LED or two for testing is very handy. If you solder a small 1k resistor to one of the LED legs you can plug these into any pin that is near a ground connection. 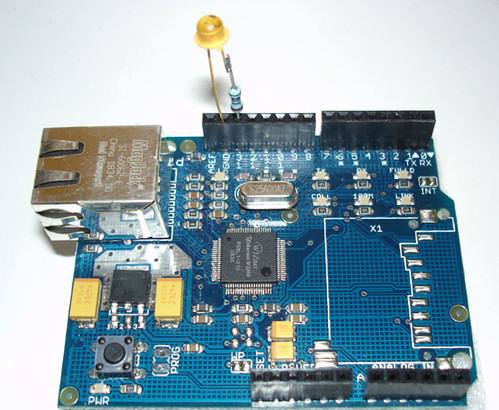