What hardware can drive one long row of 100 LEDs

What specific hardware do I need to be able to turn on one or more specific LEDs in a single row of 100 LEDs using an arduino? All the tutorial are for a matrix but that's not what I'm doing.

All the tutorial are for a matrix but that's not what I'm doing.

What if you think of your 100 LEDs as a 10x10 matrix, unravelled into a thread?
Does that help?

If you want dimming control over them then:-
http://www.elcojacobs.com/shiftpwm/

I don't need dimming control. I need to be able to turn any number of them on in any combination.

So just the shift registers without that software then.

Grumpy_Mike:
So just the shift registers without that software then.

I've done several arduino projects in the past but have not clue what you're talking about. Is there a tutorial/example?

Jut don't fit the capacitor on the latch pin.

In other words, you can use it to control 8 outputs at a time while only taking up a few pins on your microcontroller

You don't understand you can control all 100 LEDs at the same time, you just cascade shift registers.

I see. Now I've noticed another potential problem. Each chip only controls 8 leds. Don't they make a chip that controls 100. I don't want to buy 12 chips if there is already a better solution.

Consider the alternatives ... either you can buy the 12 separate shift registers and control 96 LEDs, or you can invest in an addressable LED string, where there's an IC for each individual LED ... that's 100 LEDs plus 100 ICs ... You do the math.

Personally, buying the 12 shift registers is the best solution here. Otherwise, go back to square one and re-think your project and hardware.

Tell me more about this "addressable LED string". What's supposed to be the bad thing about it? cost? Is it more of a pain to assemble?

I found some of them online. I need a custom LED strip made where the LEDs are a specific spacing and all are addressable. Where would I get that?

You are not going to find that unless you have several hundreds thousand dollars to spare, I assume you haven't.
You can get a chip that will control 100 LEDs but it will cost you about three times more than buying 12 shift registers and is considerably more difficult to control with an arduino. This is the MAX6954, google for the data sheet.

An other alternative is the shift bright 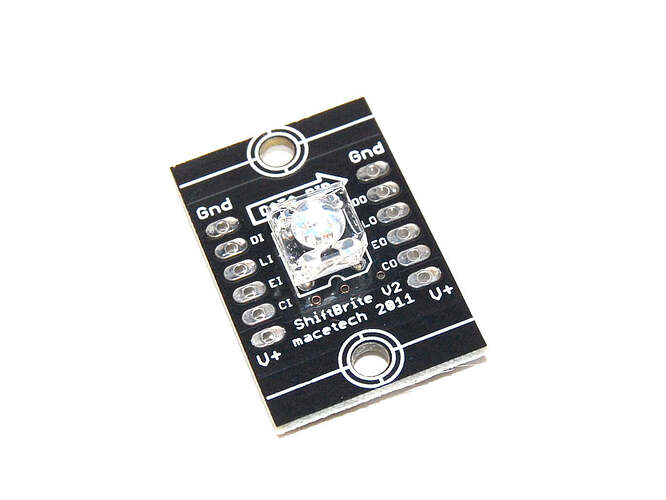 The ShiftBrite is a high-brightness LED module containing red, green, and blue elements. It uses a simple clocked serial interface to receive a 10-bit brightness value for each color, resulting in over a billion possible colors. Each input is...

While cheap once you multiply by 100 it gets expensive.

If you want cheap and simple then use shift registers.

OK. It looks like this http://arduino.cc/en/Tutorial/ShiftOut is the best option then. The length is 4ft max. Why do I not want to use the capacitor? Is that the only thing I'll be doing differently in that tutorial?

I've got the parts ordered.

Why do I not want to use the capacitor?

Because it will destroy the output pin by causing it to source and sink too much current. Instead the capacitor should be placed between +5V and ground on every shift register. A 0.1uF ceramic capacitor is sufficent.

I don't know what the shift register is. Can you fix the image below to illustrate what you mean. Also, is there a way to avoid using a resistor for every LED?

Also, is there a way to avoid using a resistor for every LED?

Not with a shift register no.
Don't put the capacitor in, that is the red blob in the middle board.

Now I'm getting two different answers. One says to put the cap somewhere else and the other says not to have one at all.

Why not use two MAX7219 or MAX7221?
Each can control 64 leds.
Resistor per LED is not needed.
LEDs are hooked up in groups of 8 and connected to the MAX7221.
Each LED can be controlled individually.