What on earth is this?

Over the weekend, I helped my brother clear out his loft, because they are moving home. In it, we found this ancient bit of valve equipment, which we have totally failed to be able to identify.

There is of course the possibility that it is extraterrestrial in origin! He did have the roof repaired a while back - maybe it fell to earth from an alien spaceship?

From the Planet Eindhoven, I imagine.

Since they landed in Eindhoven in 1891, they already got a musuem.

I wonder if they would like to add a ?????? to their collection?

I have emailed the museum to see if anyone recognises it.

It's funny, I never knew it was philips, but my first uC-project, an RGB mood-light..., apparently is housed in an ancient infra red lamp armature.

I hope they'll be able to identify it, Philips has been "life" for a lots of people in the region Eindhoven. I've visited the museum 30 years ago, but guess there will still be enough old workers they could ask if they don't recognize it.

Hilarious questionnaire by the way, it almost seemed they were worried I would be influenced in my future spending habits after visiting a museum.

One thing that worries me, would they tell you it's an interocitor if it is ? :D

My best first guess (without seeing the inside components?) is that it is some kind of variable voltage supply or something (my first though was the S and P indicators were for "S"econdary and "P"rimary - an adjustable transformer - but you don't mention anything like that on the inside, so...). Maybe its an early switching power supply? Pictures of the inside might help in identifying it (does it have a schematic included anywhere on the inside?)...

I would guess some sort of tuner. The switch sets the range, then the P & S knobs are the coarse and fine adjustment. The two holes on the side look like plugs for headphones.

Could it be a shortwave receiver?

Thanks for all the suggestions.
I think its time for the back to come properly off and have a really good look inside. I’ll take some more photos when I get home from work tonight.

The Philips museum came up trumps:

I asked if they wanted it for their collection, but they already have several.

Anyone interested in it as a restoration project,? Its yours for the cost of postage or collection. It currently resides in York - England. 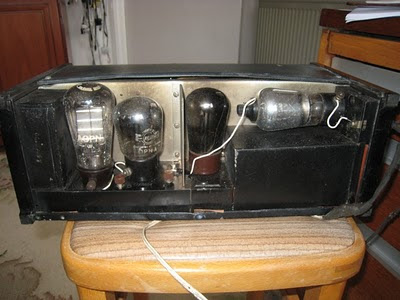 Although, I should warn you that it is very heavy - so postage costs are liable to be high.

I kinda thought some sort of radio, but convinced myself it wasn't because of the headphone jacks

Stupid me forgot that there was a day when 3.5mm jacks didn't exist

For me it could have been anything, nice to see you got an answer so quickly. Isn't there a HAM-group in York ? I bet you could make some HAM nearby very happy.

Isn't there a HAM-group in York ?

I'll get on to them.

Thanks for your help everyone. Simpson_jr - the Philips museum was a great idea.

Isn't there a HAM-group in York ?

It's very cool when you can find someone who appreciates junk that you don't want.

Some years ago, we had a large oak tree fall on our house. Insurance covered removing the tree from the house, but not actually carting away the pieces. So I asked (free firewood?) and someone suggested I contact the "East Bay Wood Turners group", or something like that. These are guys who like to chuck a big chunk of wood in a big lathe, and end up with a bowl or something. It worked great: early in the morning, about half a dozen old guys with chain saws and trailers showed up an carted away most of the tree; all the while chortling about what a lucky find it was (large chunks of oak normally being rather rare and expensive, apparently.) It lent an interesting perspective to the whole event.

Encouraged by the high cost of energy at the moment wood burning stoves are a real trend over here (uk). We had to cut down a dead cherry tree in the front garden and about 3 people offered to take the wood away to burn.

We have an open fire, so the answer was 'sorry no'.

Lets hope we are moving into an age of efficiency and re-use!

It worked great: early in the morning, about half a dozen old guys with chain saws and trailers showed up an carted away most of the tree; all the while chortling about what a lucky find it was (large chunks of oak normally being rather rare and expensive, apparently.) It lent an interesting perspective to the whole event.

Most places seem to have a local freecycle group now (freecycle.org) which is great for getting rid of stuff and sometimes getting stuff.