What's in your parts bins?

I'll start it off with dumping out my LED bin: 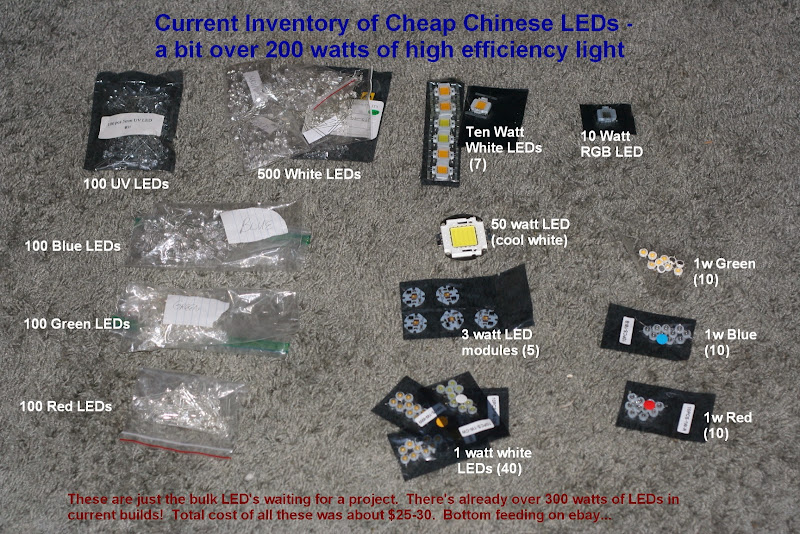 An alternative to the "I just bought.."

This is "I have this sitting in a bin waiting to be misused for some amusing purpose..."

50 watt LED?!?! What is that a mini sun? Do you use it to light entire countries?

There’s another thread ongoing about a 100W LED - with a massive uP heatsink to keep it cool.

CrossRoads:
There’s another thread ongoing about a 100W LED - with a massive uP heatsink to keep it cool.

!!! the idea is to provide light, not signal intergalactic beings!

I am a photographer and experiment a bit with lighting, in particular, I am using LED’s in the place of a standard photography flash…my current build consists of one hundred and forty and change watts. Besides, I got that 50 watt monster (one of two I have) for three bucks. You would be surprised how cool (comparatively) it runs. When heatsinked, you can put your finger directly on the emitter and it is only warm.

I admit I am a junkie for blinkie lights… You know, I also forgot the 72watt wall wash RGB LED’s, color mixing done with an Atmega8 running Arduino code. It also uses the internal RC clock at 8mHz, so there’s no resonator or crystal, the whole “arduino” is the ATMEGA8, 7805, and a couple of caps. I’ll be writing the build up sometime soon.

I tend to bottom feed on ebay for cheap components… Sometimes you get a great deal because something just slips through the cracks and doesn’t get bid up. For example, since I had them, I included three 5k linear potentiometers for color adjustment. They are from a ten pack I got a while back for something like a dollar and a half, some wholesaler on ebay. Fifteen cents each, nice quality. Granted, that is a fluke, but I have long hours to go fluke fishing…

I have probably a hundred and fifty NPN standard transistors, 3904 and 2222 mostly…
Thirty logic-level N channel power MOSFETs
A dozen TIP41c and half a dozen TIP120…
a half dozen ULN2003 arrays… And a handful of assorted SCRs and TRIACs.

That’s the transistor drawer at the moment…

speaking of those 50 watts led's what voltage do they run at? 3 volts 16 amps? also where can I buy them XD

That one runs at 1.5amps 36v. The one I already have in use is 17v at 3A. You have to be willing to build your own drivers unless you want to buy theirs…

I get my LEDs off ebay, that one was a fluke buy, but the first fifty watter I bought full price for sixteen dollars… A rare thing for me. The one watters are typically around a dollar to three dollars for a pack of ten. Ten watters are usually around five dollars now. These are auction prices, add a couple of dollars if you buy them outright…

CrossRoads:
There’s another thread ongoing about a 100W LED - with a massive uP heatsink to keep it cool.

Supposedly a 100W LED. I just don’t know if that means it draws 100W or the output is equivalent to a 100W incandescent bulb. Something to measure, I guess. Does anyone know how LEDs are rated, I guess I should ask. Is a 1W/10W/100W LED the current draw or the equivalent to incandescent light, or something else? For that 10W RGB LED is the 10W rating for all three LEDs in unison (i.e. 3 3.3W LEDs)?

The LED and driver:

OP has been getting much better deals than me. Where did you get those 10W RGB and 1W blue LEDs? I would like some of those. Do you have a link to the auction?

One more thing. I see a total deficit of LED matrices. Those are the most fun. Gotta have some matrices and some multi-segment displays.

It's the current draw.

Typically, you get somewhere around 70-90 lumens per watt of most colors. The high wattage LEDs are just arrays of one watt emitters, they do run a bit less efficient but save a lot of soldering.

Just do a few ebay searches...

Well, we're waiting. Or does your camera not have a lens with a wide enough angle? ]:D

Valalvax: !!! the idea is to provide light, not signal intergalactic beings!

Speak for yourself! :grin:

Yes, not wide enough angle. I was looking last night for a CP2102 module I had modified with DTR to Reset pin wire. Found 3 unmodified, MikroElectronika modules,relays, big (4"!) seven segment displays, bags of LEDs, bunch of sound modules from MDFly, several LCD displays, all kinds of parts from dip micro, banana jacks, nuts & bolts, Velleman PCBs... I need to clear some floor space just to spread it all out. Then I've got drawers of TTL components, resistors, caps, and PCBs that I bought to distribute here - 1284 DIP and SMD boards, 32U4 boards, TPIC6B595 boards. Modules & parts I've purchased from NKCElectronics, Gravitech, tubes of '328s, TPIC6B595s, 74AC299s, samples from Analog Devices, MAXIM, TI, SMD adapter boards, high voltage resistors and caps for tube amps, some Huge transformers for a tube audio amp I want to make some time (high voltage for tube supply, and for the output speaker drive), audio power tubes & pre-amp tubes for that amp, 3 boxes of random tubes I bought cheap on e-bay for I don't know what use, various headers, wallwarts, battery holders, tactile switches, SMD parts left over from min buys to support builds. Nozzles for hot air rework station. Various prototype and completed boards. And that's just recent stuff! I have boxes of old projects and TTL samples of stuff, boxes of cards a friend gave me that I haven't opened since we moved in. I'm gonna have to take a bunch of pictures when I find some room.

What's in your parts bins?

Valalvax: !!! the idea is to provide light, not signal intergalactic beings!

Can we merge this thread with the one about "what can I do with my new Arduino"?

I hadn't thought of that before. ;)

Crossroads, yeah I was wondering what the parts bins of the Edison/Tesla/Shannon/etc. members looked like, compared to most of us with more modest gear.

Your post reminds me of an incident when we lived in North Carolina. My wife sews quite, and when were down there, my wife worked at Piece Goods, which is like JoAnns is now. When she started there, I said in jest, that I expected at least 1/2 of her paycheck to come home in cash instead of fabric. :)

So anyway, one of the regular customer dies, and afterwards it came out that the woman owned two houses, one to live in, and one to store all of her fabrics and do sewing in. All of us who craft in one way or another get a farway look in our eyes, if we think about having that much space to expand into.

I should mention our daughter is trying to create a side line making jewelry, so you have my woodworking and electronics stuff, my wife's sewing stuff, and lots and lots of beads....

I just got some nRF24L01+ modules too, looking forward to playing with those.