Where to start with multiplexing? or bit addressing?

I believe in order to control large amounts of LEDS...

you need to 'multiplex'? or use shift registers (or something?)

Is there any BASIC tutorials or articles on getting into this?

I am 'not' looking for advanced articles.. where they throw out chip acronyms used..etc.. (as that would mean nothing to me)

simple parts lists.. and an overview of the topic and implementation wold be great!

Is there a limit of the number of LEDS you can individually control/address? (is this based on the shift register chip of choice?)

is multiplexing the 'word/verb' of this action? (driving multiple leds) and shift register is a physical component to be used 'in' multiplexing?

if I had say 3 leds I wanted to control with ONE pin.. where does one start? (I know you can use 3 separate pins....but wanted to use 3 leds to keep confusion low when talking about multiplexing on one pin)

also Im assuming that if one wanted to 'multiplex' with RGB leds..you would use 3 pwm pins..

Edit: Okay that may be a little more advanced then you may be looking for. I"ll keep looking

To understand the principals try this:- http://www.thebox.myzen.co.uk/Workshop/LED_Matrix.html

For a 4 by 4 example of an RGB Matrix look at this:- http://www.thebox.myzen.co.uk/Hardware/Mini_Monome.html

Finally for an 8 by 8 matrix try this:- http://www.thebox.myzen.co.uk/Hardware/Hexome.html It will also give you an indication of the amount of wiring involved.

check if the array needs updating

You can be smart about it, do a blink-without-delay loop, each pass thru loop see if your on time has elapsed, and if not check for other stuff that may have occurred and update the data array.

tanks for the replies..

before I started reading the links..

coupdl questions to make sure Im on the same/correct path..

1.) this would be more STRIP related than 'MATRIX/CUBE'.... (for the project/demo).. does that matter? same principle applies? 2.) I didnt see any mention of shift registers? and the comments mentioned using 8 x I/O pins from the Arduino? How do you save I/O pins and run.drive more leds from less/one pin?

the project/demo I had in mind is to play with an animated LED strip.. (well plain led strip..I want to animate it) LOL

Thanks again.. I'll check out links.. (and re-read what crossroads posted.. a few times!....lol)

1.) this would be more STRIP related than 'MATRIX/CUBE'.... (for the project/demo).. does that matter? same principle applies?

No, it is the same it dosn't matter how you physically arrange the LEDs.

I didnt see any mention of shift registers?

They are just one way of getting extra outputs, they are not essential.

Sorry don't know what you are on about here.

what if the LEDS used need/require more than only 8mA?

You use LED drivers, direct connection to a shift register is a bit babyish.

thanks for the reply..

not essential.. ifyou wanted to drive/have more leds that you have I/O pins available.. then needed yes? or are you saying you can add more leds on 1 i?o pin of the Arduino?

he mentions using 4 pins (each) for Anode and cathode

which essentially takes up 8 pins of the Arduino.. yes? giving me a total of only 16 leds though.. yes?

for each row or column.. there needs to be another I/O pin on the Arduino used.. correct?

So in this project/theory.. you would need to use a shift register chip....yes? (which Im not against... except now I read you called it babyish!) LOL..

which by that I think your saying not the best/most professional approach? (for actually driving/powering the leds?..how would you otherwise do it? with that many leds?) space IS a concern... would these drivers be needed for each led? or segment of led array?

sorry totally clueless about how one would go about wiring this all up?

these would be HB SMD leds.. (1206 footprint/package).... not sure yet though.. might just be an odd 4mm HB oval leds I have laying around too)

Im assuming this is way to much for the Arduino to handle by itself....and would require an 'shift register'...?

Are there other (small) shift register chips out there besides the: 74HC595 that only gives (I think) 8 outputs for leds?

It is connecting LEDs directly to a logic shift register which is a bit babyish.

A shift register is only one way of getting more output lines from an arduino. There are lots of others. A TLC5940 is another good chip for driving LEDs and there are plenty of similar ones.

Please explain what you mean by "animated LED strip"

Or this kind of thing? it would be option A

just a 'plain strip' of leds... that "I" animate myself through Arduino/code.

I suppose I would have to solder them myself...(make my own 'strip')

*Im not sure if just doing one long 'string' of leds would be the best... (since I need to basically make a 'circle').. 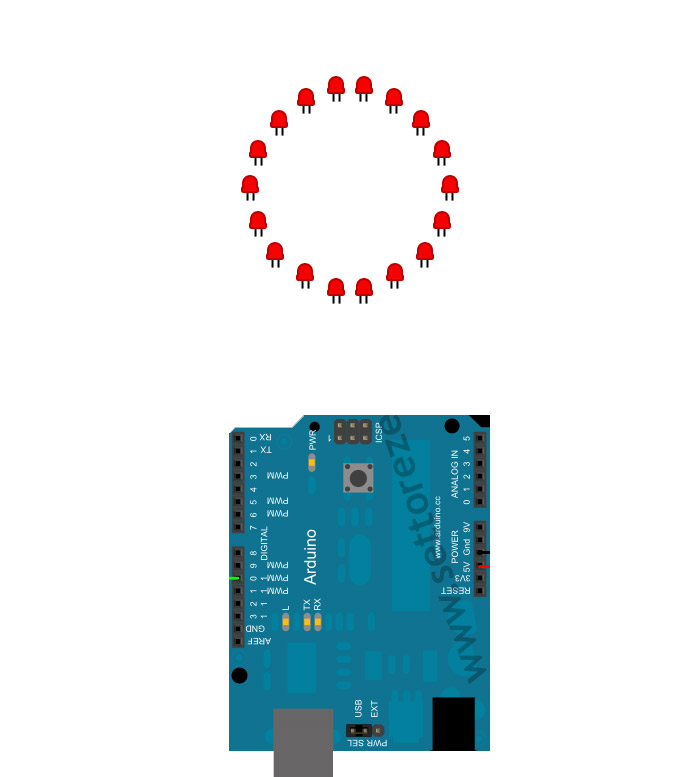 if I can target any led at any time.. shouldnt matter if I kept it all 1 long string/array? would it?

I dont have a clue on how to drive that many (external driver) but thats new to me more or less..(Grumpy Mike suggested something to look at I believe)

space is an issue as I'll be cramming this stuff into a mod'd toy more or less.. (in theory this is what Id be doing.. just talking about the stuff Id need to learn first!) lol

So you've got 18 LEDs, 20 I/O pins, space is tight: add 18 current limit resistors and drive them all directly.

Im hoping to NOT use all/most of my I/O pins..

so it leaves room to do extra 'activities'...etc..

(which is why I was asking about shift registers..or adding the support to individually control/target leds using only a few pins.. or daisy chaining these 'shift registers')

reading some of the links provided.. Im actually looking forward to trying to play with the 0001010110 style of turning on/off leds..

is that referred to as 'matrix style'?

is that referred to as ‘matrix style’?

No.
A matrix controls LEDs by columns and rows. This is just bit addressing.

ahh.. ok, so bit addressing is what I need to look into more..yes?

Anyone recommend or know of a good link to start reading up on this bit addressing?

Thanks Grumpy_Mike and CrossRoads-

the bitmath link was a nice read..

and thanks for the diagram CR.. (a bit over my head.. but looking at those schematics arent as scary as they used to be!.. used to be they were so 'busy' it was a HUGE turn off and very demotivating.. now I can sorta follow..just dont always understand hat is being done on some things or need verification on what a certain trace is going or what part is what)

I understand a 'driver' is just a board/chip that 'drives' the led(s) with the correct power.. right? nothing more? So that 'driver' linked above would be used only for supply enough power to my SMD leds.. (whatever the final count ends up being).. Id use or two of those chips..etc

however I still need to use/find a shift register.. (cause these are NOT the same..right?.. that driver chips can do shift register stuff?

I think Im still getting confused on the led strip.. vs a 'matrix' (which I understand uses columns/rows to target the specific led)

but Im missing a real world example to put it all together.. even on a small scale.

Would I search here for bit math? or bit addressing? to see others experiences before me? maybe seem some small diagrams/examples..etc

dang.. thats a serious schematic for a noob to take in! LOL

Max 7221 is a nice chip, I use it to drive eight 7-segment displays here. Has built in multiplex/control register. You do an SPI transfer to a byte, the 1's in that byte light up the matching LEDs.

Schematic is not tough - just 8 of the same thing. 3 control lines in, power, ground, couple of static lines, and the 8 LEDs. Don't let it get to you.

Here''s the '7219 & wiring to headers, parallel cable to the digit boards. Use a yellow highlighter to show what you have connected as you go.

The empty looking sockets on the middle board are the socket strips I used as headers. Got a duemilaove temporarily wired in here while waiting for a promini to arrive: