which USB to Serial

Hey, I want to program an ATMega385 or Tiny, stand alone and need guidance as to which USB to serial component is the correct one to purchase. Thanks

Use a. Arduino UNO.

The most popular chips are:

The most important thing when buying one of these adapters is to find one that has the DTR or CTS pins broken out. Those are used for the auto reset when uploading. You will definitely be sad if you have to manually reset every time because you bought an adapter that was $0.10 cheaper.

The other thing I insist on for the ones I buy is that it uses the standard "FTDI header" (even if it doesn't use the FTDI chip):

Some will have the DTR and CTS swapped, and that's fine because the two are used interchangeably by the Arduino. It's annoying how a lot of these adapters seem to be designed with whatever random pinout they felt like making at the time. I won't support that behavior when we already have a perfectly good standard.

A useful feature is to have the option of changing the voltage from 5 V to 3.3 V.

I want "the best" "most dependable" and I am not worried about the cost. as long as it gets the job done.. looking for a part number. arduino, adafruit, sparkfun, etc. just need it here so I can begin my project. who has the top of the line for boot loading and writing to a stand alone 328 or tiny 85 chip? not looking for surveys, just the best on the market. I have found that usually it's worth the little extra to just get the best available to begin with. too old to waste time worrying about a couple bucks

You need a Programmer to install the Bootloader and set the fuses.

The USB/Serial adapter does not do that.
I use these 2 a lot with mini-B connector

and
http://www.tinyosshop.com/index.php?route=product/product&filter_name=ftdi&filter_description=true&filter_sub_category=true&product_id=186
or this one more often with micro-B connector
http://www.tinyosshop.com/index.php?route=product/product&filter_name=ftdi&filter_description=true&filter_sub_category=true&product_id=600

For a Programmer, I use Atmel AVR ISP MKii, but you can't get them any more.
My Standalone Programmer, running Nick Gammon's programming sketch, does all kinds of parts, as seen in the code listing: 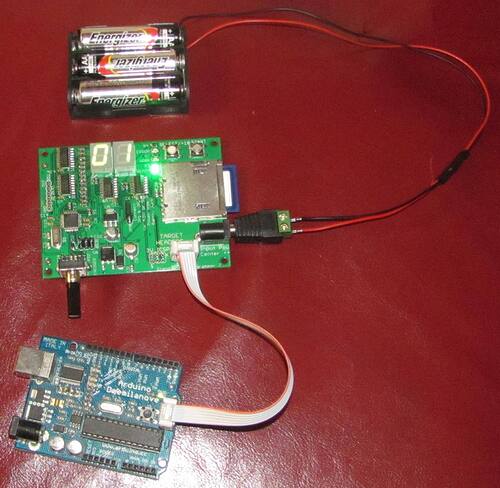 I don't like that Mikroelektronika one because of the non-standard pinout. I own one of those tinyos adapters (which does use the FTDI header pinout) but I never use it because of the female header on it. I prefer the male header on the adapter so I can plug it into a breadboard and I also put female FTDI headers on all my boards that need one so that a male USB-serial adapter works for everything.

I just always buy the cheapest FT232 adapter I can find on eBay or Aliexpress and have never had a problem other than having to install the hacked driver to deal with FTDI "bricking" them (they are counterfeits). Actually the only adapter I ever killed was a tinyos but that was the first one I ever bought so I'm sure it was my fault. I see this SparkFun one:

The CY7C65213 USB to UART serial breakout is designed to provide users with a means to access all available I/O pins on the IC, and to provide a 6-pin UART

which allows you to solder your preference of headers on but it's pretty annoying that their design forces you to cut/solder a jumper just to change from 5 V to 3.3 V.

The MIKROE483 is nice tho for installing on a board. The two sides of thru holes make it nice & solid when soldered down. I design my boards to be able to use either one.

The Female headers, it's easy to use some male-male pins to allow it to be used with female headers on a board.

CrossRoads:
The MIKROE483 is nice tho for installing on a board. The two sides of thru holes make it nice & solid when soldered down.

I hadn't considered that. It's definitely a bit awkward to have the long adapter board sticking up out of the board/breadboard with the USB cable sticking up off the adapter. Lots of leverage when it gets knocked around. I started using adapters for the Pro Minis so I was biased toward their programing header from the start. Still, the right angle layout is not conducive to breadboard use. A DIL format adapter would be kind of nice. That SparkFun board could be used that way but it would take up space on the breadboard for pins that most people don't need. I would prefer a smaller adapter that had only the necessary 3 pins on each side but I don't know if one exists.

thank you guys, I am rather new at this and didn't realize I think I can just use my uno and I guess the tutorials I was watching they just used the usb to serial for the rx tx. I'm reading up on it to get a better understanding.

You can actually use an Uno as both an ISP programmer and a USB to serial adapter. It's not very convenient for either but it will work fine.

You say you're not worried about cost so why not just buy a dedicated programmer and a dedicated USB to serial adapter? They're very useful tools if you're going to be working with bare chips. Even for the reputable brands the price is not bad (plus it's a good feeling to support someone like Crossroads or SparkFun that actually gives back to the community).

because I learn in my spare time by reading and videos and input from ya'll. I have a spark fun inventors kit and following directions is one thing if all the pieces are the same manufacture, etc..... like this issue. I built a stand alone atmega 328, crystal, caps, etc. it's supposed to be boot loaded already however it doesn't seem to be. if I had an "arduino" I could just follow the directions..... how ever I don't, they are similar of course but not identical. finding what I would call "cross over" info isn't always easy. that and the guys at the electronics store, well..........if it's analog, they'll talk all day long. if it's "new stuff" LOL we're all pretty old!