Arduino controlls 2 servos for 2 axis movement - tilting "left/right" and "forward/back".
The max/min constrain is set to +/-15° from "flat position" (as in picture).

Now I'm trying to make an estimation for a large scale project. The facts I know about the surface (presented by the pink paper) are:

Although having a small (and apparently forgotten) backround knowledge in engineering I'm lost in torque, momentum, impulse, acceleration calculations.

Could anyone please explain or give hints for the formulare for calculating servo parameters?
Maybe someone has dealt with moving heavy things with servos, could share the experience and even recommend speciffic arduino friendly servos?

Many thanks in advance!

Thanks for the response.

The load is evenly distributed - it is a circular plane made of material X and weights 30kg. Nothing more.

just in a circular form factor. And the ball that moves as the surface tilts weights close to nothing.

What do You mean by "complicates things"?

I know I would have to rise the surface above the servos, so I won't get any clash by rotating it +/-15°. Plus, putting it in the center gives me the smallest (q*l^2)/2 on the servo.

Fastness - the faster the better. Not expecting small servo speed, and even if the servo supplied that, I'd have to slow it down to deal with inertia that such heavy plane would create. Hmm 1.5..2sec for 60°
Resolution - .5 - 1° 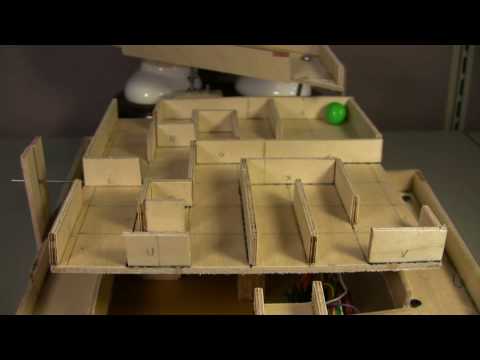 Heh, that was exactly the first thing I thought of - a center pivot, and linear actuators on the edge. I proposed this solution, however due to the nature of how the plane is intended to be displayed mechanisms "on the sides" are not welcomed.
Plus the edge of the r=1.5m circle, when moved at +/-15° angle, would have a vertical movement range of 2* (1.5 * sin(15)) = 80 cm.
Need to rethink strategy But strong enough centre servos would be solution.

This looks like a job for stepper motors in my opinion.

If you are anchored in the bottom middle, and tilting from there, wouldn't you tend to "accelerate" the ball rolling in the wrong direction when you start to recover from a tilt?

KE7GKP:
Even if you can position the actuators at 1/2 the radius, you can significantly reduce the force you need to get that kind of movement.

tastewar:
If you are anchored in the bottom middle, and tilting from there, wouldn't you tend to "accelerate" the ball rolling in the wrong direction when you start to recover from a tilt?

right. but defect often becomes effect, or here - characteristic of the game

Remenber that torque is a function of weight and distance, so shop for servos that can hold more than 120Kgs..

I'd look into using a couple of 12 or 24 VDC linear actuators (with potentiometer position feedback), something with 4-8 cm stroke length would probably be ideal - they'll easily handle your mass requirements. Mount the bearing point on a ball/socket universal joint of sorts, and arrange the two actuators 90 degrees apart around the bearing post, using more ball and socket joints (you could probably use steering/suspension parts from a small car or quadcycle for this). The actuators won't be cheap (probably around $100.00 USD new, maybe a bit more). You'll also need, of course, heavy-duty high-current h-bridge drivers for each actuator. An Arduino can control these, and use the potentiometers via the ADC inputs to measure position - in effect, you'd be building a servo and you'd need some custom control software (window comparator is simplest method - essentially nearly the same as a real servo; PID could also be used, but is more difficult to tune).

If you make a balanced two axis table (gimbled) supported by bearings, then the servos probably could do the job. A project below that might be of interest.

instead of 2 linear actuators and a pivot, what about 3 or 4 servos/actuators working together.

look at the swashplate mixing on model helicopters to see what I mean.

attached image is a 3 servo setup in whats called 120 deg mixing, or 3 servos evenly spaced from each other 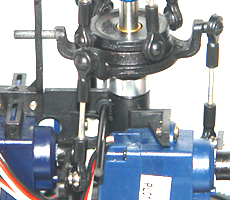 The moment of inertia for a 1.5m disc weighing 30kg is going to be quite a bit higher than the 5g cardboard square in your demo. It will take a lot of force to accelerate and decelerate all that mass at speeds that make it keep up with how a person can fidget around an iPad. You should put some thought into just how responsive it has to be -- would it be okay if a full excursion movement took 1,000ms? 100ms? This would help guide your thinking about how fast you need to accelerate it, and how much power and speed you will need to do that.

A home-made threaded-rod actuator could develop enough force, but you might have a hard time making it move fast enough.

I would work hard to get the weight of the final disc down as much as possible. It should be possible to get the weight down to 5kg or even less. Maybe use laminated foam instead of MDF and that sort of thing.