Will an LED blink if noone is looking?

I have a baffling conundrum. I've set up a breadboard with an ATtiny13A on it and successfully sent a .hex file to it through AVRdude and an Arduino-as-ISP. The C program does nothing but set pin 5 (PORTB0) as output, set it high, wait two seconds, set it low, wait two seconds, and loop. A long blink, basically. To make it interesting, I'm using a bi-color LED of the 2-lead inverse parallel variety. I set up a voltage divider between +5v and Gnd using a pair of 1K resistors. One lead of the LED goes there, the other to pin 5 on the ATt13. The idea, of course, is that when pin 5 is high, the LED will glow green, and when it's low, it'll glow red.

Here's the problem... left on its own, the LED is mostly off. It may blink erratically, or flicker as if on PWM with a very, very low duty cycle. Mostly it just looks like it's not lit at all. BUT, when I stick the black probe of my DMM on ground, and the red probe on pin 5, suddenly I get my green/red blinking just as expected. Interestingly, when I remove the probes, it turns off again. Probing again starts the cycle over, but appears to reset the AVR. It's like the probes are allowing the AVR to come out of BOD, or serving as a reset pull-up.

Of course, there's a 10K resistor from pin 1 to +5 (reset high), Vcc to +5, Gnd to Gnd, pin 5 to the LED, LED to the center of the voltage divider. The breadboard is being fed by an Uno attached via USB to my laptop. I haven't tried with a wall-wart directly, so I guess that's the next step.

Can you post a photo of it, the schematics and the source code and a link to the led ?

At first glance it seems that the input is open. With the probes, you have a high impedance from the measured pin to ground or you introduce noise. In that case the led lights up.
At second thought, a voltage divider of 5V makes 2.5V. That voltage could be too low for the led.

whats the point of the voltage divider, and whats keeping the led's from sucking whatever they want in terms of current?

Here’s the code. Note, this is AVR C for use in Atmel Studio. The intended application is simplistic enough that bringing in the whole Arduino kit doesn’t make much sense for this project. 64 bytes of SRAM and all…

Here’s a Fritzing snap of the breadboard layout. Powered from the 5v/Gnd pins on an Arduino. 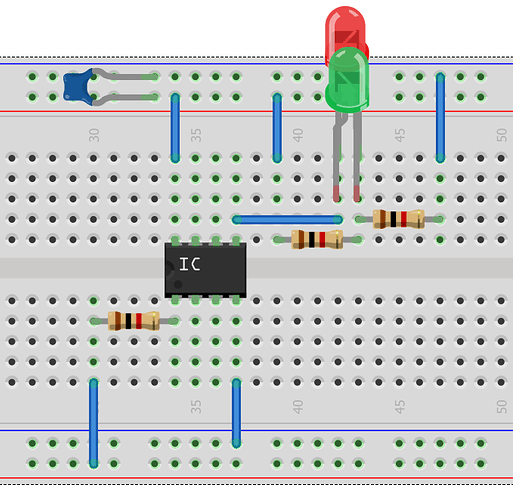 So, this is more or less solved in the immediate sense, but I still can't explain what happened.

Maybe it would be a good idea to find out....

Sounds to me like a bad bread board connection that you were making good by the pushing of the probes onto it. Nothing to do with the electrical effect of the meter.

so theres nothing from keeping the led from sucking current, possiblally (doubtfull though) resetting your IC

A pin on an arduino will equally source or sink current. As long as you keep it to the limits of the pin then it has no untoward effect.

Well, the only thing limiting the current to the LED would be the 1K resistors to the +5 and Gnd rails. The divider creates a 2.5v tap with 1K of resistance either direction. That sounds current-limited to me.

I'm still at a loss for why the probing caused things to change. For that matter, even on the "actual" project breadboard where things otherwise seemed to work just fine, sometimes just touching (only) the black probe to Gnd would cause the uC to reset. Not always, just sometimes.

I'm honestly not sure how "clean" the power is from my little 3-voltage wall-wart supply. It appears to have its own capacitance because all the LEDs on my project fade out when it's unplugged, but for no reason in particular, I didn't put any large electrolytics on this project board like I usually do. There are ceramic caps on the supply pins though. I don't suspect loose connections per se, since it doesn't appear to mind being jiggled or touched.

Thanks for the brainstorming, everyone. This one might remain a mystery though. Well, just for fun, here's a pic of the project board. Everybody loves gratuitous breadboard pics, right? The Tiny is the top right IC next to the single green LED. 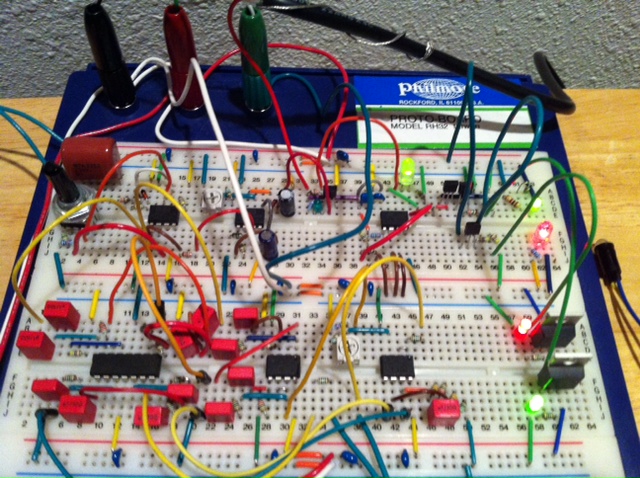 sometimes just touching (only) the black probe to Gnd would cause the uC to reset. Not always, just sometimes.

That suggest it is a mechanical problem rather than an electrical one.

Whilest I hate bread board that one is quite neat, well done.

Osgeld:
so theres nothing from keeping the led from sucking current, possiblally (doubtfull though) resetting your IC

Nothing ... apart from the 1K resistors.

One thing I noticed in calculating the voltage you use 5v, then you say it is powered by a 3v wallwort. What voltage are you getting on the board with the circuit set up?