I've been having nothing but troubles here.

I first did a basic load of the arduino app and asked it to load the drivers. I got a usb device not recognized but moved past the error.

On using the app for the first time, I didn't see my port connected.

Looking at the drivers in my devices showed an error so I tried to manually install the driver from the device manager. I get the following error when using the "have disk" option and pointing to the drivers/arduino.ini file

Further googling shows there are problems with the certification of the disk and gives a workaround. I noted that the first time I tried this, the device showed up twice in the device manager; once under usb devices - unknown and a second time under other - unknown. This is important for later. The workaround says to manually update the driver for the other-unknown and say 'choose from loaded drivers or something' and click the "ports" driver type and select the arduino.

I tried this and it kind of tried to work but had some failures.

Here is where I am now screwed... Retrying this, I only see the unknown device in the usb-unknown section. NOT in the other-unknown. Manually trying to install it via the workaround doesn't let me change to a 'port' type install. It seems the device is permanently set to a 'usb type' and the arduino company doesn't show in the list.

Anyone have ideas to get past this?

Have you clicked on the USB device in the device manager and selecting updated the driver, pointing to - C:\Program Files (x86)\arduino-1.0.6\drivers - (or your folder on your computer) then press enter?

I see the "which board are you using?" question is a common first follow-up post so I can update my problem with:

LarryD:
Have you clicked on the USB device in the device manager and selecting updated the driver, pointing to - C:\Program Files (x86)\arduino-1.0.6\drivers - (or your folder on your computer) then press enter?

Yes, this is what gives the error saying it isn't compatible with Win7x64.

here is the error when manually loading the driver

This is what I have in the folder: 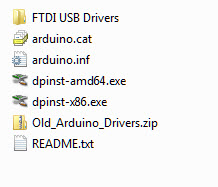 I have those exact files too.

But when I try to update the driver, it tells me that it isn't compatible with Win7x64. A lot of internet research says that the reason is that it isn't a signed driver.

Are you on Win7x64 and have successfully loaded that driver with a standard windows driver update?

The procedure you went through I did yesterday and things worked on my 64 windows 7.
Maybe try to re install everything.

LarryD:
The procedure you went through I did yesterday and things worked on my 64 windows 7.
Maybe try to re install everything.

Which step was successful, did you have to use the worakround of selecting the other-unknown and searching the list for Arduino? Or was a simple install from file enough?

The problem is that I CANT just do it again. The unknown device is now only listed in the USB section, not the other section.

Now when I say "select driver from list" it only shows me USB items. That step in the workaround that says "select type port" is not available to me.

Here are the exact screen shots:

When I try to load this driver in the device manager by saying "I Have Disk" and browsing to the folder, I get the noted error:

I then saw instructions about saying something like "select it from the list" rather than "I have disk". My first try had the device listed under both "other-unknown" and "usb-unknown" and it kind of sort of worked but not quite.

Now I only have it in usb-unknown and this is what happens when I try to select from list:

Note in this last image, because it thinks it is a usb type, it does not allow me to select "port" type which is where the arduino is listed. 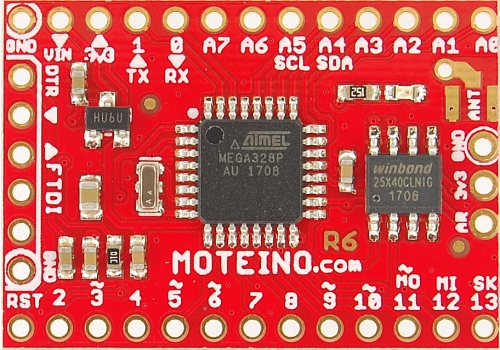 What sort of USB to serial converter have you got, and can you post a link to that please?

Unless of course you got the one with an FTDI chip on it, in which case... have you tried the latest drivers from the FTDI website?

ChilliTronix:
Unless of course you got the one with an FTDI chip on it, in which case... have you tried the latest drivers from the FTDI website?

Yes, it has the FT232RL FTDI chip on it http://lowpowerlab.com/moteino/#whatisitUSB . Yes, I downloaded the FTDI VCOM driver from their web site.

Figured this site would go dark on me as soon as I mentioned I didn't buy a board from here.

Is that the one on the board, or is that on a separate controller bought from somewhere else?

On the board. The USB-Moteino has the on-board chip.

OK, so, have you tried the latest FTDI drivers from their website?

OK, in device manager have you done update driver, then have disk?

Have you checked the USB IDs to confirm it is not suffering from the fake FT232RL issue?