This weekend, I saw a painting in an exhibition, which has some strange writings on it. I was thinking it’s they are just some meaningless. Later when I saw the artist is Xu Bing, then I start to understand what it means 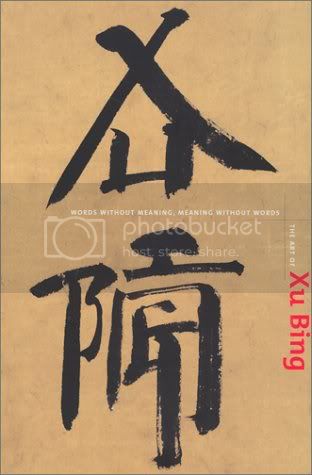 I can’t tell if your a spammer or not… please confirm/deny my suspicion.

Doesn't seem to be from other posts...
http://www.arduino.cc/cgi-bin/yabb2/YaBB.pl?action=usersrecentposts;username=bigtrumpet

But this post definately seems out of place. big trumpet, what's the deal?

I can read chinese ;D
Pretty funny! You just need to look.

Oh, you mean that it’s just his name in english? Just noticed that too.

Well, I thought this is a afterwork pub area?

If you understand what the artist tries to convey, ( or plays with), then you’ll find it’s funny. If not, they just a bunch of meaningless icons.

See who can decrypt it first

His name is actually Xu Bing