Would this voltage regulator work?

I am making a clock that all the hands will be controlled by small 9g servos. There will be somewhere between 7-10 total, still finalizing the design. From what I've read the 9g servos take somewhere between 250-750mA so I'm guessing this voltage regulator would work http://search.digikey.com/scripts/DkSearch/dksus.dll?Detail&name=LM1084IT-5.0-ND. Am I guessing right? Also if I get a wall wart that supplies enough amps could I just wire up the arduino's regulator and that one in parallel off the same wall wart? The servos would only be actuated at the same time when the clock is powered on or when a month rolls over, so I don't think I'll need a heatsink, but I'll test that once I get the parts in. Thanks for the help, I'm new to the electronics side of developing stuff.

Two key elements are input voltage and heat. The regulator you picked is a linear regulator which means it dissipates excess energy (from the input voltage to the output voltage as heat). With 10 servos drawing 750mA (let's do some worst-case design) you're going to be drawing 7.5A from the power supply. Now, that's already way beyond the specs of the LM1084. Even if doing a best-case design, 7 servos at 250mA each, that's 1.75A. Multiply this current by the input-output difference in voltage of the LM1084 and you have its heat dissipation. Suppose you use a 9V wall wart, that's (9V - 5V) * 1.75A = 7W. You are going to need a good heat sink to keep the LM1084 cool enough to be usable! A 7V wall wart would be better: half the power dissipation.

I am making a clock that all the hands will be controlled by small 9g servos.

before dealing with power issues, are these 'modified' servos for continous rotation, or standard servos with <= 180 degree travel?

These are standard servos with 180 degree rotation. the clock is going to have at least month, day, hour, minute, second, moon phase, and some way to display sunrise/sunset (still working on how I want to display that). I was just hoping the LM1084 would be ok because above about 5 amps the voltage regulators get a bit more expensive. So I should go with something like this http://search.digikey.com/scripts/DkSearch/dksus.dll?Detail&name=LT1083CP-5%23PBF-ND to be safe?

No, for that money you're better off getting a switching regulator module. I'd look at something like this: 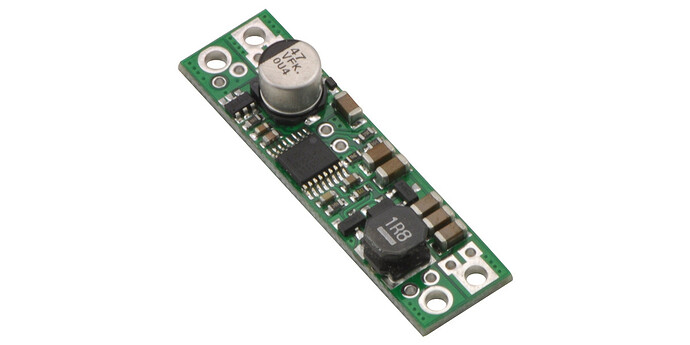 The compact (1.68"×0.46") D15V35F5S3 switching step-down (or buck) voltage regulator takes an input voltage between 4.5 V and 24 V and efficiently reduces it to a lower, user-selectable voltage. The selectable output voltages are 5 V...

Same price, a lot less worries about heat and heatsinking.

just hoping the LM1084 would be ok because above about 5 amps the voltage regulators get a bit more expensive.

Understood. But as RC posted, a regulator's current capacity is dependent also on it's heat dissipation and without a heatsink you can never reach a devices maximum rated current.

That's up to you and your expertise. If you're OK making aluminum heatsink slabs you can probably make the cheaper regulators handle 7W. Some people on this forum would consider a roll-your-own heatsink to be child's play while others wouldn't even know where to start. You can also buy heatsinks but something to let you handle 7W would be expensive anyways.

You could also experiment with putting regulators in parallel to distribute the heat. They won't share the load equally but it should help a bit. There was just a thread about this recently:

I'm powering a router, two webcams and a GPS unit, all working off of 5V for a total of 1.3Amps (input is 12V to the regulators). I have two L7805C-V voltage regulators . The L7805C-V regulators are rated up to 1.5Amps each with proper heat sinking....

Or would it be more reliable/easier just to go with the switching regulator?

I'm a big fan of the modern switching regulators and modules. Anytime you can decrease heat dissipation and increase operating efficiency (same thing really) without paying too much of a cost premium you should consider it. It's especially important for portable battery powered projects.

I think I'll end up going with the switching regulator then, it will probably be enclosed so heat may be an issue. Thanks again.