Well,
I wanted to build myself an Ambilight Background for my Monitor using:

-Arduino Nano
-WS2812 12V Addressable LED Strip
-12V Power Supply (for now a battery, because the LED Strip needs more Power than expected)
-Bambilight by MrBoe ( GitHub - MrBoe/Bambilight: A simple implementation to send the colors from a Windows-PC-Screen to a LED-Strip over Arduino. Maybe some people would call it "Ambilight" ;) )

I connected everything according to the Tutorials, but the LEDs don't light up.
The FastLED Library is installed and the sketch is uploaded (Port/Boardtype/etc. should be right).
I checked the Voltage at the battery and at the end of the strip and 12V are supplied.

If anybody got an idea, I'd be glad 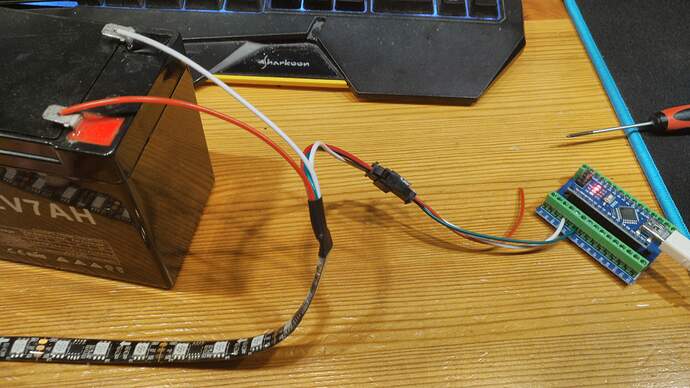 No that is not a WS2812 LED strip.
So you are probably not using the right option in the libiary.

Also:-
That strip can only control LEDs in groups of 3.
No resistor in the data line.
No capacitor across the supply.

I should complain to them because it is not what is advertised. I can't tell from the photographs but look at the black 6 lead IC and see if you can read a number off it.

Okay thanks a lot,
I ordered a WS2812B strip from Amazon and it is working fine.