Yet another "Progamming Error"w/new sparkfun board

Last week I purchased an arduino board from sparkfun and I have not been able to get it to work as every time I try to upload something to it, I always get a programming error and the led never lights up even after reseting. I know I connected led correct, ( long lead of the LED in pin13 and the shorter lead in the hole labeled GND) and it is a standard led that works fine, 3.3v(or something like that)

I tried on two comupters (both windows XP) and no matter what I always get the same error, "programmer not responding; reset the board before exporting." I have tried reseting the board and that does nothing as well. I have also looked at similar problems that people had on this fourm, but that did not help either.
When I connect to the computer, green light always lights up, and the link light (orange) keeps blinking, the 2 rx and tx lights never light up except in the beginning when you connect the board.

I have the newest arduino program (arduino-0006) and installed all the nessasary drivers, (FTDI USB Drivers and keyspan) and when I connect to computer, program recognizes board.

I think that perhaps it is defective, as I just bought this brand new from Spark Fun and everything should be working fine.....

I would greatly appreciate someone help me with this!!!
Thanks!
I can not wait to start using arduino, as I think, when working, this is an awesome device despite the problems I am having now!

Here are some pictures: 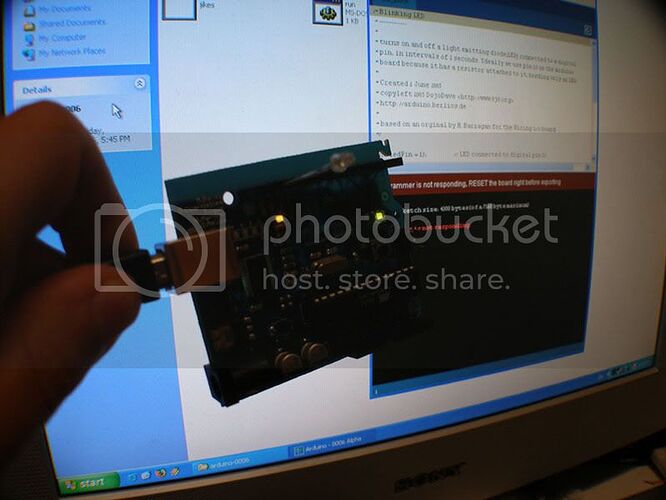 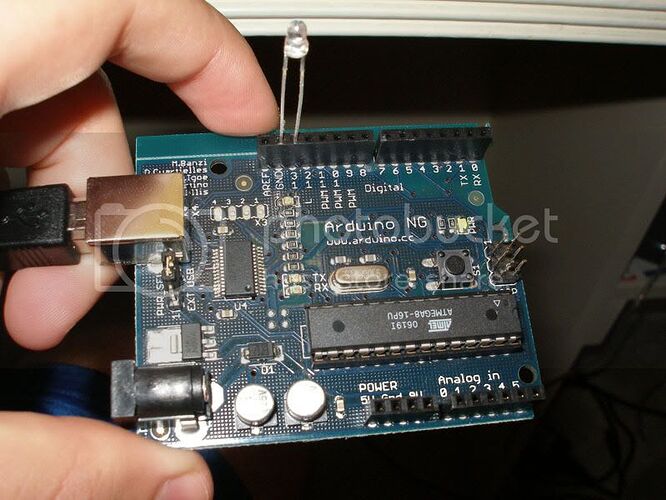 Are you resetting the board just before pressing the upload button? Did you select the right item in the Tools | Serial Port menu (it should be the com port described as a "USB-serial device" in the Windows Device Mananger in the System control panel)? Are you running other software that may be using or blocking access to the serial port (e.g. a firewall, a PDA sync program, etc)?

I got it to upload. ;D I think when I was doing it the other times, I waited for the light to turn back on or I did it immeditly after before I pressed upload, and this time today I did it after the link light was off for 1-2 seconds.

I still however cant get the led to link up.
Once you upload the blinking led project, is it suppost to start blinking while connected to the computer, or will it work only when off the usb cable and powered by an external power supply?? 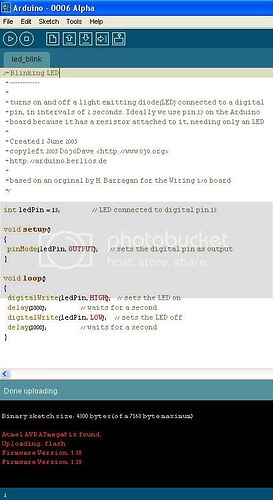 Once you upload the blinking led project, is it suppost to start blinking while connected to the computer, or will it work only when off the usb cable and powered by an external power supply??

yup-- after the Arduino has booted, and assuming you've uploaded the LED blin sketch, as you have, it should blink while powered up, either from the USB or from a battery or external power supply. Try swapping the current LED with another one, to start.

You don't need to connect an external LED to the Arduino board, here already is one on pin13. Remove that external LED and it will work. On one of your pics that LED is already on!
Then change the code to use another pin and try it again, but this time don't forget to use a resistor!

yes evidently we haven't got the nice new boards with the built-in LED up here in the old country!

What I was originally wanting to do with arduino, was to control my robot from the computer using leds. From the computer, I would press the command I want it to do and then it lights up leds and then the leds are right next to light dependent resistors and once the certain leds light up it will do the desired action. (I have absolutly no experience in this sort of stuff, so that was pretty much the only way I could think of that would actually work! 8-))

Anyways, I am wondering, how would it be possible to control arduino, directly from the computer in real time? I saw on the arduino playground site, a project that lets you control arduino from flash, I am going to most likely be controlling it from there.

I'm going to go read more and learn more about controlling it directly via computer, and see what I can learn and find! 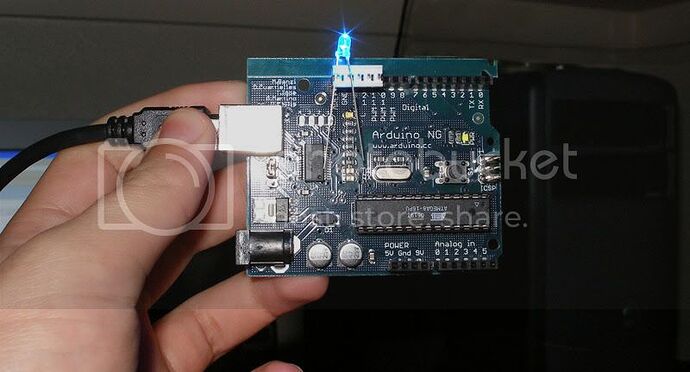 Another update,
I went to the site from the playground, that tells you about live communication between board and flash and there is a nice step by step guide, and it works fine. btw for anyone who might need it, the site is: Arduino code&examples - by b of Progetto25zero1
Now I am going to try and get it to turn on and off leds. I cant find any information about it but perhaps I can figure out a way!

There are heaps of sketches out there for controlling external components using Arduino. When you talk about using an LED and an LDR right next to each other, that's called an optoisolator, and you can buy chips that have the LED and LDR in one package, so it's a lot more dependable. Are you sure you need to do this for your application though? Could you just hook up the arduino directly to where your LDR's would go?

Here is one sketch I wrote that I thought you might find useful. Using the arduino serial monitor, you send a two digit number and it lights up the corresponding LED - eg type "07" and hit send/enter and the LED connected between pins 7 and gnd lights up, and whichever LED was previously lit up turns off. You could easily adapt it to turn on an LED without turning off others, and visa versa.