I want to try out the arduino ShiftOut tutorial (I can't post links yet) because I want to use around 50 or so RGB LEDs on one duemilanove (I know it's a lot...is it possible?). Could anyone point me to any info explaining what the numbers in these chips mean? In the tutorial it says to use a 74HC595 3-8 line decoder. Sparkfun sells a 74HC238 and I just ordered a sample from fairchild of MM74HCT138N. But they are all 3-8 line decoders, all appear to be CMOS and they all have that 74HC in them. What is the difference? Would I be able to run that tutorial with the chips I ordered?

Thanks so much for any help!

point me to any info explaining what the numbers in these chips mean? 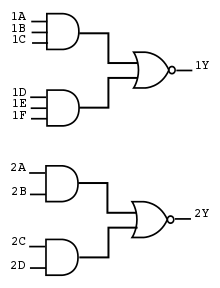 The following is a list of 7400-series digital logic integrated circuits. In the mid-1960s, the original 7400-series integrated circuits were introduced by Texas Instruments with the prefix "SN" to create the name SN74xx. Due to the popularity of these parts, other manufacturers released pin-to-pin compatible logic devices and kept the 7400 sequence number as an aid to identification of compatible parts. However, other manufacturers use different prefixes and suffixes on their part numbers.

Would I be able to run that tutorial with the chips I ordered?

The 74HC595 is a 8 bit serial in parallel out shitregister. It will give you extra digital outs. These are good for controlling LED's if you only need to turn the LEDs on / off.

If you need to control the intensity of each of the colors in the LED's (to get mixed colors) this is not a good way to do it. It is better to use an IC that gives you PWM control. It is possible to implement PWM control in software using shiftregisters but it is not easy and you will loose some of the LED's brigthness.

Wow thanks for the quick replies! So I'm curious...what are those chips I ordered (the MM74HCT138N)? Is there anything I could do with them? (it's okay they were just free samples) On the wikipedia entry for 138 it says "3 to 8-line Decoder/Demultiplexer" (no idea what the MM means also) and the 595 is "Serial-in Shift register with Output Latches." I don't actually know what any of that means...the 238 on sparkfun says it's "1-of-8 Decoder/Demultiplexer, Active High Outputs." Could I run that ShiftOut (http://www.arduino.cc/en/Tutorial/ShiftOut) tutorial with the chip from Sparkfun?

I'm not looking to do any PWM quite yet...just want some DIP packaged chips I can slap on a breadboards...

Thanks so much again for any help...

Could I run that ShiftOut (http://www.arduino.cc/en/Tutorial/ShiftOut) tutorial with the chip from Sparkfun?

No, a shift register is a set of boxes connected together, you put something (a zero or one) in the first box and hit the clock input and all the boxes shift up by one place.
Read this:-

A shift register is a type of digital circuit using a cascade of flip-flops where the output of one flip-flop is connected to the input of the next. They share a single clock signal, which causes the data stored in the system to shift from one location to the next. By connecting the last flip-flop back to the first, the data can cycle within the shifters for extended periods, and in this form they were used as a form of computer memory. In this role they are very similar to the earlier delay-line...

Decoder may refer to: