Does anyone have advice on interfacing a loadcell with Arduino? If so what loadcell was used and where can it be obtained?
Mactitan.

I'm working on a weighing device, which will work in a similar way to a load cell. Try searching the forums for "strain gauge". I got the strain gauge bridge out of a set of inexpensive kitchen scales (Tesco's, £10). Some photos of the disassembly are here: 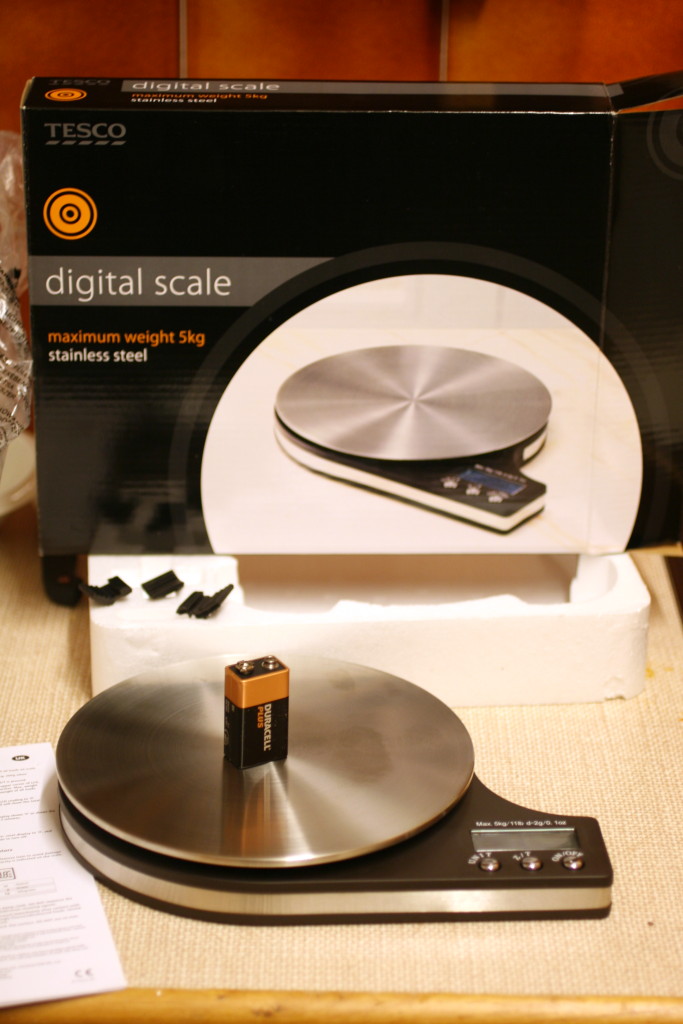 Thank you. I wonder if a cheap electronic bathroom scale will have the same loadcell or strain guage?

I opened up my bathroom scales, and they did have a similar beam with bridge-connected strain gauges. But they also had a complicated mechanical arrangement to take the load from the user any convey it to the beam. Plus, there was a sort of "mechanical advantage" thing going on, using classical principles of leverage to reduce the force on the sensor beam.

Thank you for the reply, Anachrocomputer.
Looks like I will have to look for a kitchen scale with a LC. We don't have Tesco in Canada, however I am sure Wal-Mart will have something.

For amplifier i use this:
http://home.people.net.au/~aircommand/day67.htm#circuitdiagram

I have heard that these guys are good, i got mine from
ebay.

I have a Omerga engineering load cell (0-20lbs). It has a 4 wire bridge output. You wire a positive voltage and ground (5-10vdc) to two of the wires and the other two wires generate a DC millivolt output voltage (2mv/v) meaning if using a 5vdc voltage source the bridge output range would be 0-10 millivolts. This would have to be amplified by an op amp to be useful to the Arduino A/D inputs.

Thank you for the super info. I will post my progress once I get the hardware setup.
Regards
mactitan

I have just made a small project using this ic to interface to the analoginput of the Arduino board.
The ina125p is very very easy to work with, and can be used in many different configuration.
Just add one component: A resistor to set gain.

I have tryed to make a small page about the project:

Good luck with yours.

Do load cells suffer from any form of drift? If I was to put a 20Kg weight onto a bathroom scales and come back in a year (assuming infinite battery life) would the scales still be reading 20Kg? I have an application where the weigh would be altering slowly and have long periods of no weight change at all. I don't need fantastic accuracy but would need no drift or very little so that in the periods of inactivity the reading won't change much between viewings.
I'm thinking there wouldn't be significant drift as these things are pretty linear and repeatability is high but most bathroom and kitchen scales require you to zero them before each use and whilst that maybe due to you moving it around I'm wondering if there is anything else going on.

If you use elastic propertys of materials to support the load and allow measurable movement, then there will probably be some non recoverable deformation over time when left under load. You might want to look at setups that don't depend on material deformation to generate a measurable change.

Kind of depends on the quality of the specific load cell, the better ones have pretty good repeatablity and one reason they can be so costly. However a good design would utilize a software 'tare weight' function that would 'zero' out any calibration drift and is also useful for factoring out a container's weight when you just want to know the weight of the material you place or pour into the container. Tare compensation is easy to do in software.

Tare compensation is easy to do in software.

That's correct, but the difficult part in this instance is to determine what would be the appropriate compensation to apply in this DIY setup. If commercial load cells are used, then they may have performance data sheets available for calibration based on time/load variables without "re-zeroing" (doubtful).

If commercial load cells are used, then they may have performance data sheets available for calibration based on time/load variables without "re-zeroing" (doubtful).

When I was working in a oil refinery we had many expensive load cell applications installations, from several high end suppliers. We always had to calibrate (both zero and gain) periodically using traceable calibration weights (certified weights in grams up to 50 pound weights). This commerical equipment always came with internal calibration adjustments and procedures. For internal use we would calibrate yearly, but for custody transfer use (meaning real money changes hand

we would do it more often. Analog instrumentation electronics should always have a calibration requirement that needs to be evaluated for every specific application. But then again how many of us check/verify the calibration of our personal test equipment, DMM, signal generators, scopes, etc.

PS: I wonder if drug dealers calibrate their scales?

Thanks for your responses. I can see that if you use springs for example to stabilise a platform that is then connected to a load cell the change in the springs over time would alter the reading. How likely is this if the platform is directly resting on the load cell i.e. no mechanism to transmit load or stabilise just a load cell? I also appreciate that even with an expensive load cell you are still deforming something to be able to measure it. Using a tare function is what the normal kitchen or bathroom scales use but I'm not sure how I could do this without removing the weight (which isn't an option for me). I could incorporate some sort of mechanism that retracted the load cell every now and then to reset the zero but this would of course increase the complexity of the project considerably. Any ideas on what sort of magnitude I'd be looking at with drift? I'd be measuring say 50 Kg on a load cell out of a bathroom scales, what drift would I expect over 6 months? I'm not really too concerned about anything up to about 500 grams but a kilo would be a problem. Thanks again fellas.

As for drug dealers. If I was going to buy somethign for a few K per gram I'd certainly be calibrating. :-X

Any ideas on what sort of magnitude I'd be looking at with drift? I'd be measuring say 50 Kg on a load cell out of a bathroom scales, what drift would I expect over 6 months? I'm not really too concerned about anything up to about 500 grams but a kilo would be a problem. Thanks again fellas.

I have no way to speculate on how much calibration drift you might experience for your specific design/environment. However having been in instrumentation for a long time I can only say there is always drift and inaccuracies to some varying degree. For instance will the scale be used is a temperature controlled environment? If not mechanical things expand/compress with temperature changes and any stress change in a load cell is bound to contribute to some drift. Also the voltage reference used in your electronics has a drift value and how much that effects your final measurement is another area for investigation.

About the only thing I can suggest is that when the device is completed you start a validation (not the same as calibration) check, say weekly. Take some weight that is near the top of range for your device and measure it when you first implement your device. Mark the weight on the device and then check it's measurement weight once a week or monthly. As long as the measurement is + or - within your own defined requirements, then just log the reading in a Leger. If it drifts output side your requirements you will have to take it out of service and recalibrate it.

By the way 500 grams over 50kg is a 1 percent accuracy requirement, no?
Lefty

Well then of course it wouldn't be illegal would it?

Actually California will have a ballot initiative this November on making grass legal and taxing it, we already have medical use grass laws. Polls are showing close to 50/50 at this time. Of course even if passed I'm sure the federal government would have a fit and try and stop it's implementation. We do live in interesting times.

Yep 500 in 50000 = 1% and really looking at it like that I could actually go a bit more. I have sort of conceded to the fact that I will have to do a test to actually see what my set up does over time but of course that means waiting around for time to pass. No temperature controlled environment for me this will be outside under cover. At least as I'm in the UK I can almost guarantee it will be a damp environment :). As for the Vref I don't think this is so much of a problem as it's not accumulative and any error will be there from the first reading so can be catered for. I suppose even temperature fluctuations would be a fairly simple thing to compensate for in software and a thermocouple once the relationship is known and again it shouldn't be accumulative over time. A thought that's just gone through my head is using one load cell as a reference to the other. If these things are linear then having two side by side, one with a constant known weight on and the other doing the actual measuring then any temperature compensations can be done by comparison. Could one be put upside down on top of the other and measure the sum which should always be zero, anything higher then that will indicate a level of fault (not sure it helps though).

I'm sure you will do fine because you are aware of the possible variables involved. Solving problems often is not as hard as troubleshooting and finding the root causes are.