Hi,
I have been trying to compile RadioHead send example but I am getting many errors(
error: 'uint8_t' does not name a type).
It seems like there is a bug in the new RadioHead.

I found in my downloads an older version RadioHead-1.84 which does not give me those errors(ofcourse i removed the serial.begin etc) but many other errors. Some of them are:

C:\Program Files (x86)\Arduino\hardware\arduino\avr\libraries\SPI\src/SPI.h:146:16: error: 'SPE' was not declared in this scope

C:\Program Files (x86)\Arduino\hardware\arduino\avr\libraries\SPI\src/SPI.h:217:14: error: 'SPSR' was not declared in this scope

I can't imagine why including the SPI library would be required. Try taking out that line.

VirtualWire works fine and is much smaller than RadioHead, so it actually fits into the ATtiny with room to spare.

Thanks. I will check it. I have a syn115 transmitter and 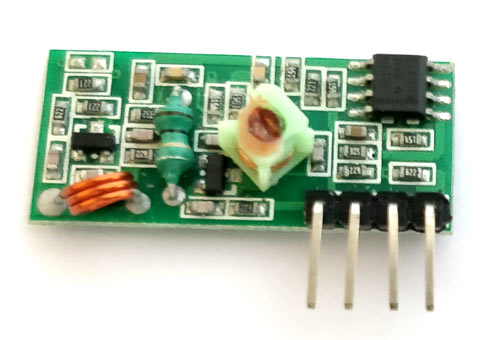 Are those two compatible or they both have to be sold as pair or "same brand"? Thank you

That is a generic ASK/OOK 433 MHz receiver and will pick up any signals around 433 MHz.

To get any range at all, you will need a 17 cm straight wire as an antenna on both the transmitter and receiver.

Hi. I tested this receiver with the transmitter that I bought it as pair. It works. With same code(radiohead libraries) the receiver does not pick anything when transmitter is the f115/syn115.
Is there any compatibility issue or my f115/syn115 is dead?

Test the RadioHead library without the radios, by making a wire connection between the TX Arduino and the RX Arduino. Don't forget to connect the grounds.

If that doesn't work, you have probably either configured the library incorrectly or made a wiring error.