The keyboard sends 8 parallel bits through pins 5-12 and I believe the interrupt pin is 14. The question is, as an Arduino novice, how would I begin to interface with the keyboard?

Do you know which model?
I have a set of schematics at home for the Model B, so I may be able to figure it out. (later)

It's a Model B keyboard. I'm guessing I'd connect all the data lines to digital inputs and the power and ground to the relevant sockets, but I only get 0s when I output the data to the serial console no matter what keys I press. I can, however, control the LEDs, which is pretty cool. Any idea what I'm doing wrong?

Not until I get back home, and scramble around in the attic for a while!

A Description of The BBC Micro Model B Circuit Diagram

The following is a two-part article by Mike James that appeared in Electronics and Computing Monthly in April and May, 1985. They described the circuit diagram of the BBC Micro Model B. A quick Goo…

The keyboard is interfaced to the rest of the system by the system VIA (IC3) but for most of the time it is ‘free running’. In free running mode a four-bit counter (IC1k) is clocked at 1MHz and its output is applied to a one of sixteen selectors (IC3k). In this way each column lime of the keyboard is made active in turn. Any keypresses short a column line to a row line and this event is detected by IC4k which sends a signal to the system VIA which then causes and interrupt. Following a keyboard interrupt the free running mode is stopped and the keyboard handling software causes the processor to load column numbers directly into the four bit counter and row numbers directly into a one of eight selector (IC2k).
In this way the processor can test each key in turn to discover if it is pressed or not. (A pressed key will connect a row and column and when this combination is tested a pulse will be sent to the system VIA by IC4k).

So it is not as simple as you think. There is no need to use the interrupts but you need to look at the CA2 line to see the strobe when you press a key. 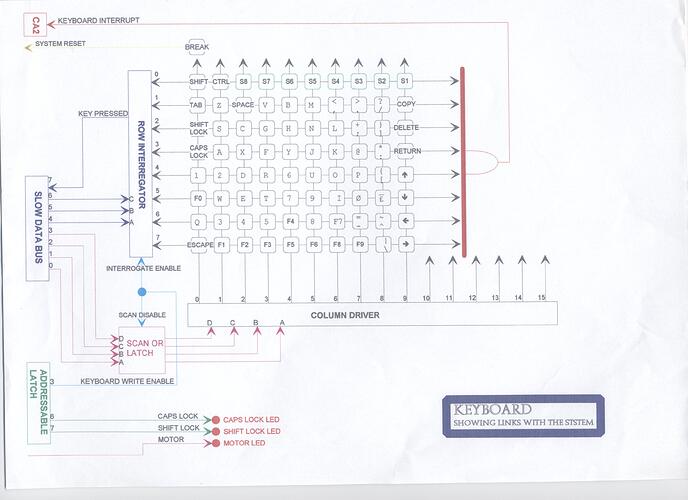