I know, best for what

I'm a beginner to this so I find myself jumping between projects because it seems like I need to do projects in order to solve problems for another project. In the process I'm tearing down setups a lot in order to take a step back and do something else. Plus reprogramming etc.

I did a little project for programming ATtiny 85's with the Arduino as isp and it works well so I was thinking about building another shield to either do ATtiny 84's or ATmega 328's. I noticed that adafruit has this: 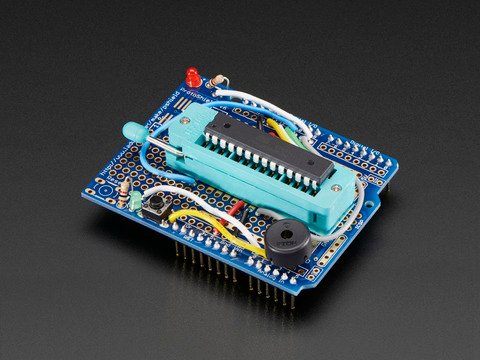 This shield kit pack will allow you to turn any Arduino into an AVR chip burner! It is specifically designed for people who want to program Atmega328P's to turn them into Arduino ...

for pretty cheap and I was thinking about ordering parts to put together a ATtiny 85 programmer.

Any advise on this strategy? Pros/Cons of each chip? I need to spend more time learning some code I guess but building stuff is fun too

I'm also a little confused about the ZIF holders regarding size etc.

You can buy a preasembled ISP for less. Which chip is the best depends on your needs. Once you know what you need usually the cheapest option is best.

Which isp would you recommend? I like the small size of the 84 but it would be nice to have something that wouldn't take a lot of fiddling to use the libraries.

I've been looking at FTDI cables or maybe a breakout board...

Would there be anything wrong with plugging a ZIF into my UNO, buying some 328's and programming them in place, then moving to the breadboard?

I highly recommend a teensy/teensy++ board for breadboard prototyping.
They are very small, need no programmer, can emulate many USB devices by simple s/w changes
and best of all plug directly into a bread board.
http://www.pjrc.com/teensy/

For playing around, and rapid prototyping using a breadboard nothing else is really as easy.

If you want to play with things like Attiny85's I'd recommend getting a cheap USBasp programmer
off ebay. They are only a few dollars and you can then program devices with it from the IDE using ISP and not have to use a bootloader
which not only saves flash space in the part but is somewhat problematic on a tin85 anyway.

If you want a combination ISP and serial port, the pololu devices are pretty nice: 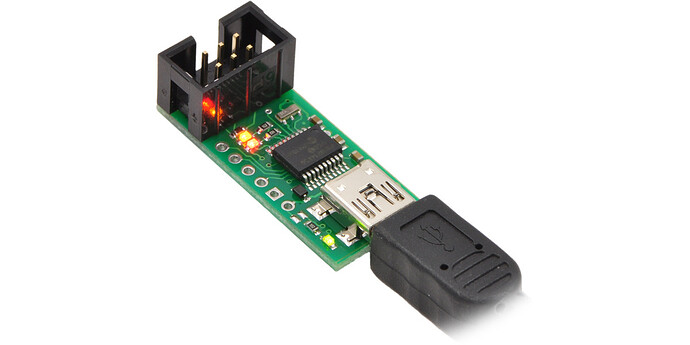 This device is a programmer for AVR-based controllers, such as our Orangutan robot controllers and the 3pi robot. The programmer emulates an STK500 on a virtual serial port, making it compatible with standard AVR programming software. Two...

Pretty nifty little device as you can use to program the AVRs in ISP but then also have a serial
port for talking to the sketch. Then there is the low speed oscilloscope function.

I have two AVRISPmkII and one el cheapo from Ebay. I should have never bought the cheap one. Getting it to run with Linux cost me more time than the saving was worth. The mkII is THE standard. There are better ones, but unless you are experienced you will save a lot of time using the mkII. Especially because a lot of people have the same one. So you can ask for help. With cheap copies you will find a lot less people that can help you.

I just edited my post with another question. Would it be possible/feasible/sensible, to just plug a ZIF into my UNO and use that to program 328's that could be transferred to the breadboard? Seems like that would be the cheapest/easiest route.

I would rather toast a $5 chip instead of messing up my Arduino. I figure I could buy a few crystals and a few 328's and have several Arduinos ready to go, or sit wired up while I hack on the other ones.

I just ordered a few of these:

A couple of these:

This is a high-quality, easy to use 28 pin [ZIF](http://en.wikipedia.org/wiki/ZIF_socket) socket that is 0.3" wide. Makes for easy connecting or programmin

Plus some of these:

This is a high-quality, easy to use 28 pin [ZIF](http://en.wikipedia.org/wiki/ZIF_socket) socket that is 0.3" wide. Makes for easy connecting or programmin

I also have some 22 uf caps on the way. I understand they must be used with the crystal.

I agree with @bperrybap with one addition... For programming ATtiny processors a Teensy makes a very nice programmer. A Teensy with pins and a breadboard are almost perfect for prototyping; sort of like an Arduino with the Ada Fruit shield on steroids. Like the Pololu programmer, the Teensy has a hardware serial port. If the Teensy is always put the same place on a breadboard it can easily be moved from project to project; everything else on the breadboard just stays in place.

Would it be possible/feasible/sensible, to just plug a ZIF into my UNO and use that to program 328's that could be transferred to the breadboard?

If the Teensy is always put the same place on a breadboard it can easily be moved from project to project; everything else on the breadboard just stays in place.

Yep.
I have several breadboards including one setup that is 4 breadboards mounted to a metal plate.
I currently have 8-10 active teensy projects on the breadboards but only use 1 teensy and 1 teensy++ that
I can move around for each project.
I have a POV project that I used a set of female sockets on perfboard that I can plug in a teensy.
See attached images.
I really like that everything can be powered from the USB as well.
--- bill 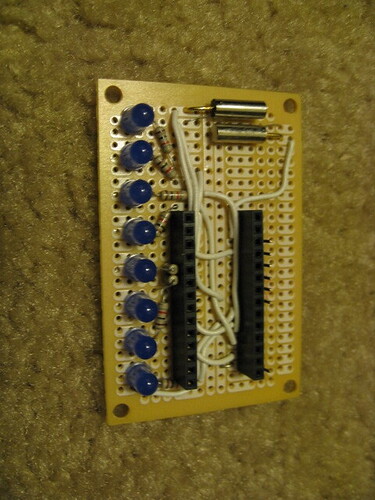 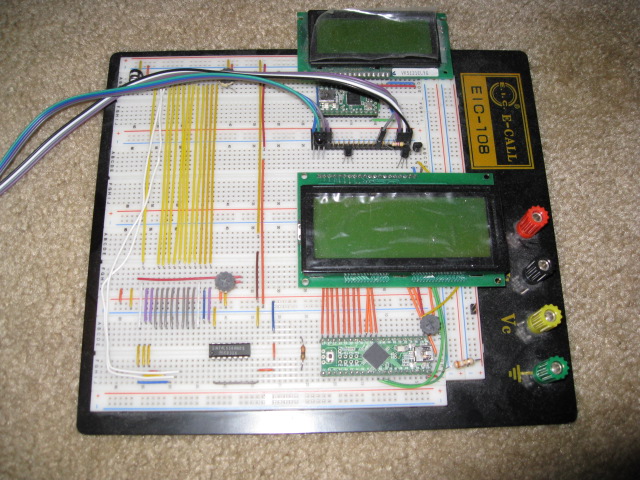 I'll definitely have to look into getting a teensy in the future!

Here's my little ATtiny 85 zapper that I put together and got working: 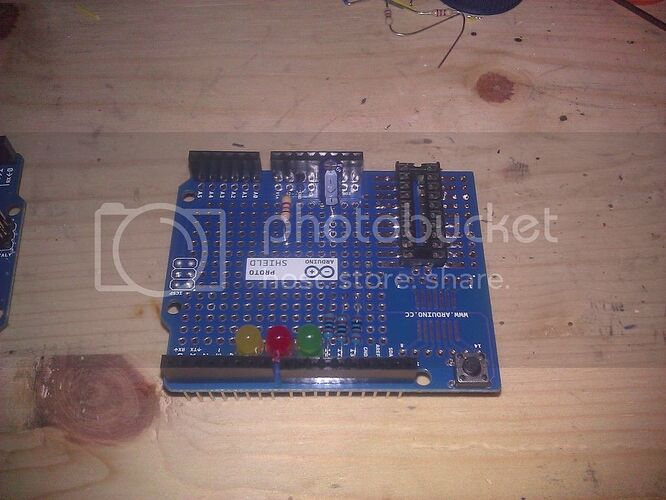 Many thanks to coding badly, strykeroz and others!

I'm leaning towards attempting a similar shield for 328's and mainly using my arduino as an isp. I built a little bot that is now brainless and I'd like to get him running again with a stand alone 328 for a 1st project.

Would it be possible/feasible/sensible, to just plug a ZIF into my UNO and use that to program 328's that could be transferred to the breadboard? Seems like that would be the cheapest/easiest route.

Unless your talking lots of chips to program then why not just setup a breadboard and program a few using this tutorial http://arduino.cc/en/Tutorial/ArduinoISP. Only takes a few minutes to setup and you could insert, program bootloader, remove a 328 in less than a couple of minutes each. If your ZIF socket fit in the breadboard then you can reduce the time to seconds per chip.

I got my parts in and finally have a free evening to tinker. Woo Hoo

I'm planning on building a protoboard programmer similar to the one I did for the ATtiny 85. (Pictured) The plan is to wire it up like the tutorial Riva posted only make it permanent on an Arduino Protoboard using a ZIF.

Any input/guidance/tips? This'll be my second project using a thru-hole board.

I have some 328P's without bootloaders but I got it sorted out with the 85's so here's hoping it goes smoothly!

The plan is to use a standalone 328 to run my little bot. If that works OK I'd like to make a Hoffduino but that may be reaching a bit for now

@hoff70:
"I also have some 22 uf caps on the way. I understand they must be used with the crystal."
No, you need 22pF. 22uF will likely not let the crystal oscillate.

I add an ICSP & FTDI type headers to my design, and program them on the board. No more schlepping chips in & out.
Make programming/sketch revising go a lot quicker.

Any input/guidance/tips? This'll be my second project using a thru-hole board.

Maybe someone else can answer this but if your trying to set fuse bits and bootload for internal 8Mhz oscillator then will having a 16Mhz crystal attached cause problems? If so then maybe a switch to enable/disable external crystal. You could dispense with the crystal altogether by using a modified ArduinoISP that supplies a clock from the programmer.

Riva:
if your trying to set fuse bits and bootload for internal 8Mhz oscillator then will having a 16Mhz crystal attached cause problems?

Include 220 ohm (or higher; 1K is typical) series resistors between the programmer and the target on MISO, MOSI, and SCK.

hoff70:
Would it be possible/feasible/sensible, to just plug a ZIF into my UNO and use that to program 328's that could be transferred to the breadboard? Seems like that would be the cheapest/easiest route.