Distance and direction with RF

I would like to know how the golf ball finder works: 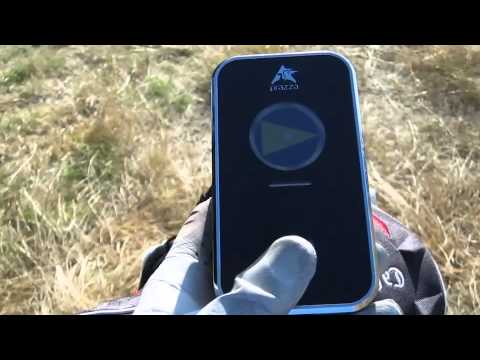 I am working with two Xbees. I know that the strenght of the signal (RSSI) could show the aproximate distance, but how can I get the direction? Triangulation? How do you think they make in the ball finder?

I would first jump at triangulation, three radios placed far enough apart should give either one or two dominant strengths depending on weather the target is on an edge or face of the triangle.

I will guess two directional radio receivers in the tracker, one on the left and one on the right. It compares the relative signal strengths of each radio to determine direction. I used this technique with a passive marine radar detector I designed years ago.

I don't know how the transmitter in the ball survives the impact of the club tho. It seems that would increase the cost beyond just replacing the ball.

Thank your for your prompt replies.
So I can triangulate the location of one thing (with an xbee) and my robot with two xbees (one on the left and other one on the right)? Are there any cheaper solution than using three xbees? Is it hard to program in Arduino environment?

On my response, I said direction, not location. Absolute signal strength is not a very accurate way to determine distance. Too many variables involved.

Could put a single xbee in a directional antenna ( dish ) then spin it looking for the strongest signal, but its also no location finder.