A little over year old circuit board looks very odd. It had Immersion Tin (edit: probably Silver) pads, now the pads won’t take solder and look like a fungus has got all over them. All I can find that describes this is “Tin Pest”. Anyone else ever see this sort of thing with immersion tin. 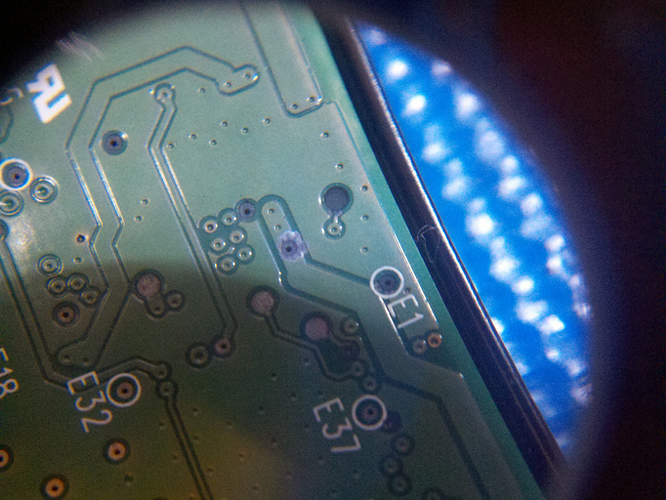 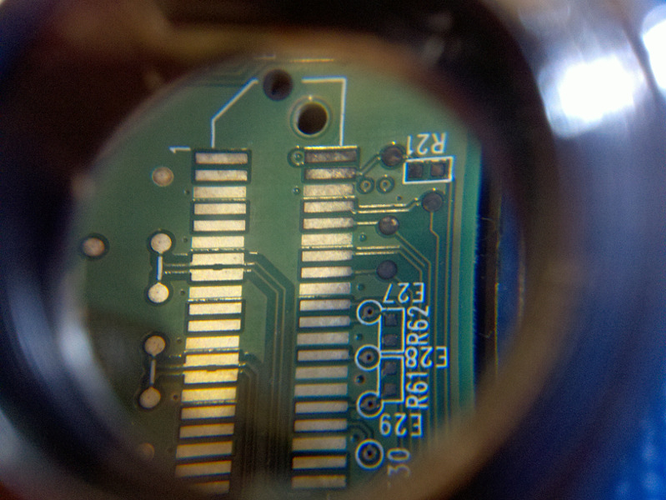 Were the boards in a high humidity environment?

No, it was in Arizona, not outside but not always room temperature either. Dry most of the year but we do have a season with some rain which it went through (the due point gets above 50°F for 8 to 10 weeks), but that was some time ago. The circuit failed on Wednesday and got replaced. But I have seen some old Immersion tin plated circuit boards look like that in the past, and never could figure out what it was. If it was biologic it would probably not like the Tin pads. Attached an image of a new board with bright immersion tin pads.

On that “FailedBoard2…” image attached in post #1 is what might also be creep corrosion. This* article is saying that is from humidity and a galvanic reaction between silver and copper to make the “chia pet” around the via. But now I am confused rather this is Immersion silver or tin, maybe the gray is just tarnish. 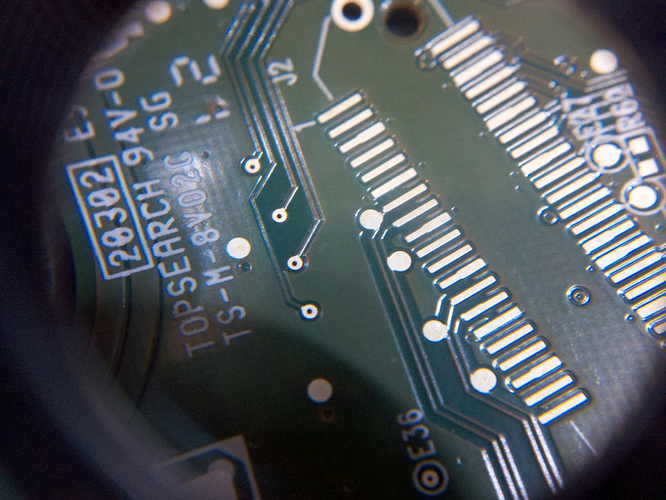 Everything I can find on the internet indicates the enemy of tin pads is a sulfur-rich environment. Maybe the manufacturer is inadvertently leaving sulfur compounds on the boards.

Where are you getting the boards?

It was in a plastic case with what looks like rubber shock absorbers attached. I am thinking both may be the source of the sulfur. The board was from a USB WD hard drive, and looking over the the other boards I had attached to the same system (they look to have an OSP finish) I see no tarnish/gray-tin or chia pets (dust does not count). Looking around on the internet I see lots of references to plastic outgassing sulfur compounds, but rubber is an even a bigger problem.

I have images of the new board, so in a few months I will try to remember to open it and get another set of images, to see if the problem duplicates.

What is the dew point while that is happening?

For the last three months we have been dry (due point less than 35°F) except a few storms that moved through. So I don't think it is taking much moisture to grow the "chia pet", but perhaps the dry slows it down.

I have had problems with soldered PC boards too. After some months everything still looks good but there is no electric contact. The wire or whatever just lifts off and leaves a dull grey pad.

@LMI, that prompted me to do some more searching and Intermetallics* started to show up in the results. It is another possibility for the gray pads on my boards, but may fit what you have seen even better. Intermetallics does not seem to be driven by moisture so sounds like a good clue.

That Intermetallic link is interesting. There are some interesting topics one directory up
http://www.ami.ac.uk/courses/topics/
I hope they are useful.

I am a bit worried about this, low reliability is not good at all. Leaded and unleaded tin and mixing them does not make things easier. Those problems I described were in leadless PW boards and made with professional equipments. I dare not think what happens when if I use leaded solder with some leadless new boards and components.

Actually, what is happening is the tin is changing its crystal structure. Keeping it in a cool place causes this.
Now you have "gray tin"!

The solder these days is leadless, that is tin, but isn’t there still some other subtances in the solder tin which prevent tin pest.

Tin pest is an autocatalytic, allotropic transformation of the element tin, which causes deterioration of tin objects at low temperatures. Tin pest has also been called tin disease, tin blight or tin leprosy (lèpre d'étain). It was observed in medieval Europe that the pipes of pipe organs were affected in cool climates. As soon as the tin began decomposing, the process accelerated. With the adoption of the Restriction of Hazardous Substances Directive (RoHS) regulations in Europe, and similar r...

Also, my board was above 20 degrees C, so the gray pads are sounding less like tin_pest in my case.

I think that both tin_pest and intermetallic formation result in a change in the crystal structure. In the case of intermetallic formation, copper is entering the matrix but since it does not fit perfectly it causes things to reorganize. From reading various articles, I gather that a tin alloy does not suffer from tin_pest, but it is not yet clear to me what ratios are needed. From the reading it also looks like intermetallic growth is required for the solder to wet, but then needs to be limited by a nickel layer or a lead rich layer.

One thing I have concluded is that if I want to solder a copper wire (which does not have a nickel layer) I will need to use a massive glob of lead free solder so that the wire is fully surrounded, or use lead solder.

So this is making me wonder if lead is really a problem in electronics, I fully understand why to remove it from petroleum gasoline, and plumbing (although this may explain a hot water line that pulled apart, which was also very odd).

Wow, this gets stranger and stranger! If you want to solder a copper wire, just tin it first.

@Isaac96, haha, yes it seems to be getting stranger to me also, so why would tin help since that is what makes the Intermetallic in the first place... see link in post #8

I opened the replacement WD chassis again today, and the board inside has tarnished (see images). The frame is metal this time (not plastic), and the tarnish is mostly in one area, but I don’t see a chia pet (yet). 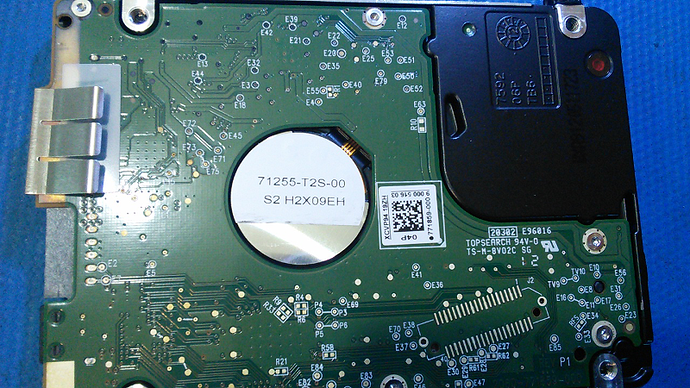 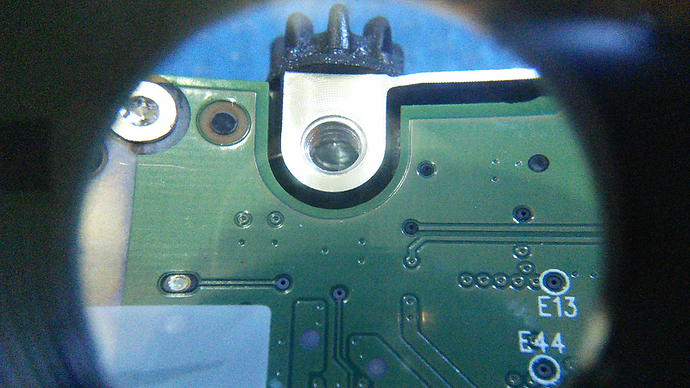 Is this some kind of material problem in the solder tin. I thought that the problems in lead free solder were solved.

I think that it is not very probable that something in an organic compound like plastic would change the crystal structure of tin.

I read the plating page. I wonder. They talk about self life. My boards were soldered as new (we were in a hurry).

The original search was for why the circuit board pads had turned dark. I had turned up tin-pest, however, LMI pointed out gray pads after things lifting off which pointed me to intermetallics (link in post #8) as another possibility for the gray pads. Intermetallics form as copper get into the tin. Both intermetallics and tin-pest are crystal changes in the structure of tin (phase).

I am not ruling out tin-pest, or an intermetallic, but at this time think tarnish from sulfur seems more likely, and it happened much quicker than I had expected on the new boards. The chia pet reference is from the link in post #2. It refers to creep corrosion and involves sulfur and silver (as tarnish) that cause a galvanic reaction with copper. Sulfur is used for vulcanization* of polymers, so is found in plastics and rubber, both of which outgas** with heat and age. Creep corrosion can be clearly seen in the image of my OP, but I had no clue what it was at the time.

Another problem that keeps showing up when I search is Tin Whiskers*, which again is related to tin-rich surfaces. Some are saying these are extrusions caused by tin-pest.