If you ever thought about making a logic probe to help you with digital electronics, this project may be for you.
I have attached images showing a finished logic probe project and the PDFs include a 1:1 PCB layout for the probe.

This Logic Probe reacts to pulses as short as 50nS.
Signals up to +20 volts can be monitored.
This Logic Probe has 3 output LEDs to indicate what is happening on the probe input.
The following are the LED conditions when the probe is touching a pin with:

Putting the “Pull-Up” switch in the up (closed) position connects a 100K pull-up resistor on the probe input (useful for floating inputs or open collector/drain outputs. 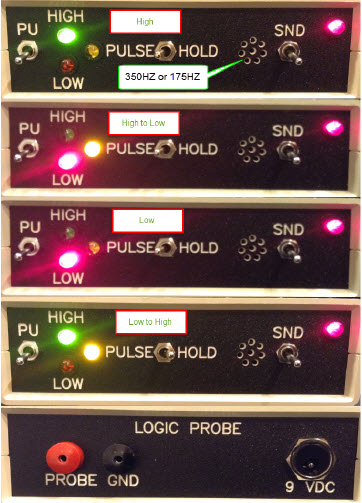 One per chip, right next to the chip's supply pin? Not really.... Now with a good
groundplane it's probably not critical, but there's no consistent ground or supply
grid.